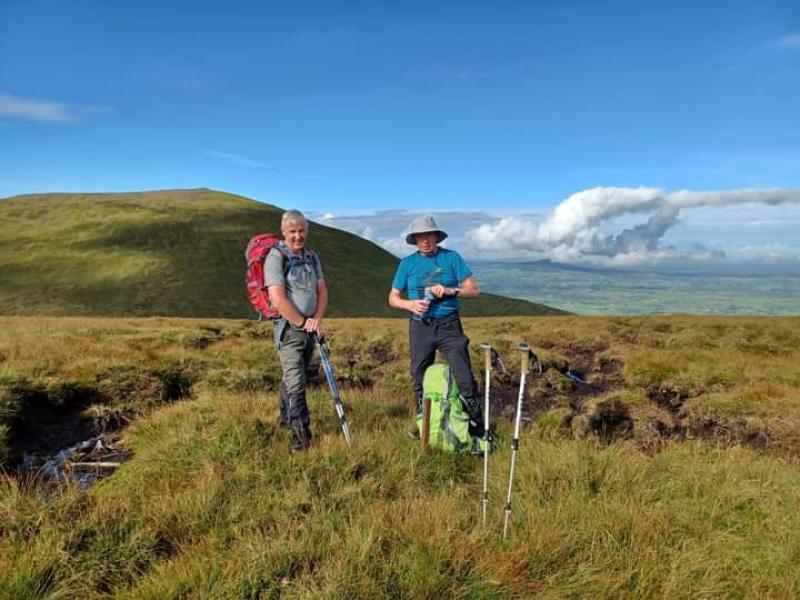 Willie Fahey and Eddie Morrissey on the Ten Galtee Peaks Challenge in September 2021.

This is the third hillwalking challenge organised in recent years by Cashel Lions Club.

In 2020 it was a Three Peaks Challenge involving a climb of Galtee Mór, Knockmealdown and Sliabh na mBan and in 2021 the challenge was to climb the Top Ten Peaks in the Galtees.

This year’s goal is to climb the steep and rugged slopes of 10 peaks in the Knockmealdown Mountains in one day, Saturday, October 1.

The plan for this year’s challenge is to start near the village of Goatenbridge and climb to the first peak, Crohan West.

From there Willie and Eddie plan to head in a westerly direction climbing a total of 10 peaks including Knockmealdown (794 metres) and Sugarloaf Hill (663 metres) which featured on RTE’s Hell Week earlier this year.

The hillwalking challenge will finish at the car park near Crow Hill, between Clogheen and Ballyporeen.

The trek is estimated to be approximately 20 kilometres and the plan is to complete the Up and Down the Knockmealdowns Challenge in approximately seven hours.

Each member of Cashel Lions Club has a sponsorship card and will appreciate sponsorship for the club’s major fundraiser. You can also support the challenge through an online fundraising page at www.idonate.ie/ fundraiser/cashellionsclub knockmealdownschallenge.

The Up and Down the Knockmealdowns Challenge will help fund a range of community service projects organised annually by Cashel Lions Club since 1961.

At the moment plans are at an advanced stage for the Senior Citizens’ Holiday which will see a group of approximately 50 travel to Sligo on Saturday, September 17 and return on Thursday, September 22.

The year’s holiday is organised by Willie Fahey from Cashel Lions Club and the Cashel group will also be accompanied by a group from Cahir led by Patsy McGuirk from Cahir Lions Club.

Leaving Certificate students and their parents are also reminded that application forms and further details on the annual Corby/Meaney Bursary can be obtained by contacting the Cashel Lions club secretary at cashellions@gmail.com

The closing date for applications is Monday, October 3.

Cashel Lions Club appreciates the generosity of the people of Cashel and surrounding areas for the support they gave to the hillwalking challenges over the last two years and will be grateful for similar support for this year’s Up and Down the Knockmealdowns Challenge.