RACING: Your guide to Thursday’s excellent card at Leopardstown 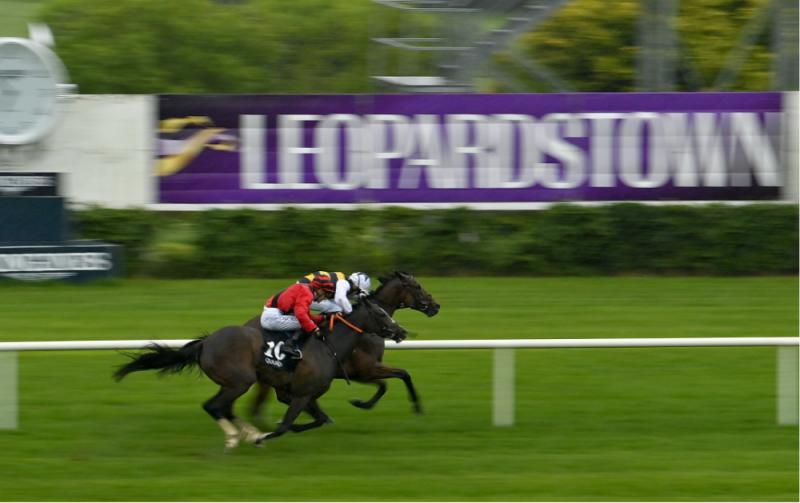 Leopardstown Racecourse hosts a cracking midweek card on Thursday evening with a seven-race card for punters to enjoy. The action gets underway at 5.30pm and finishes at 8.30pm.

Leopardstown Racecourse hosts a cracking midweek card on Thursday evening with a seven-race card for punters to enjoy. The action gets underway at 5.30pm and finishes at 8.30pm.

The going is currently Good, Good to Firm in places and watering is taking place to maintain the ground. We have previewed the pick of the action and you can find the best odds on the SBK Sportsbook App

One of the highlights on the card is the €50,000 G3 Tyros Stakes at 6.30pm. Five runners go to post and they are headed by Age Of Kings for Aidan O’Brien. He scored at the Curragh in good style in June, before filling seventh in the Coventry Stakes. He was also not disgraced when fourth at the Curragh on his latest start in the Railway Stakes and the form of that race has already worked out with Blackbeard going on to win the Prix Robert Papin recently.

Pearling Path is another fascinating runner having scored at Fairyhouse in May on his second career start. He then went on to finish a length second in the Chesham, Stakes at Royal Ascot and he looks sure to go well in this event.

Hellsing is also interesting having made a winning debut at the Curragh in May. He is open to any amount of improvement. The same comment can be made about Proud And Regal. A son of Galileo, he also made a winning debut at the Curragh last month and he has to be respected. Voce Del Palio completes the five runners having scored at Roscommon in May, before filling second at Leopardstown last time out.

The €50,000 G3 Silver Flash Stakes (6.00pm) is the other highlight on the card with six runners going to post. Aidan O’Brien saddles Never Ending Story who clearly has to be at the top of the shortlist. Third on her debut, she showed the benefit of that experience when powering to a smooth win at the Curragh last time out. She looked a hugely exciting prospect on that occasion and should go well in this event.

Zarinsk interestingly beat Never Ending Story on debut and she was fourth in a Group Two event when last seen. She is clearly a fascinating runner based on that initial meeting. That race also included Zoinnocent who was sixth, before scoring at Gowran Park when defeating La Dolce Vita last time out. With Love was also fourth in the same maiden before scoring at Leopardstown, with It’s Showtime Baby completing the six runners.

The 12-furlong event at 8.00pm is another interesting event as it features €280,000 purchae Waterville who opened his account at Limerick last time out and Nectarine who landed a handicap at Fairyhouse earlier this month. However, Point King is the one they have to beat after he powered to a smooth win at Fairyhouse last month.