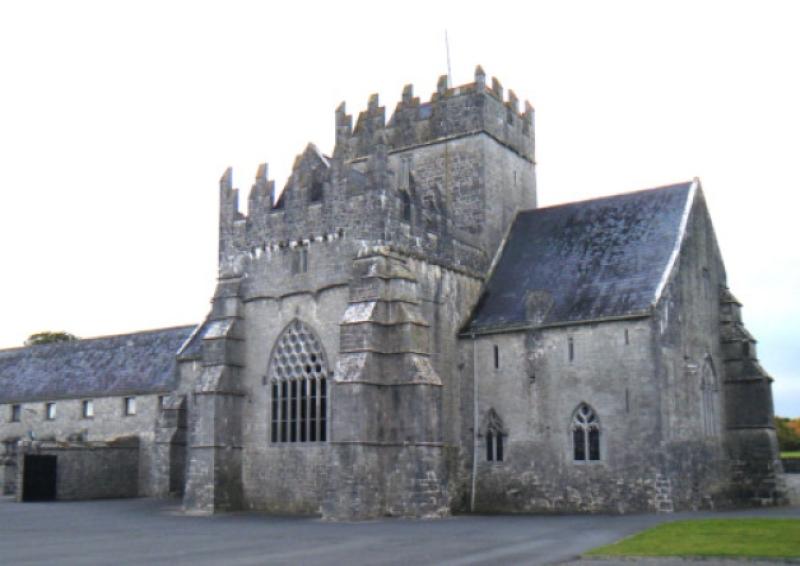 The uniqueness of Holy Cross Abbey cannot be over-emphasised. For hundreds of years, like no other abbey, it had a relic of the True Cross to which the public had access. A lot of the ruins were intact when the restoration was taking place forty years ago.

The uniqueness of Holy Cross Abbey cannot be over-emphasised. For hundreds of years, like no other abbey, it had a relic of the True Cross to which the public had access. A lot of the ruins were intact when the restoration was taking place forty years ago.

A great part of the cloister buildings were preserved due to conservation work ﬁnanced by Charles W. Wall in the 1800’s and by the Ofﬁce of Public Works in the 1900’s. Holycross has the best preserved night stairs of any abbey in Ireland. The Abbey has a great mix of styles and features that blend together to make a uniﬁed whole. No two windows are alike giving us a glimpse of the wealth of craftmanship available at the time of the major reconstruction in the early 15th century. This was done under the patronage of the Butlers, the Earls of Ormond. The beautiful east window has ﬁne netlike tracery; The ﬂame window in the north transept is a delight. Holycross has the widest range of window patterns of any medieval building in Ireland. There are superb structures and features that draw superlatives from the experts. The Sedilia or The Grave of the Good Woman’s Son as it is often called is the highpoint of Cistercian art in the country.

Roger Stalley in his book on Cistercian monasteries describes the Sedilia as (the most sumptuous of all Cistercian ﬁttings, indeed the ﬁnest piece of church furnishing in medieval Ireland). In 1891 Rev. Denis Murphy SJ translated and published the (Triumphalia), the manuscript written in the monastery in 1640 AD. In his introduction to his book he wrote (...for assuredly in Ireland there is no other work in stone... equal to it in graceful outline and richness of detail).

Today we can still marvel at the beauty of these structures. The same high standard is seen in the waking bier. It has outstanding carvings in blue limestone. They include ﬂoral and leaf designs, animals, birds and even a small feline mask. This structure is called the waking bier because it was supposed to be the place where the monks were laid out before burial. However it seems too ornamented for such a purpose and it would have carvings of the apostles and saints if it were a tomb or waking bier. Some experts believe it to be the shrine where the Relic of the True Cross was displayed for public veneration. There is a carvings of a man holding two lions on leads above the south west corner of the shrine. Historians now surmise that these lions were ‘guarding’ the relic of the True Cross.

In the sanctuary area of the church and in the roof of the north transept in particular are some of the ﬁnest ribbed vaults of the medieval period. Of the three bells in the belfry the oldest one is called Michael after the archangel, who is the patron saint of the parish. It is reputedly the oldest church bell in Ireland dating from before 1250 AD.

There are beautifully decorated doorway and cloister arches. The arch at the chapter house door has lovely billeting that shows Moorish inﬂuences. It is the only medieval chapter house doorway in Ireland that has survived intact. Across the cloister garth is the amazing whispering arch which was used for confessions. The priest could listen at one side while the penitent whispered his faults into a carved grove at the other side. The priest alone could hear the whisper. This prevented the spread of disease. The decorated arcading of the reading cloister has few rivals in the loveliness of its design. There is plenty more to tell in stone, folklore, legend and history. Holycross is full of surprising treasures.

Tours continue every Wednesday at 2 pm and every Sunday at 2 pm. Times will change to adapt to any religious events taking place in the Abbey. The tours are conducted by trained volunteers supported by Holycross Community Network. Of course, with advance notice,

we can arrange tours outside of these times. For more information, bookings and costs please phone 086 1665869 or email holycrossabbeytours@gmail.com.