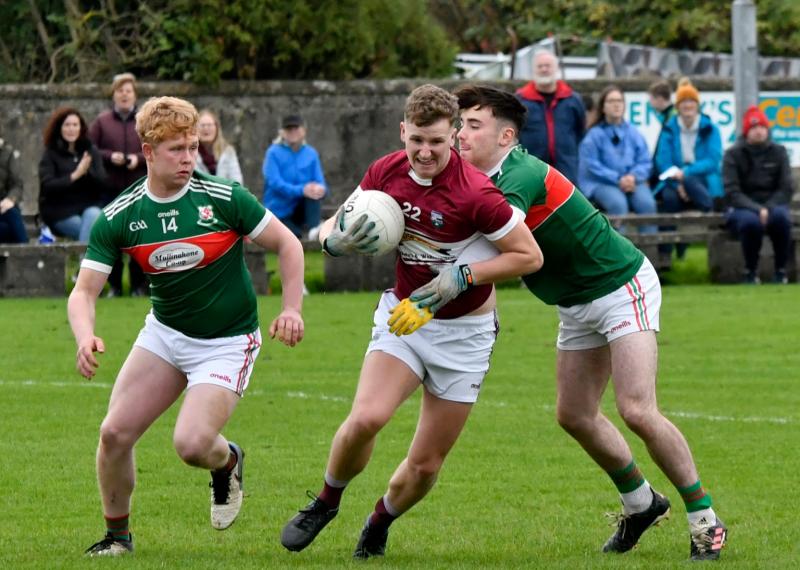 SOUTH TIPPERARY UNDER 19 'B' FOOTBALL FINAL

On Saturday last the South Tipperary U19B Football Championship final was played in Fethard in dry conditions with a wind blowing up the field assisted Mulllinahone.
In the opening half with both teams evenly matched scoring chances were few resulting in both teams level at the first water break at 0-2 each.
The first score came in the fourth minute when Danny Dunne pointed from play for Mullinahone replied to in the 10th minute by Ardfinnan when a free, nearly 40m out, was kicked straight between the posts by Andrew Browne kicking out of his hands.
Within a minute Dylan Webster kicked a free from 20m out for Mullinahone and in the 13th minute Eoin Kenna, a roving full forward for Ardfinnan, scored the levelling point for 0-2 each when referee Seanie Peters called the first water break.
After that resumption the pace of the game increased when Danny Dunne, the best Mullinahone player on view, scored a brilliant goal immediately followed by a point from the boot of Dylan Webster.
Ardfinnan struck the crossbar but with Andrew Browne running onto the ball he kicked into the net for a goal to put the game back in the melting pot.
Mullinahone were winning all the midfield duels and created three excellent chances which produced two points from play by Danny Dunne and one from a free by Dylan Webster to leave the half-time score Mullinahone 1-6 Ardfinnan 1-2 .
The wides tally in the first half was Ardfinnan 5, Mullinahone 1
After the break Ardfinnan introduced Cian O’Mahony and with Aaron Poliunas they steadied the midfield dominance and wind advantage carried the game to Mullinahone in particular through Aaron Poliunas Ardfinnan caught some great balls with Cian O’Mahony scoring the first point on his first touch.
In the 40th minute Ardfinnan added a second from a free out of his hands by Andrew Browne from 45m.
Mullinahone then brought out Danny Dunne from corner forward and he set up Steven Hickey for a point just before the second water break to leave the score Mullinahone 1-7 Ardfinnan 1-4.
In the final quarter the tenacity of Mullinahone was tested with Danny Dunne and Conor O’Brien very much to fore on the counter attacks resulting in another point from Steven Hickey to go four up and five minutes left Ardfinnan continued to take the game to Mullinahone at pace resulting in two points in two minutes. The first of these came from a free from Andrew Browne and the second a long range effort from Luke McNamara.
With time running out Mullinahone held on and overall deserved their win with some great defensive football particularly in the final quarter despite being down a man when Josh Rowan received a second yellow followed by a red card.
Mullinahone had excellent displays from Conor O’Brien, Rian O’Halloran Captain, Dylan Webster, Steven Hickey, Danny Dunne.
Prominent for a gallant Ardfinnan were Tadg Hogan, Jack O’Neill, Andrew Browne, Eoin Kenna and their best player Aaron Poliunas who all caught the eye.
MULLINAHONE: Che Delaney Scott. Luke Vaughan, Sean O’Dwyer, Colin Kinnane, Diarmuid White, Conor O’Brien, James Cody, Patrick Hayes, Rian O’Halloran (Capt), Eoin O’Dwyer, Dylan Webster 0-3(1f), Steven Hickey 0-2 (1f), Danny Dunne 0-3 Josh Rowan, Daniel Vaughan 1-0.
ARDFINNAN: David Butler, David Betts, Tadg Hogan, Kevin Burke, Sean Cunnigham, Jack O’Neill, Philip Betts, Luke McNamara 0-1, Aaaron Poliunas, Gideon Buchwald, Andew Browne 1-3 (2F), Cian Walsh 0-1, Adam Quirke, Eoin Kenna 0-1.
Subs Used Cian O’Mahony, Adam Carrigan
Referee Seanie Peters (Aherlow).