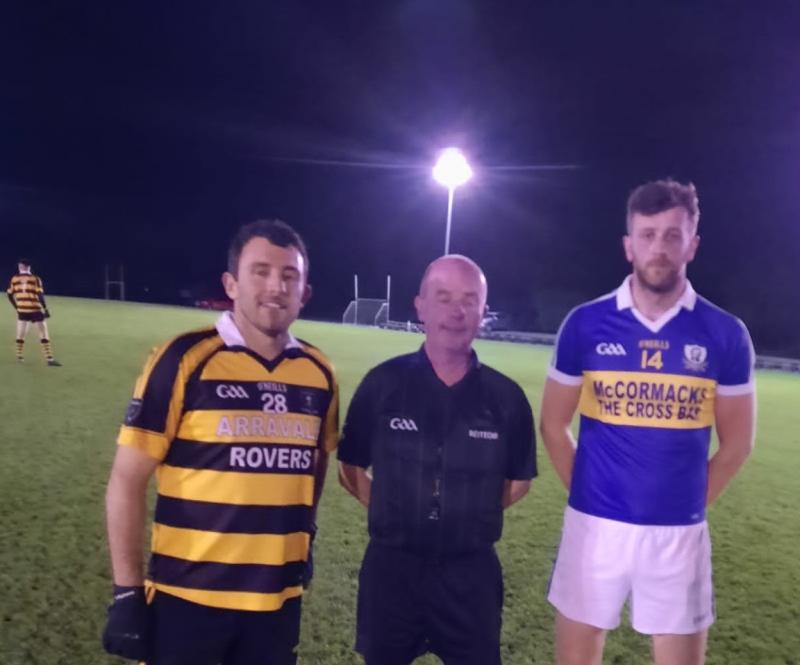 Sean Treacys are through to the final of the AIB Tipperary West Junior A Football championship following their nine points victory over Arravale Rovers at Golden on Friday night.
The 2019 champions and current holders, as the 2020 championship wasn’t concluded due to the Covid situation, were in no mood to relinquish their crown as they laid down a marker from the outset. They were stronger in most departments, defended well, and took their scores far easier than the opposition. This was an all round team performance from the holders, but Mikey Feehan and Padraig O’Leary were always prominent, with their ability to capitalise on a scoring opportunity. Feehan kicked three long range points as well as being a dominant figure around the middle of the park.
Treacys were first off the mark in the opening minute when Mikey Feehan put over at the far end. Feehan was again on target, a minute later, with a fine long range effort. Arravale were slow to settle and with the Treacys defence in tight formation, built around Seanie Ryan (Rogers) at centre back and Andy O’Brien at full, scores were always hard to come by.
Padraig O’Leary kicked the first of his five points on six minutes to stretch the lead to three as Arravale came more into the game. However they found it hard to penetrate the Treacy back division, despite switching their formation. Paddy Carey hit a point from close in before the water break to put his side four to the good by the quarter hour mark.
Padraig O’Leary kicked his second of the night following the restart before Jack Hogan, from a placed ball, opened the town team’s account. However they failed to follow up on this score as the Treacys continued to dictate the pace and flow of the game. Padraig O’Leary and Mikey Feehan added to further points to leave the half time score, Sean Treacys 0.7, Arravale Rovers 0.1.
Rovers needed a good start after the break, but this failed to materialise, as Treacys were in no mood to surrender their title without a good fight. They continued to defend well, not allowing any room to the opposition and closing down the man with the ball at every opportunity.
Padraig O’Leary kicked his fourth of the night from a placed ball, six minutes into the half, before John Lowry, also from a placed ball, doubled Arravale’s tally. Pat Dawson kicked a wonderful point from out on the sideline, on the thirteen meter line, for what was definitely the score of the night. He followed up with another from open play, before O’Leary stretched the lead to nine as the water break approached.
For the final quarter Sean Treacys emptied their bench, but this did not alter the game. Adam Dunne had the last say on the scoreboard, when he converted a forty five meter free, to leave the final score, Sean Treacys 0.12, Arravale Rovers 0.3.
Sean Treacys will be happy with this performance going into the final, but the can expect a more sterner opposition from Kickhams, who overcame Emly in the other semi final.
Arravale were always playing second fiddle and their failure to score from open play during the hour was a contributing factor in the end. However, the didn’t throw in the towel and took the game to the opposition right to the finish.
Scorers and Teams:
Sean Treacys: Padraig O’Leary (0.5, 3 frees), Pat Dawson (0.3,2 frees), Mikey Feehan (0.3), Paddy Carey (0.1).
Arravale Rovers: Jack Hogan (0.1 free), John Lowry (0.1 free), Adam Dunne (0.1 free).
Sean Treacys: Shane Stapleton, Willie Mackey, Andy O’Brien, Brendan O’Dwyer, Damien Dunne, Seanie Ryan (Rogers), Philip Deegan, Mattie Feehan, Mikey Feehan, Darragh Kennedy, Paddy Carey, James Deegan, Pat Dawson, Padraig O’Leary (Captain), Brian Carey
Subs used; Sean Carey, Eoin Sheldon, James Rochford, Stephen Rochford, Cathal Kennedy.
Arravale Rovers: Patrick O’Donnell, Brian Roche, Jack Lowry, Richie Lohan, Jack Ryan, Roger O’Connor (Captain), Shane Maher, Seamus Kinane, Andrew Richardson, Eoghan Lonergan, Tony Byrnes, Ger Halligan, Adam Dunne, John Lowry, Jack Hogan
Subs used; Jack English, Jordan Doyle, Eoghan Lonergan, Conor Leahy.
Referee: David Grogan (Aherlow).