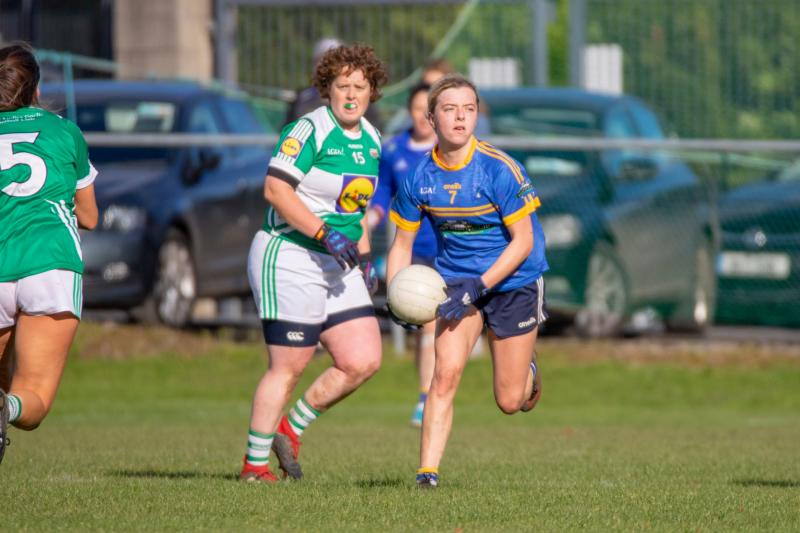 Brian Borus dethroned the reigning Senior A Camida Ladies Football Champions Cahir in an epic battle which was pushed into extra time on Sunday afternoon last in Canon Hayes Park, Bansha.
A tough battle from beginning to end Brian Boru’s were in dominant form in the opening half. Borus raced into an early six point lead with the aid of a brace of goals from Mairead Morrissey. Cahir kept themselves in the game with points from Roisin Howard (0-5) and Ann Marie O’Gorman (0-1). However Borus made the most of their wind advantage and went in at the break 2-8 to Cahir’s 0-6.
On the resumption Cahir now playing with the aid of the wind began to eat into the lead firstly with a point from Roisin Howard shortly after the throw in. Boru’s response came swiftly and Caoimhe Ryan snuck in to claim the third goal of the game. Cahir trailing by ten points now were calm in their come back and picked off four unanswered points to pair the gap back to just six again. Mairead Morrissey popped one back. However Cahir had steadied the ship and again they pulled Borus back to within touching distance with points from Roisin Howard (0-1), Thelma Lonergan (0-1) and Anne Marie O’Gorman (0-1) before Roisin Howard breached the Boru’s defence to goal in the 53rd minute Anne Marie O’Gorman followed up with a point to draw the sides level with just four minutes left on the clock. Both sides defended valiantly knowing the next score would be crucial. The game went injury time and Eimear Myles stepped with a vital point. Cahir weren’t finished and in the second minute of injury time Eileen Flannery scored a point to send the game into extra time.
Extra Time
Cahir struck first with a goal from Anne Marie O’Gorman putting them ahead for the first time since the sixth minute of ordinary time. Borus stormed back into the game registering five unanswered points to lead by (0-2) at the break when the scoreline read Brian Borus 3-15 Cahir 2-16.
Anne Marie O’Gorman was again on the score sheet when she opened the scoring for this half with a point. Borus powered on again from there to the end with four unanswered points to run out five point victors and to set up a much anticipated Final versus Aherlow on Sunday November 7, in Lattin.
Teams and scorers
Cahir: Aoife O’Donnell, Geraldine O’Donnell, Aoife Corcoran, Eileen Flannery (0-1), Rachel O’Donnell, Emma Buckley, Caoimhe Grace, Rosanna Kiely, Aoife Cashman, Thelma Lonergan (0-1), Roisin Howard (1-9), Anna Downey, Niamh Costigan, Anne Marie O’Gorman (1-5), Orla McEniry (0-1). Substitutes Fiona McEniry, Abby Noonan, Claire Hickey, Clara Fahey, Elma Casey, Emma Casey, Niamh Ryan, Rachel Prout
Brian Borus: Nora Noonan, Annette Meaney, Laura Morrissey, Nikki Gilmartin, Shauna Maher, Jennifer Grant (0-1) Shona Lang, Eimear Myles (0-3), Cliona O’Dwyer (0-5), Kit Martin, Maureen Murphy (0-1), Caoimhe Ryan (1-2), Caoimhe Condon (0-1), Mairead Morrissey (2-6), Alanna English Substitutes, Helen Burke, Roisin Condon, Sinead Norris, Marie Claire Murphy, Lauren O’Brien, Ciara Morrissey, Grace Healy, Alison O’Mahoney, Trisha Hickey, Shannon Morrissey.