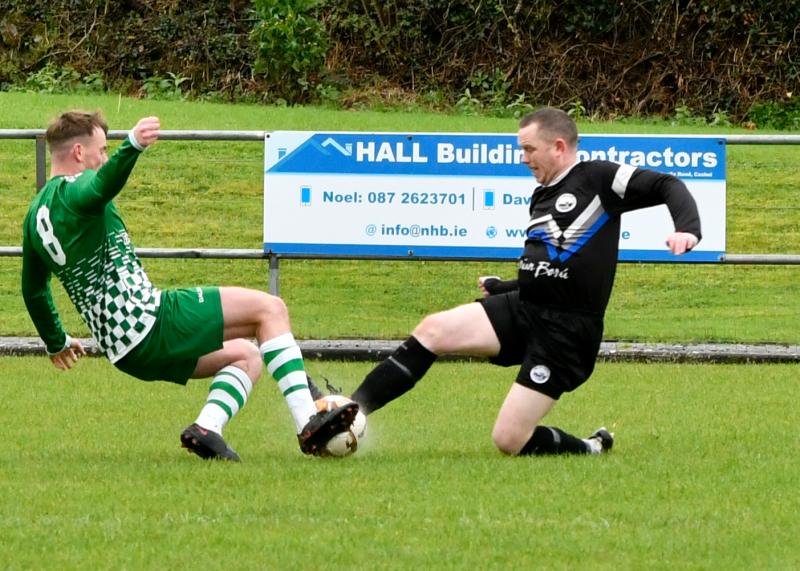 Premier League side Cashel Town hosted Division 3 league leaders Clerihan in a game that had the potential to be a giant-killing tie, such was the good form the lower league side carried into the game. But the hosts were in no mood to be caught and while it took well into the second period, they eventually overcame a dogged Clerihan side.
The home side were on top from the beginning but missed some decent openings against a very organised visiting team.
In the second half Cashel Town upped the intensity and finally found the breakthrough on 60 minutes when Eoin Byrne headed in to make it 1-0.
The hosts were passing the ball better now and the lower league side began to tire, offering up more opportunities and were punished again seven minutes later when Cashel Town added a second with a well-taken goal from Callum Meagher.
The home side could have added a few more before the end but will be happy enough that they venture onwards, where they will face a Titanic struggle to get into the open draw section of the competition.

Billed as the tie of the round, two of the big teams were on display on Sunday when Peake Villa entertained St Michael’s in this second round tie up at the Tower Grounds on Sunday afternoon in what was a very miserable evening, with plenty of wind and rain.
It also turned out to be a miserable day for the home side, as they were comprehensively put to the sword by their Premier League rivals.
The game started at a quick pace and the first real chance fell to the home side when Pippy Carroll made a good run and found space in the fifth minute but his shot went just wide of the post.
There were half-chances for both sides but the visitors’ best chance came in the 27th minute when Jimmy Carr’s free kick hit the upright.
The breakthrough came three minutes later when a ball that dropped in behind wasn’t dealt with by the Villa defence and Edmund O’Dwyer was on hand to score.
The home side pushed hard to get level and came close five minutes before the break from a free kick that was well saved by Adrian Walsh in the St Michael’s goal.
The home side started the second half like they finished the first, trying to get back into the game. But it was the visitors who struck again, extending their lead when another ball that wasn’t dealt with in the home defence fell to O’Dwyer, who made no mistake to score again and make it 2-0.
Things went from bad to worse for Villa when a John O’Brien effort looked harmless but it ended up in the hosts’ goal to make it three-nil fifteen minutes from time. Ronan McGuire had a great chance for the home side shortly after but his shot went over.
And substitute Robbie Stapleton also came close but there were to be no more goals and the Saints went marching on.

Cullen/Lattin 5 Powerstown 3
On a very wet Sunday in Aisling Park, Cullen/Lattin got the better of newly- formed Powerstown but didn’t have it all their own way in a very entertaining Munster Junior Cup tie.
The home side dominated the early stages of the game, and in the 12th minute Darren Neville’s right-footed shot nestled in the bottom corner from 20 yards out to give them the lead against the Clonmel visitors.
Seven minutes later Tony O’Neill doubled his side’s lead when Alan Hayes squared the ball to him to slide in and steer the ball home.
On 25 minutes the visitors got a goal back when Oisin Napier showed good feet on the edge of the box and his right-footed shot deceived the stranded ‘keeper to float into the bottom corner.
But the hosts were in no mood to relinquish control and re-established their two- goal advantage just after the half-hour mark when Russell Bowes showed good feet for an excellent finish inside the Powerstown box.
Two minutes from the break John Breen rose highest to head home a Mikey Stokes’ corner kick to put the hosts 4-1 up and looking good to advance into the next round.
Five minutes after the hour mark the visitors were awarded a penalty when a Cullen defender handled in the area, and Oisin Napier finished his spot kick well to give his side hope.
But Cullen/Lattin quickly put paid to any hopes of a comeback when 11 minutes from time when Thomas O’Mahoney squared to Fiachra O’Grady, who unleashed a powerful shot to the top of the net.
The last goal of the game went to a game Powerstown side when a well-delivered Oisin Napier corner was headed home by Shane Ryan, but it was no more than a consolation as the home side moved onto the next round.