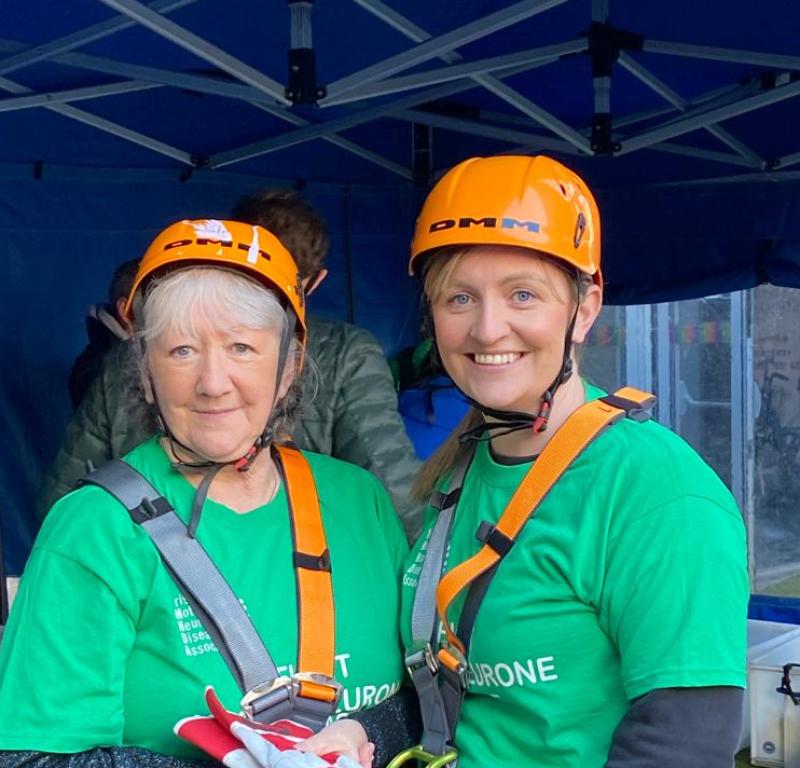 The event took place at the Generator Skyview Tower in Smithfield, Dublin.

Mary says it was a lovely day, and there was a great buzz at the event.

“It was very exciting when you are at the very top. You try not to look down, but then you do look down. I was absolutely delighted I did it. When I had it done, if I was able, I'd have given myself a pat on the back, but I got lots of pats on the back," Mary told the Tipperary Star.

Mary took part in this year's event with her niece Julie Twomey.

Mary's mother died at the age of seventy-three from Motor Neurone Disease.

"I was thrilled I did it from the motor neuron," said Mary.

This is Mary's third abseiling event for the IMNDA, with the first two at Croke Park.

Saturday's event, however, was a little different from previous years.

According to the IMNDA website, Saturday's event was a "never been done before the challenge."

Participants had to climb 244 steps,16 flights to get to the top, where they abseiled down 190ft.

Mary and her family are originally from Cork.

"We didn't know much about Motor Neurone Disease at the time, and so my family down there, especially my sisters, started to do fundraising, smaller things, which were not small at the time like tea mornings, raffles, you know things like that.

Then six years ago, it came up that they were doing an abseil from Croke Park," said Ms Lynch.

The disease attacks nerves in the brain and spinal cord, causing muscle weakness and wasting.

"We are doing this because Motor Neurone Disease- it's such a horrible disease. Its incurable, progressive condition affects your everyday living like walking, talking and even swallowing," said Ms Lynch.

According to IMNDA, around 420 people in Ireland live with MND, with approximately 150 are people diagnosed every year.

Mary says that she and her family raise money for the IMNDA because of their work to support people living with MND and their families.

"It's very important. 80% of their funds are from fundraising and donations, so we just feel it is so important to get involved and get something toward such a great cause," she said.

On the day Mary and Julie met with representatives from the IMNDA.

“We met the girls from the Motor Neurone Association in Dublin and they were very very helpful and very friendly and delighted to see us,” said Mary.

You can donate to Mary's fundraiser on her iDonate page, which will be available until November 30.

REVEALED: how much match 5 Lotto winners won at weekend ahead of tonight's massive lottery jackpot