Antonia is a sixth year student in Cashel Community School 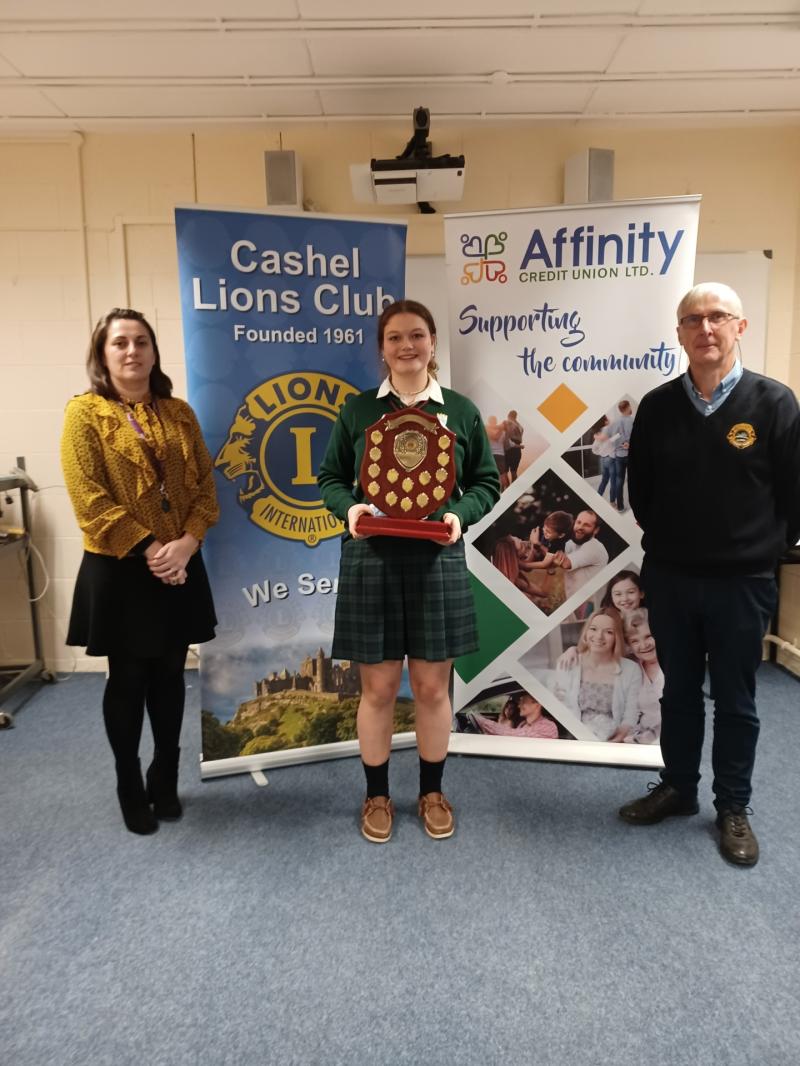 Antonia Kevin, Nodstown, Boherlahan, is the Cashel Lions Club Young Person of the Year. Antonia, a sixth year student in Cashel Community School was selected as a result of an interview process on Wednesday November 10.

Antonia impressed the interviewers with her active involvement and interest in her local community.  In spite of the restrictions of Covid and also the pressure of being a Leaving Certificate student, Antonia manages to make

a positive contribution to her school and her local community in Boherlahan.

She is a member of the Links team in Cashel Community School and she enjoys, ‘helping the first years to make the transition from primary to secondary school’. She is also an active member of the Boherlahan Dualla Camogie Club,

where she is described as a, ‘leader on and off the pitch and as a result is currently the captain of the minor panel’. Antonia is described by her club as being, ‘dedicated, very motivated and a great role model for our younger girls’.

She also plays hockey and is an accomplished classical and musical theatre singer.

Antonia has a keen and active interest in the environment. She takes enormous pride in her ‘local village’ and is always willing to lend a hand with litter picking and keeping her local area tidy. Antonia believes that there is

‘too much unreliable information out there’ on environmental issues and she would love to arrange a guest speaker to come to her school, ‘to speak about what we as a society can do to become more sustainable and more environmentally aware’.

She admires the work of Pieta House and also acknowledges the work of LIFT, a non-profit organisation that promotes positive leadership among young people.

Antonia will represent Cashel Lions Club in the national final of the Lions International Young Ambassador of the 21st Century. Cashel Lions Club is grateful to Affinity Credit Union, Cashel, who sponsored this year’s Young Person of the Year Award.

The club is also deeply indebted to, Paddy O’Leary and Pat Buckley, two local community volunteers, and to Nóirín O’ Dwyer from Affinity Credit Union who voluntarily gave of their time to interview this year’s applicants. Cashel Lions Club

would also like to thank Cashel Community School for hosting the interviews.