Drom hold out to claim third county title in succession 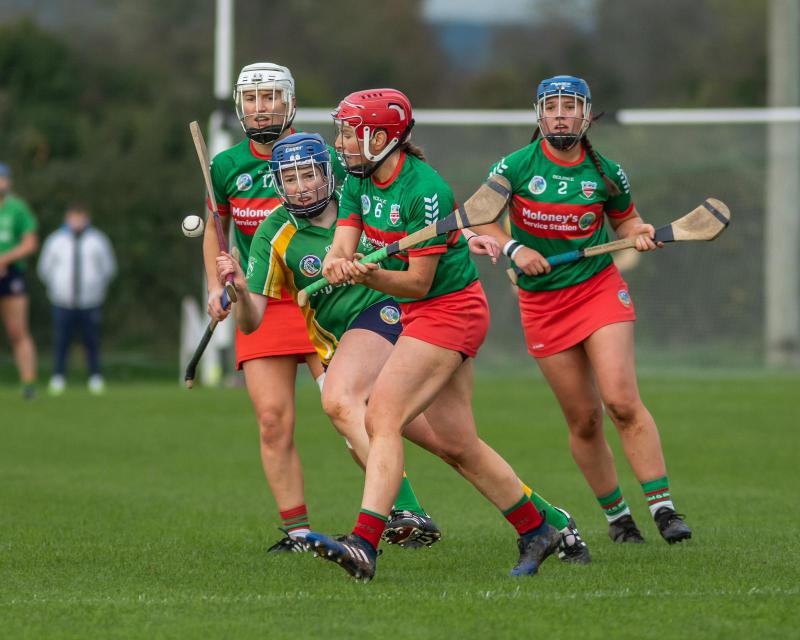 Aoife McGrath gets her strike away under pressure in today's county final.

Drom & Inch made it a magical three-in-a-row as they held off a stern second half comeback from Clonoulty Rossmore to claim this years senior camogie title in front of a packed house in the Ragg early this afternoon.

Clonoulty will be devastated to lose at the hands of their arch rivals Drom yet again at the final hurdle, but they threw everything they had into this game; with the surprise inclusion of Sarah Fryday from the off who flew back from Dubai on Thursday night to line out in the game.

First half goals from Joanne Ryan, Anne Eviston, and Miriam Campion proved to be vital at full time, with the mid outfit having to withstand a huge effort from Clonoulty in the second half, after taking a 3-5 to 1-5 lead in at the break.

Such was the effort of the west team, they managed to hold Drom scoreless for the entire third quarter as the clawed the game back to just two points when the second half water break came, but a flurry of frees after the restart from Eimear McGrath shoved Drom back out into a solid four point lead with two minutes remaining.

There was still time for some late drama though, with Sarah Fryday's hard run down the middle setting up a chance for substitute Kayleigh Davern to goal; but she was dragged to the ground inside the square and this gave Cait Devane a chance to bring it back to one with injury time to come.

But Caoimhe Bourke had other ideas, and despite Devane striking her effort well, Bourke stretched to her right and produced a fantastic save which deflated the Clonoulty efffort, as Drom held out to claim another famous win on their home turf.