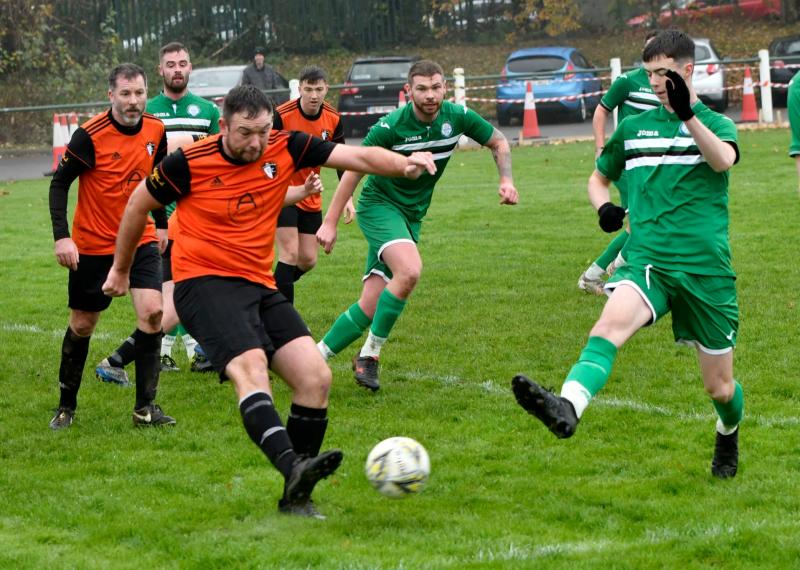 Niall Walsh (Kilsheelan United) gets his shot away as Clonmel Celtic B's Julian Kerton moves in to challenge in Sunday's Division 2 League game played at the By-Pass in Clonmel. Pic: Michael Boland.

Clonmel Town were the only one of the three TSDL teams in the Open Draw of this year’s FAI Cup that had to go on the road, but they made the most of their trip to the midlands when they defeated Westmeath side Mullingar Town on Sunday last.
The home side started brightly playing good football but the Clonmel side were always a threat on the break and Evan McGuire had two great chances in the first quarter of an hour to open the scoring but his efforts were saved.
However, it was only a matter of time before they broke the deadlock and the first goal came in the 20th minute when Conor O’Sullivan played the ball out to Rhys O’Regan, who beat two players and squared it to Alan O’Donnell to finish to the bottom corner.
They had another opportunity to extend their lead two minutes later when Evan McGuire was played in by Jack O’Donnell but his snap shot went over the bar.
Clonmel Town didn’t get it all their own way nevertheless, and the hosts had a few half chances from set pieces before the break but Evan Comerford dealt with everything that came in to the box without too much bother.
The second half started the same as the first, with Mullingar keeping possession at the back without really creating much further up the pitch.
The TSDL side finally got to grips with this tactic and got in again when O’Regan linked up once more with Alan O’Donnell and he made no mistake for a second midway through the half.
After that the visitors were content to hold more of the ball, allowing Mullingar to only really threaten on the break, which they had little enough chances to do, and the Tipperary side played out the rest of the tie in relative comfort.

ST MICHAEL'S 2 ASHBOURNE UNITED 0
FAI Junior Cup favourites St Michael’s wore down stubborn Ashbourne resistance with relentless second half pressure before moving through to the last 32 of this year’s competition in front of a good crowd at a chilly Cooke Park on Sunday.
Saints started brightly but the Meath side were unlucky not to catch them on the hop in the fifth minute when an intercepted ball ended back with Matt Devine who pulled his effort narrowly wide.
Shaken a little by that the home side took a firm grip on the game and were unlucky not to open the scoring themselves when Ed O’Dwyer directed a header onto the cross bar after a Shane Ryan knock down.
Ryan himself and Rhys Byron both had chances to put the TSDL side in front midway through the half, as they began to turn the screw but through stout defending and hesitancy in front of goal the Meath side’s goal remained untouched before the break.
Two minutes into the second period the hosts were again within centimetres of scoring when a right foot shot by Rhys Byron cannoned back off the foot of the post, and this set the tone for the third quarter of the game, with the home side making all the running, but unable to crack the nut that was the Ashbourne goal.
The opener finally came in the 67th minute, when a Meath defender handled a Paul Breen shot and Jimmy Carr made no mistake from the spot, much to the relief of the home crowd.
This took some of the pressure off the home side and also meant their opponents had to become more attack minded, which ultimately opened up more space for the Saints to exploit.
With the light fading the hosts chased the insurance second goal and it came from a familiar source when Shane Ryan did well to retain possession at the edge of the area, found Carr lurking, and the experienced winger fired a right footed effort from 18 yards out to the back of the net.
Cup football is tough and it’s all about reaching the next round, and as always, very few teams will be hoping they’ll get the call to Tipperary town to face an ever improving Saint’s outfit.

Thurles side Peake Villa made it three from three for the Tipperary and Southern District League sides with the most comprehensive of the trio of wins for the TS&DL sides against another Meath side, Trim Celtic, at the Tower Ground in Thurles on Sunday.
Conditions were excellent for this game and the venue was credit to the pitch staff who prepared the grounds for the tie.
Once the football itself kicked off both teams started well and tried to stamp their mark on the game.
If anything it was the visitors who could have opened the scoring, coming close on two occasions in the first fifteen minutes while the Villa seemed to be living in scraps. But that was never going to last and eventually the hosts took over, dominating the middle of the pitch and pressing the visitors back.
This pressure created a chance from a free kick in the 21st minute and as has almost become normal now, Pippy Carroll made no mistake in firing the ball to the net to calm whatever nerves were still being felt.
On top now they hammered home their advantage 12 minutes later when Ronan McGuire was taken down in the box, and Carroll added his and his side’s second from the penalty spot.
This would have been a good return in any game but Carroll wasn’t finished yet, and in the final minute of the half he pretty much put the game beyond the Royals when he completed his hat trick with a great finish to the bottom corner of the net. Shaken by this, the visitors needed a good start to the second period, but their day got worse three minutes in when a back pass to their keeper had too much weight on it, eluding him and finishing up in the back of the net for the unlikeliest of own goals. Their resistance broken now, they offered very little against a very comfortable home side who sat on their lead expending very little energy in coasting through to the next round of the competition. 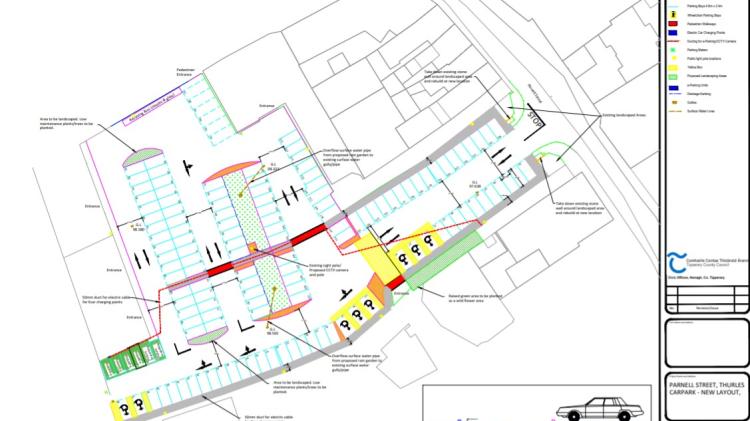 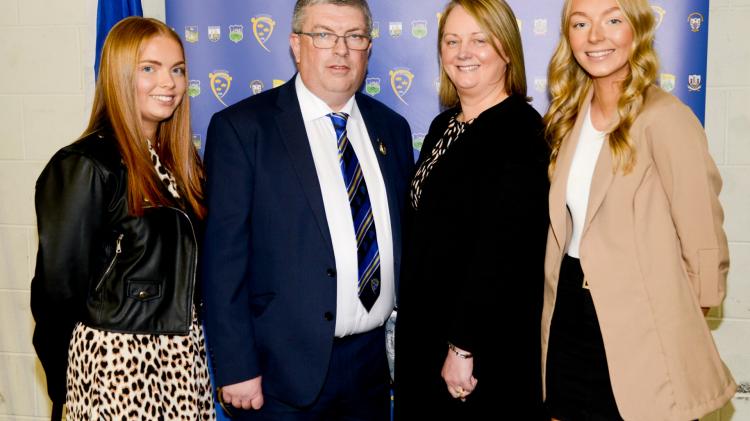 Cistercian College, Roscrea, suffered a 44-31 defeat in the All-Ireland final