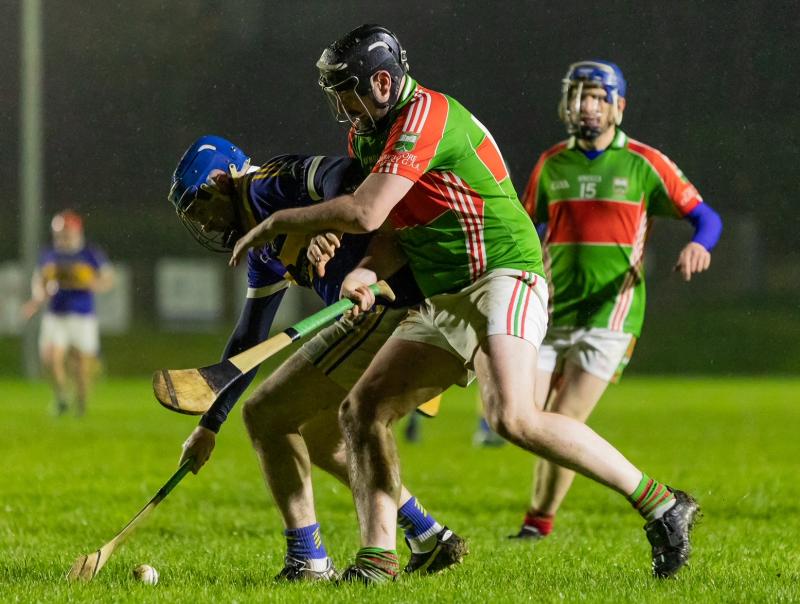 A cold, blustery, and mucky night for the teams on the occasion didn't dampen the spectacle at all, as the teams played the game in a good spirit with some good hurling in patches from the players despite the tough weather.

Kiladangan had the first score of the game within the first 60 seconds with Cathal Hanrahan slotting over a free from close range.

The underfoot conditions were very tricky as there was very little life in the ball when it went to ground, and this made things difficult, but the players slowly got a handle on play; Loughmore corner forward James Connolly channelling his inner Mark O'Leary in the fifth minute to dribble to ball into the net after a good save from Liam Hayes had denied him just prior, but Hayes couldn't prevent the ball from going over the line.

This gave the Loughmore men a lot of confidence after a slow start, as Kiladangan were proving wasteful with some poor wides, as the Mid champions made much better use of their chances, with Cian Hennessy and John Scully launching over points to give them a 1-2 to 0-2 lead at the water break as Cathal Hanrahan finished the play with a 15th minute free.

The remainder of the half was a strong showing from Kiladangan as they started to get on top of proceedings, with points from play by Mark Gleeson from an acute angle, and a wristy effort from Dan Hackett reducing the gap to two points.

Donnacha Hassey got the biggest cheer of the dayto date when he found himself on the opposition 45 and, at the second attempt, fired over a beauty off his right to drive the home supporters mad and put his team just a point in arrears.

Cathal Hanrahan was struggling to find his range from play, but his free taking was very astute as he levelled the game 0-6 to 1-3 at half time.

The second half was a bit more disjointed and scrappy as the rain poured down, but Kiladangan looked like they would bring it home as points from four more Hanrahan frees gave them a three point lead coming up to the end of normal time, but in fairness to Loughmore, the rallied in added time and three John Scully points levelled proceedings as Fergal Horgan blew the whistle to signal full time.

There was some debate as to what way the contest would be finished, with penalties briefly touted by both clubs, but eventually, two periods of five minutes for extra time was decided.

And it wasn't long getting going again, as three minutes in, James Connolly fired a beautiful strike to the bottom corner to send Loughmore into the lead.

But again,   Kiladangan dug deep yet again as scores from Frank Flannery, Dan Hackett and Cathal Hanrahan levelled the game at the end of extra time; and with the hour late it was decided to call it a day.

BEWARE: Horses out on a Tipperary road...AGAIN! Drive with caution

Be advised!
ADVERTISEMENT - CONTINUE READING BELOW