Clonmel family who made a big splash in Tipperary Community Games 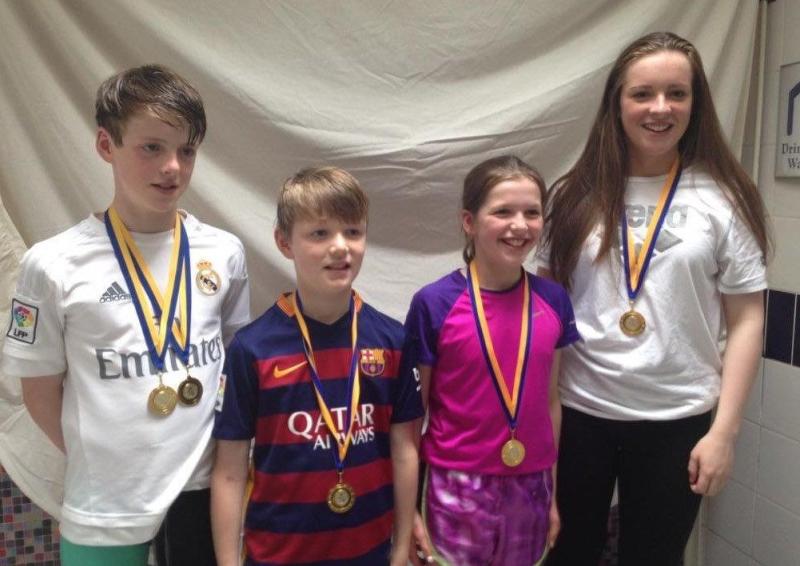 County champions: The four Buckley family members who were all County Tipperary Community Games Swimming champions at one point in time. From left: Michael, Tadhg, Marguerite and Ellen

The Buckley family from Powerstown Lisronagh provided Tipperary Community Games with many exciting performances, bringing honour and glory to their area and county over the years in the swimming events. Ellen first qualified to represent Tipperary in Athlone at U10 in 2009, and all four siblings have never failed to qualify to represent the county on a continuous basis since.
Ellen competed in the finals in Athlone and at the National Aquatic Centre in Abbottstown in backstroke and freestyle events between 2010 and 2017. She qualified for the national finals on a number of occasions and won a pewter medal.
Michael also competed in the finals in Athlone and NAC between 2011 and 2017 in freestyle and backstroke. Unfortunately he missed the 2018 finals in UL through injury. His best finish in finals was fifth.
Marguerite has been a county champion, representing Tipperary at all finals between 2015 and 2021, although the 2020 edition did not take place. She won bronze in the U14 butterfly in 2019 and realised her dream farewell, winning gold in the U16 butterfly in University of Limerick on November 27, 2021. It was a day to remember as Marguerite is now overage.
Tadhg has been county champion, representing Tipperary each year in the finals since 2016 in the backstroke event
All four siblings competed in the national finals in 2016 and 2017.
They have derived huge enjoyment from competing in the Community Games. Marguerite has fond memories of competing in gymnastics, while the boys showed their skill on the rugby and GAA fields. Tadhg performed exceptionally well this year, despite being out of club swimming due to other commitments. We look forward to seeing him action again next year.
Proud parents Denis and Grace also played a big role here, ranging from trips at cockcrow to swimming pools, transport to training and competitions at numerous venues at various hours. They were always ready to assist when Community Games needed officials at events. Grace, in her role as area secretary of Powerstown Lisronagh, along with her committee, provided many children in the area with the opportunity to take part in the sport of their choice. We thank them very much for their commitment to the games and to swimming in particular.
Also, Rose Hurley and Tom O’Ceallaigh are two other wonderful people who did amazing work over the years. The O’Ceallaigh family of Aisling, Lorna, Adam and Matthew also enjoyed considerable success, as indeed did the Hurley twins, Isobel and Megan, at county and national level. The Games are so grateful for the valuable assistance of everybody who rallied around us. We are so pleased that we can still avail of the expertise of Rose Hurley, a member of Swim Ireland to officiate at county and national finals.
We wish to thank all area secretaries, managers, referees, parents, teachers, those that provided venues, the media for all their continuous support and everybody who helped in anyway. Best wishes to all for a very Happy New Year.