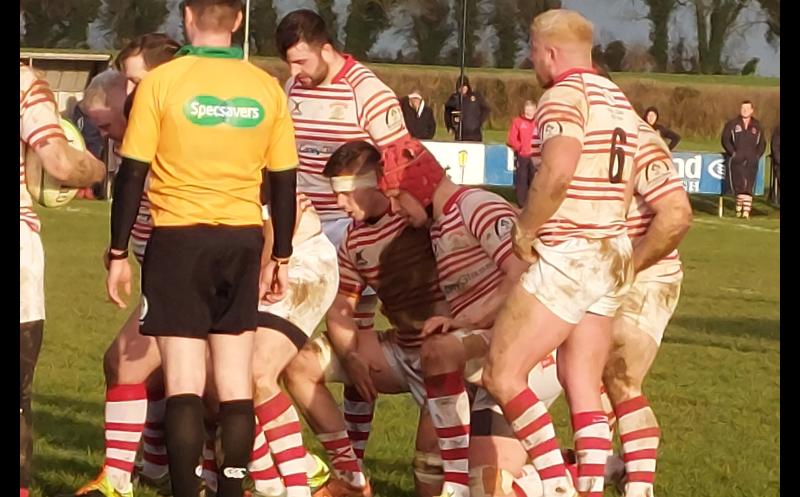 Nenagh Ormond secured a late losing bonus point last Saturday in Rosbrien Limerick, after a tough battle with Old Crescent in Division 2A of the All-Ireland league.

In what was a seriously tight battle dominated by both sides at different times, Crescent were probably that little bit smarter in terms of the territory game, while the Ormond backs looked seriously threatening when in possession. However, the penalty count ultimately was the deciding factor which cost Nenagh in the end.

In the first half Nenagh played against the hill and breeze with  Old Crescent shading the territory but Nenagh disrupted the first four Crescent lineouts and defended well.

Nenagh were far more threatening in attack and forced several line breaks through Conor McMahon and Willie Coffey, who were the biggest threats and ran the ball very well from the centre.

Nenagh were having good phases of possession in the first half and on both visits to the Crescent 22 points were scored through Fionn McGibney penalties, which came either side of an Old Crescent try around the half hour mark.

The try came on 31 minutes and  despite lineout issues, Crescent turned away at least two kickable penalties to go into the corner. When they did secure the ball the maul was repelled but after a number of phases they broke through in the centre to score and convert.

Odds looked favourable for Nenagh at half time with the hill and elements to come but Crescent totally dominated possession for the opening 20 minutes.

Nenagh defended comfortably in the middle third giving little or no line breaks but were far too eager to contest breakdowns when it probably wasn’t needed. It allowed Crescent to pin Nenagh in the 22 on several occasions. Again they turned down kickable chances to go to the corner.

Their lineout was far better in the second half and a  yellow card for Derek Corcoran after a team warning for breakdown offences broke the deadlock. Both Crescent tries came from 22 pressure after penalties, the first of which coming in the 55th minute to put Crescent up 14-6.

On 63 mins Nenagh had their first meaningful possession of the half. A Conor McMahon line break led to phase play in the 22, from which Nenagh forced an overlap, and a well executed crossfield kick was gathered by Peter Coman to score in the corner. A really good conversion from Fionn meant a one point game again.

The momentum was scuppered on the 70th minute when Old Crescent turned down another kickable penalty opportunity to kick to the corner, which led to their third try of the day to re-establish the eight-point cushion at 21-13.

Nenagh’s second try was again as a result of a backline break to gain territory, and again, once in the 22 a period of quick pick and go attack led to a Johnny Hayes try in the 75th minute, which was again converted, with time still left to snatch the win.

And Nenagh certainly  had chances to win. A long range McGibney penalty hit the post and a last play scrum to Crescent 35 out from their posts was disrupted by Nenagh but on a very questionable call Crescent were awarded the resultant penalty.

But it wasn’t to be as the north Tipp side fell to another loss, but at least collected a losing bonus point for their efforts which lifts the off the foot of the table.