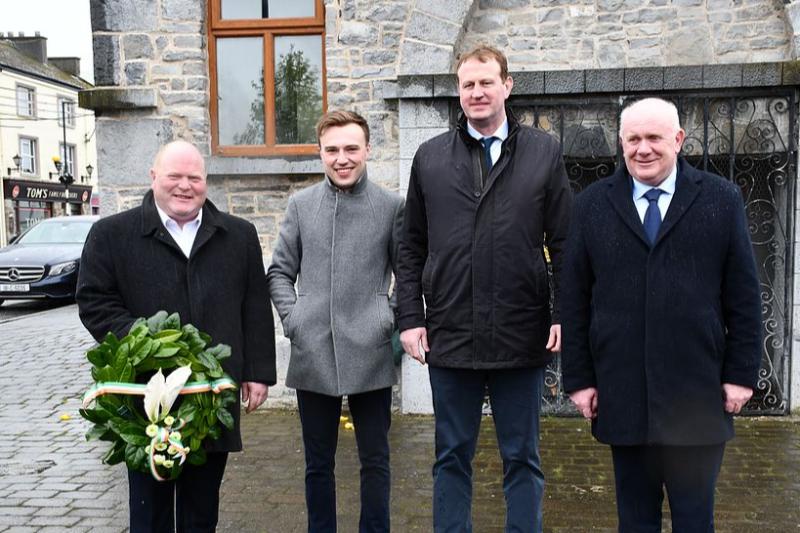 For the last two years, an in-person event was not possible due to the Covid-19 pandemic. Last year, the event was a resounding success as it took place online, with an oration from former Fianna Fáil TD for Tipperary South and senior Government Advisor on the North of Ireland and the Good Friday Agreement, Dr Martin Mansergh.

This year, the commemoration took place for the seventeenth consecutive year, and was back in its location in Templemore Town Square. The Chairperson of Tipperary Ógra Fianna Fáil, Ryan O'Meara acted as MC for the event, which saw the Fianna Fáil TD for Dublin Bay South, Jim O'Callaghan giving this year's oration.

Speaking at this year's event, Ryan O'Meara highlighted the importance of younger generations continuing the tradition of organising commemorations. He said: "Fianna Fáil has a proud Republican tradition and a long history of honouring and remembering our patriot dead. We do this respectfully. We do this accurately. We do this honestly.

"The history of our island is a long and complex one. The 1916 Easter Rising belongs to the people of Ireland and not to any one political party. We gather here today to remember those who fought for our independence and we do this based on an accurate historical record.

"It is not unusual for others to try and rewrite our country's history or claim it as their own. But history is bigger than that. It is more important than that. There is, in my view, both a duty and obligation on us, as young Republicans, to continue this tradition in a manner that is honest, respectful and accurate, and that is exactly what we gather here today to do."

Jim O'Callaghan TD followed in the footsteps of the likes of Dr Martin Mansergh; the current Cathaoirleach of Seanad Éireann, Mark Daly; the former Cathaoirleach of the Seanad, Senator Denis O'Donovan; Deputy Jackie Cahill and others in delivering this year's oration.

Among a number of interesting points made, Deputy O'Callaghan pointed to the strong links between the leaders of the 1916 Easter Rising, such as Eamon DeValera and Countess Markievicz and the foundation of Fianna Fáil. Among other remarkable figures, they founded Fianna Fáil in 1926, with DeValera as its first leader and Markievicz chairing the first meeting of the Party and being the first female Cabinet Minister in Europe.

O'Callaghan said: "The man who founded our great party, Eamon DeValera, was sentenced to death but after his sentence was commuted he ploughed a line that ultimately led to the independence of this country from Britain.

"The fight then for Irish freedom was the same as the fight of the Ukrainian people today, who battle to be free from the dominance and interference of Russia. What is happening in Ukraine today is the same as what happened 100 years ago in Ireland. A large and dominant colonial power as a neighbour that the people wish to exist independently from, and have every right to do so."

Deputy O'Callaghan also spoke of the importance of such commemorations and commented on the large crowd in attendance, honouring the proud Republican tradition that Tipperary is famous for, and highlighting the significance of Soloheadbeg in the Irish fight for freedom.

REVEALED: The most disliked GAA counties