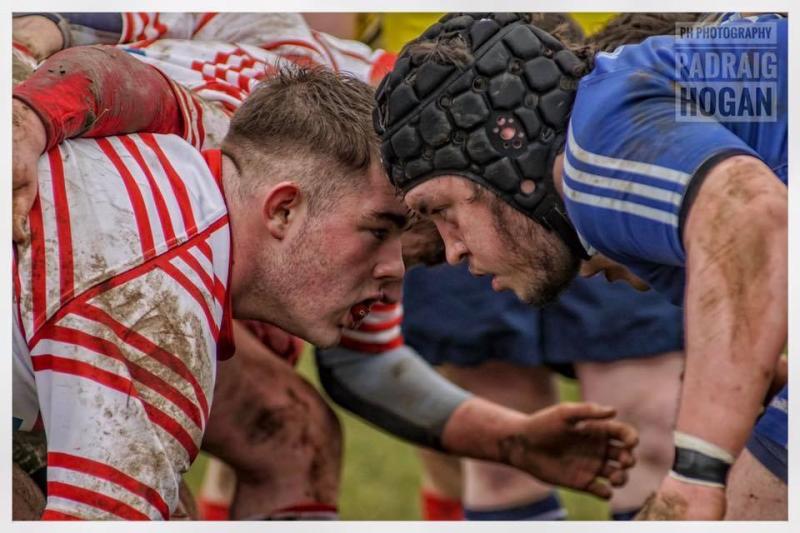 Nenagh Ormond pulled off a very positive result in the first leg of their AIL Division 2A relegation playoff against Rainey Old Boys in Derry last Saturday afternoon.

The game kicked off with Nenagh playing against the elements. The first 20 minutes saw Rainey use the wind to dominate territory. The Nenagh defensive line was resilient however and put the chop tackle to good use in stymying the big, direct ball carrying of the Rainey side. The only scoring opportunity in this quarter was a penalty kick for Rainey which their full back McClean struck well but saw the wind pull it to the left and narrowly wide.

On the restart Nenagh had their first meaningful raid into Rainey territory and under pressure a penalty was conceded by the home side. Fionn McGibney stepped up to have a shot from about 30 metres out but into the teeth of the wind and he too saw his effort drift wide. It was to this point a stalemate with both defences being the dominant feature.

An interesting feature of the previous tie in hat-trick Park between these sides all the way back in November was that it was also finely poised in the early stages before injuries to key Nenagh players Nicky Irwin and Willie Coffey saw the home team seize the initiative. On Saturday both these players were instrumental in Nenagh being the team to grab the tie by the scruff of the neck. From the drop out after McGibney’s miss Rainey kicked long down the middle for McGibney himself to regather. He carried to the halfway line where a quick recycle saw the Rainey defence stretched to the edge with Peter Coman carrying down the touchline.

From the breakdown Derek Corcoran received the ball and prodded a clever grubber through the quickly advancing Rainey press. Irwin was sharpest to react and expertly regathered before turning the defending winger and fullback inside and out to complete a superb individual score under the sticks. With McGibney down to receive attention for a knock, Conor McMahon dispatched the extras to put Nenagh 7-0 to the good on 25 mins.

Again Nenagh showed intent from the restart. It was Coffey this time making the initial dent in the cover, picking sharply from a midfield ruck to attack against the grain and shrugging off at least two would be tacklers to surge in to the Rainey half. From there Nenagh worked the phases to 10 metres from the Rainey line at which point the home team coughed up a penalty under pressure.

Opting for the scrum Nenagh secured a strong platform for John O'Flaherty to pick from the base and feed the marauding Coffey who pounded through the cover to score Nenagh’s second try. McMahon again did the honours from the conversion and at 14-0 up against the wind things looked really good for Nenagh as half time arrived.

As is often the case though, believing that the elements will be enough to see a game through can be a dangerous game. Whether it is fair to think this is what Nenagh anticipated or that Rainey simply upped the ante with their survival on the line the reality is that the second half saw a massive shift in the flow of the game. Interestingly it proved to be the case that both sides fared better playing against the wind and keeping hold of possession.

That word, possession, was largely Nenagh’s biggest issue in the second half. The home side were very much the more efficient at lineout time in particular.

They had a good stream of possession from their own throw and wreaked havoc on Nenagh. Starved of primary possession Nenagh were forced into long periods of defending and despite five star tackling performances from many Nenagh players, none more so than Rob Buckley who put in some particularly key hits, the relentless traffic from Rainey eventually told and they had a try from back row Conor Smyth, converted by McLean on top of a McLean penalty just prior to the try to change the complexion of the scoreboard entirely after 50 minutes.

At 14- 10 the next score was massive in the context of this game. Again Nicky Irwin was to the fore, breaking from a rare, successful Nenagh lineout to enter the Rainey 22. Taking no chances the defending players conceded a penalty to kill the move and needing scoreboard pressure captain John O'Flaherty handed the ball to Conor McMahon who struck superbly to push Nenagh to a 17-10 lead on 65 mins. This game was a real humdinger now and for the next 5 mins or so both sides had possession and attacks but neither team could break the defensive line of the opposition with play largely between the 10 metre lines.

It has to be said that referee Paul Haycock contributed to the contest positively with consistent decision making throughout. However Nenagh were possibly aggrieved with a penalty call against Kian O'Kelly on 70 mins that appeared a fair turnover by the Kilruane man. From here Rainey kicked to 5 metres out to look for their maul to do the rest. Five minutes of sustained pressure broken by several important turnovers from Nenagh through David Gleeson and Patrick Scully saw Nenagh very nearly hold out.

Unfortunately a breakout from Nenagh off a defensive scrum saw the Nenagh attacker isolated and a turnover penalty saw Nenagh back where they started on the 5 metre line defending a maul. John O’Flaherty was penalised and carded for an illegal sack and down to 14 men the dam finally burst and Rainey had a try from Smyth again as their reward.
McClean again added the extras. Both he and Conor McMahon deserve rich plaudits for their kicking in testing conditions with only one miss from either side.

Both teams fired the kitchen sink at the last 5 minutes in search of a winning score to take the advantage into next week but ultimately, as was the case through much of this one, the defences held firm. 17 all was probably a fair reflection of the game on the day. There were excellent performances on both sides. For Nenagh Rob Buckley stood out in defence, Jonathan Hayes had a big impact for his time on the park.

In attack Irwin and Coffey were involved in everything good from Nenagh. Much of this game was fought in the trenches, involving the unglamorous work of mauling and defending and the impact of guys like Jake O Kelly, Kevin O Gorman and John O’Flaherty in this aspect was notable. On the Rainey side Con Smyth was a standout player in terms of carrying strength. McCauley at 7 was a thorn in the Nenagh side at lineout time while in attack out half Connolly and outside centre Brown were prominent. This leaves an intriguing tussle ahead next Saturday in the return leg.