Stars of Tipperary sport given due public recognition

The richly deserved public recognition of the finest sports stars in the county resumed on Saturday night after the enforced Covid break as the Annerville Awards were presented at a ceremony hosted by the United Sports Panel at the Talbot Hotel in Clonmel.
Glowing tributes were paid to the award winners for their incredible achievements and the determination, dedication and sacrifice they all displayed as they reached the highest standards in their chosen sports.
Muiris Walsh, Chairman of the United Sports Panel, said that after an absence of over two years it was wonderful to be able once again to honour the amateur sportswomen and sportsmen from the Premier County.
“As the world tries to return to some sense of normality and is trying to live in a world that has changed dramatically since we were last here in January 2020, it is with a huge sense of both joy and relief that I welcome you all here to The Talbot Hotel, Clonmel. Once again life has reminded us of the importance of sport in our lives. There is no doubt that sport offers all of us a chance to breathe and feel normal. It is life’s most necessary triviality,” said the chairman of the United Sports Panel.
He told the award winners, their families and friends who gathered for the award ceremony at the Talbot Hotel that since the awards were started 60 years ago, 42 sports had been honoured.
“Great credit is due to the committee that no sport is deemed a minority sport. From athletics to sailing, every sport is accorded the same respect and the criteria for choosing the stars hasn’t changed since the awards were founded back in 1959. There is no doubt that these awards remain the most prestigious of their type in the country,” he said.
Muiris Walsh said he was honoured to be the United Sports Panel’s 20th chairman and he paid tribute to all members past and present who have served on this panel, and who make the final decisions with great care and diligence.
He told the audience of the special occasion held in Croke Park to honour the Tipperary football team that played on Bloody Sunday.
“A few weeks ago the panel was very honoured to present a special Knocknagow award for 2020 to the GAA to posthumously honour the Tipperary football team that played on Bloody Sunday over 100 years ago on November 21 1920. The United Sports Panel will help perpetuate the memory of the Tipperary football team that was caught up in the worst atrocity of the War of Independence. How fitting that our senior footballers captured a first Munster senior title since 1935 in 2020,” he said.
On Saturday night for the first time since the Annerville awards were founded since 1959 the prestigious Knocknagow award was presented to a woman, a camogie star who played All-Ireland finals for her native Tipperary and Kilkenny.
An emotional Ann Carroll proudly stepped up to accept the award.
“For the first time, the Knocknagow award has been awarded to a woman, Ann Carroll. When you read the list of achievements and the honours that Anne has won, she stands proudly alongside any of our previous recipients,” said the United Sports Panel chairman.
The chairman thanked Bulmers who had sponsored the awards since 1964.
“We are grateful for that continued support from a company that is so integral and part of the success and longevity of these awards. We are also grateful to our friends in the media, in particular The Nationalist who do so much to publicise the awards. Thanks also to photographer John D Kelly and Ed Donnelly, who do great work for us every year,” he said.
The chairman thanked the management and staff of The Talbot Hotel for their support and he thanked his fellow United Sports Panel officers Seamus King, Eamon Wynne and Ken Conway for the hard work they put in to organise the awards.
“Finally, I want to congratulate every award winner this evening. Also to their families who have helped, encouraged and made the sacrifices necessary for your loved ones to succeed and compete. You are the engine of your loved one’s ambitions.
“Everyone of you is the reason why these awards have been in existence for over 60 years. I’m not a foolish romantic when I say that sport is not all about the winning, it’s about the glory. However, in the midst of all the romance, there must be sweat, grit and hours of dedicated training. However you, our sports stars, don't need me to remind you that when you apply yourselves with heart and honesty, along with your authentic talent, you will win plenty along the way. I can guarantee you that this United Sports Panel will be there to honour those achievements,” said Muiris Walsh. 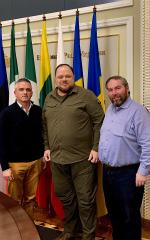