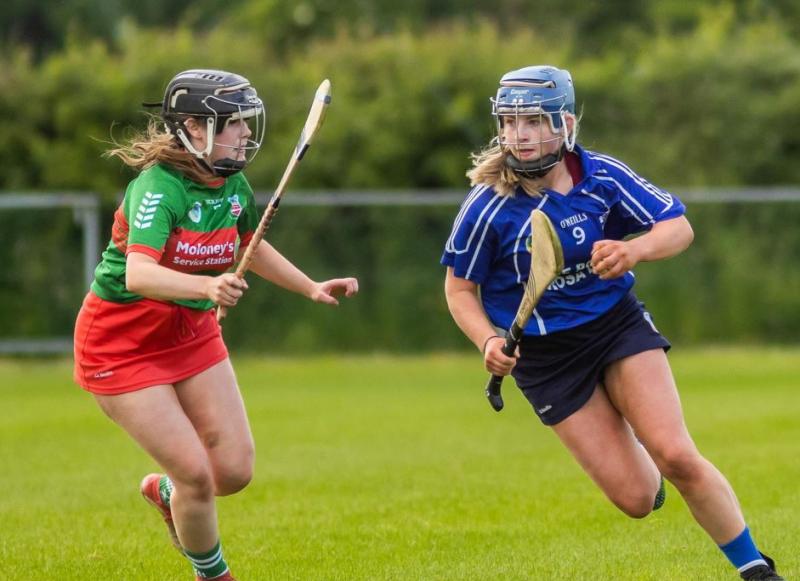 Drom-Inch were crowned senior league champions on Sunday evening after another nail biting encounter which needed 20 minutes of extra time to eventually separate the teams.

Like the drawn game seven days previous the two sides were once again very evenly matched and supporters were treated to a thrilling contest which ebbed and flowed.

Annacarty deservedly led by two points at half time 0-6 to 0-4 as the scores came that little bit easier.

They continued to lead midway through the second half 0-8 to 0-6 before Drom struck for 1-2 without reply to suddenly go a goal up and really spring the game into life.

Patricia McGrath finished to the back of the net after a great move started in midfield, while Miriam Campion who had a great battle throughout the hour with Shauna Heffernan pointed to swing the momentum in Drom-Inch’s favour.

Annacarty didn’t panic and with Jean Kelly now on the pitch as a second half substitute they were still full of running.
In the 52nd minute the impressive Niamh Ryan goaled to extend Drom-Inch’s lead to 5 points 2-8 to 0-9.

There was more drama minutes later when Drom were reduced to 14 players after Aine Greed received a second yellow card with her side ahead 2-8 to 10.

A point from Eibhlis McDonald her second of the hour made it a one point game before Siobhan O’Neill managed to bundle the ball over the line after a goalmouth ruck had emerged – 2-8 to 1-11 and we were heading to extra time.

Drom-Inch started the brighter in extra time with Antoinette Kennedy and Niamh Ryan (free) both pointing. Eibhlis McDonald scored her 3rd point of the day before Joanne Ryan and Siobhan O’Neill (free) exchanged scores to leave Drom-Inch three points up at the break 2-11 to 1-13.

Tired bodies and tired minds in the second half meant neither side could capitalise on possession with no score for 10 minutes meaning Drom-Inch ran out 1 point winners after a tough and exciting battle.

Annacarty were brilliant over the two games and really took the game to Drom-Inch on both occasions and brought out the best in the county champions.

They will rue missed chances in the second period of extra time with a few opportunities from placed balls going narrowly wide. The steely full backline for Drom-Inch of Maria Connolly, Christina Brennan and Maurean Ryan made life very difficult for the Annacarty attack.

Miriam Campion and Niamh Ryan were a constant threat up front while Caroline Shanahan and Katie O’Dwyer brought real energy and aggression into the middle of the field.

For Annacarty Orla O’Brien, Cinnait Walsh and Eilish McDonald were very good throughout while Jean Kelly made a big impact when introduced.