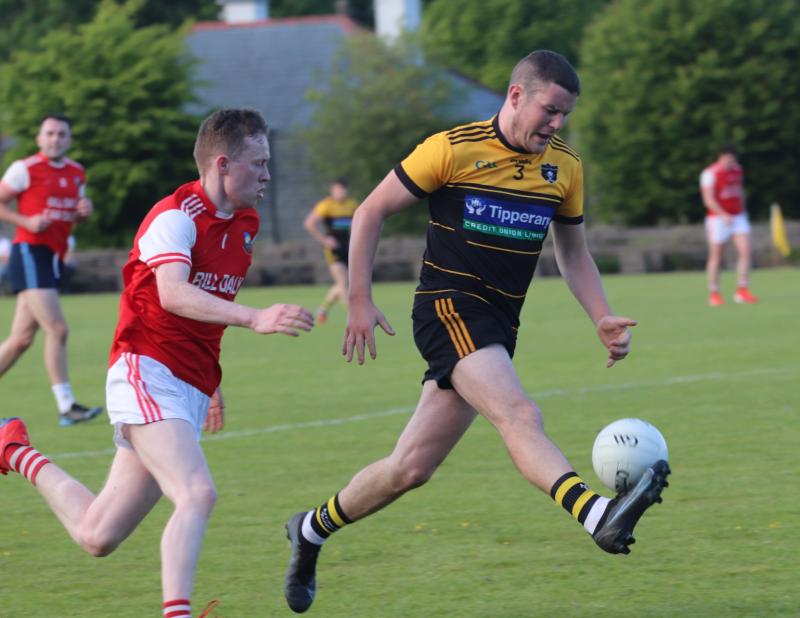 When Brian Roche, just on the field goaled twelve minutes into the second half, Arravale Rovers looked set for a comfortable victory but amazingly would fail to score for the remainder of the game as Galtee Rovers brought the contest to a one score game in the closing stages. Ultimately though Arravale defended well and held out as Galtee Rovers sought a second goal to try and force extra-time.

Arravale Rovers were quickest off the mark and their speed of movement and fitness saw them with three points on the board from four efforts after two and half minutes of play. Donagh Leahy, Micheal Lowry and Cormac Maher all kicking from play. It was the fifth minute before Galtee Rovers got off the mark through a Stephen O’Dwyer placed ball.

Eoin Doocey and Micheal Lowry added further points in between a Shane Egan point for Galtee Rovers. At this stage Arravale looked far more in control and their running was causing problems for Galtee Rovers. Indeed there were goal chances possibly on but they took the safer option of the points.

Their half forward line of Eoin Doocey, Donagh Leahy and Micheal Lowry were getting on a lot of ball with support from their midfield pairing of Donagh Hickey and Matthew Moroney while wing backs Cian Ryan and Johnny Ryan were constantly going forward.

Arravale though kicked a number of wides as the half progressed while they also played the final three quarter’s of the game with fourteen men following the dismissal of Raymond Kelly.

When Stephen O’Dwyer cut the gap with five to go to the break it looked like Galtee Rovers were well in the contest but Arravale got their game moving to outscore their opponents 0-4 to 0-1 in the closing minutes. Cormac Maher, Donagh Leahy, Eoin Doocey and Donagh Hickey all got in for points to see them lead 0-9 to 0-4 at half time.

The scores were at a premium upon the resumption and it was the tenth minute when Cormac Maher added his third point of the game this time for a placed ball. Three minutes later and the game looked wrapped up when Brian Roche just on the field came up from corner back for the games first goal.

Amazingly Arravale would fail to score for the remainder of the game. Galtee Rovers came far more into the game with Sean Daly, Darren McGrath, Tony and Shane Egan to the fore. Tony Egan kicking two points before finding the back of the Arravale net.

The goal coming with five to play from a quick free from Tony to Shane and back to Tony with a well worked finish. Three minutes later and the game was in the melting pot when Darren McGrath point to leave just three between the sides.

Galtee Rovers pressed for a goal but just failed to breach the Arravale defence for a second time. Sean Daly going closest finding the side netting while Darren Heuston saved well while an advantage was being played for Galtee Rovers.