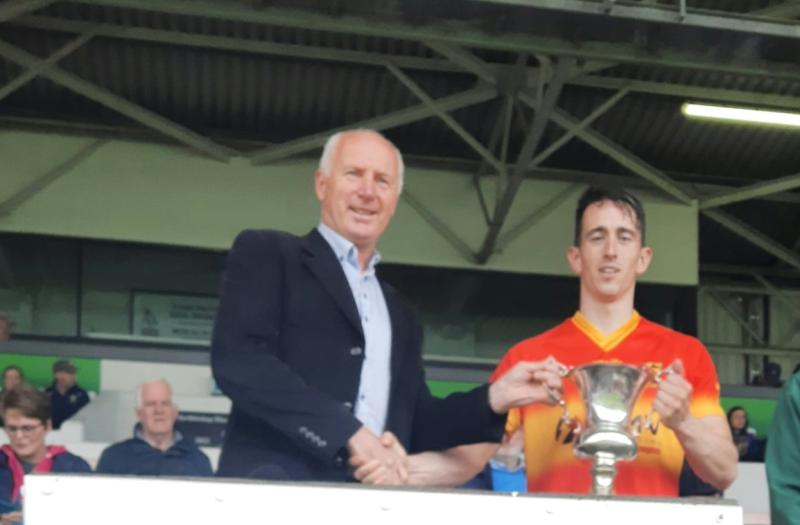 Moycarkey Borris claimed the FBD Insurance Division 2 County Hurling League title and the Jim Devitt Cup as a result of their extra-time, two-point victory over Eire Óg Annacarty Donohill in the opening game at FBD Semple Stadium on Saturday evening.
This game, although it wasn’t up to the intensity of a championship game, was hard fought throughout, with never much between the sides, save for a few minutes after half-time when Moycarkey moved into a six- point lead following their second goal.
This lead was short-lived, as Eire Óg hit back with four unanswered points during a ten-minute spell. In a game that ebbed and flowed, both sides had their moments of superiority.
The sides were level at 1-9 each as half-time approached, but a late surge from the mid men gave them a three-point advantage at the break.
Two minutes into the second half Moycarkey doubled their advantage, but were unable to shake off the west men, who hit the next four points.
Eire Óg introduced Aidan Griffin with ten minutes remaining and he almost singled-handedly dragged them back into the contest, hitting five points during that period, including two injury- time points that brought the game to extra time.
Moycarkey reintroduced Kyle Shelly for extra-time, having replaced him during normal time. This move paid dividends, as Shelly contributed five points after being reintroduced. This game certainly went to the wire, as Rhys Shelly saved at the death from Tom Fox at the expense of a 65, to save the day for Moycarkey.
Eire Og started the livelier, hitting two points from Paul Devlin and Dinny Crosse inside the opening 40 seconds. Kieran Morris pulled one back for Moycarkey from a placed ball before Paudie Bradshaw first- timed to the net from a Kevin Fox delivery. Morris hit two more at the Killinan End before Seanie Ryan put three between the sides after nine minutes.
Moycarkey bounced back and hit the next six scores in an eight-minute spell, one goal and five points without reply, to go five up. Niall Heffernan scored 1-1, Kevin Hayes 0-1 and Kieran Morris 0-3, including two frees.
Eire Óg replied with points from Kevin Fox (2), Paudie Bradshaw (1) and a brace from Seanie Ryan to bring the game level for the first time after 26 minutes.
Once again Moycarkey came back and outscored their opponents by 0-4 to 0-1 before half-time to take a three-point advantage.
The second half was barley two minutes old when Max Hackett put Kevin O’Regan through and the midfielder made no mistake, netting goal number two, to put his side six to the good.
Not for the first time, Eire Óg came back strongly and points from Seanie Ryan (2 frees), Darragh Mooney (free) and Paudie Bradshaw from open play cut the deficit to two by the three-quarter mark. Jack Fallon and Darren Flood hit two for Moycarkey, either side of a Seanie Ryan free, to put three between the sides with ten minutes of normal time remaining.
Eire Óg introduced Aidan Griffin and in the final ten minutes he contributed five points, including the two converted frees in injury time to bring the game to extra-time.
For the extra-time Moycarkey reintroduced Kyle Shelly, who had been substituted in normal time, and the corner forward hit four points from open play during the first period and followed up with another during the second period.
Moycarkey led by two at half-time in extra-time and went on to take a three-point advantage into injury time.
It took a brilliant save by Rhys Shelly, at the expense of a 65, from Tom Fox to prevent this game going to penalties. Conor O’Brien had the last say when his overhit 65 brought them within two points, as time ran out.