Goals in either half do the trick for Clonmel team 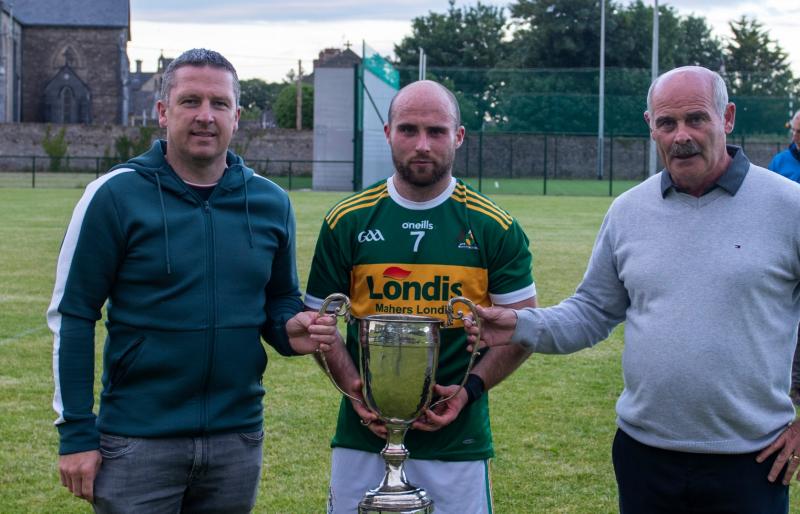 Goals in either half proved crucial for holders Clonmel Commercials when they retained their Clonmel Oil south senior football championship title with this six-points victory over Moyle Rovers at Cahir on Wednesday evening.
The first goal, scored by man of the match Sean O'Connor, and which arrived in additional time at the end of the first half, gave Commercials a half-time lead of seven points (1-8 to 0-4), a cushion that proved sufficient to hold Rovers' second half fightback at arm's length.
The second, supplied by substitute Michael Quinlivan 12 minutes from the end, came in the nick of time to avoid the possibility of an uncomfortable closing phase to the game for his team, after Rovers had reduced their lead to just three points.
With seven points separating the sides at the break, it appeared that Commercials were on course for a stress-free run to another senior divisional crown in what was a repeat of last year's final.
Their lead may never have been seriously threatened in the second half but Rovers did succeed in making a game of it, outscoring Commercials by 0-6 to 0-2 in the third quarter.
The Powerstown Lisronagh team flew out of the traps at the start of the second period with points from Luke Delahunty and Liam Boland's free inside the first two minutes.
Commercials responded with a Sean O'Connor point in the 35th minute, but Rovers were very much in the ascendancy at this stage and Liam Boland, who was really starting to make his presence felt, added two further points.
A Cian Smith point kept the scoreboard ticking over for Commercials. At the other end, as their most productive spell of the game continued, Rovers were denied a goal when Jack Harney accepted a pass from Ben Owens and set off on a great run that ended with a shot that was destined for the top corner being pushed over the bar by Commercials goalie Michael O'Reilly.
Liam Boland made it 1-10 to 0-10 with Rovers' first score from a placed ball with 15 minutes remaining. However that was as good as it got for them, as Commercials soon regained their composure.
Commercials may have found scores hard to come by until that stage of the second half, with their tally of wides continuing to mount, but they breached the Rovers defence for the all-important second goal in the 48th minute. That was when Michael Quinlivan broke through two challenges before rolling a low shot to the net to all but decide the destination of the cup with his clinical finish.
If Rovers' prospects of rescuing the game in the final ten minutes appeared remote, they receded even further seven minutes from the finish, when Aidan Foley was black-carded after he hauled Jason Lonergan to the ground as the fleet-footed Commercials player made a beeline for the goal.
Sean O'Connor tapped over the resulting free before Lonergan himself got in on the scoring act with his third point from play to put Commercials eight clear with four minutes of normal time remaining.
Rovers had the final say with two late scores from Liam Boland, the first from a mark followed by a converted free. However, at the final whistle there was no doubt that the better team had won.

Commercials, who were denied a three in-a-row by Loughmore Castleiney in last year's county final, will be there or thereabouts again in this year's county championship, which gets underway towards the end of next month.
They raised their game when it was needed, none more so than when Michael Quinlivan made his all-important intervention 13 minutes after he replaced the injured Cathal Deely. They were at their best in the first half but there wasn't always an end product to their slick, swift passing. They had a total of ten wides, six in the first half, which will be a concern for manager Robbie O'Dwyer and his backroom team.
Nevertheless the performances of Kevin Fahey, Jack Kennedy, Sean O'Connor, Seamus Kennedy, Jason Lonergan, Padraic Looram and Conal Kennedy, among others, will have offered them ample encouragement that they are on the right road.
Moyle Rovers too have a solid foundation on which to build for the county campaign, thanks to players such as Jack Harney, Liam Boland, Brian McKeown, Ben Owens, Luke Delahunty, Stephen Quirke and Diarmuid Foley.
As they made a bright start to the game on what was an ideal evening for football, Cathal McKeown and Diarmuid Foley gave them an early lead before Jason Lonergan and Sean O'Connor levelled the scores. Jack Kennedy's free from the ground edged Commercials ahead for the first time in the tenth minute, with Diarmuid Foley equalising a couple of minutes later.
As Commercials began to take a firm grip on the game, Cian Smith curled over a neat point before a sequence of five points without reply was completed by Jason Lonergan, Jack Kennedy and Sean O'Connor (from a free and play).
Dara Ryan had Moyle Rovers' first score in 17 minutes but they suffered a major setback on the stroke of half-time, when Jack Kennedy picked out Sean O'Connor with a peach of a pass. The full-forward sidestepped Jack Harney before steering a low shot past Rovers goalie Ciaran Kenrick for the opening goal.
Rovers thought they had earned a mark moments earlier but referee Derek O'Mahoney overturned the decision and awarded a free to Commercials. When Rovers protested, the free was moved forward and Commercials successfully recycled the ball until O'Connor provided the coup de grace to the move with his deadly finish.
Clonmel Commercials: Michael O'Reilly, Enda Dunphy, Ciaran Cannon, Donal Lynch, Padraic Looram, Kevin Fahey, Jamie Peters, Seamus Kennedy, Conal Kennedy, Jack Kennedy (0-2, 1 free), Jason Lonergan (0-3), Aldo Matassa, Cathal Deely, Cian Smith (0-2), Sean O'Connor (1-5, 0-2 frees).
Substitutes: Michael Quinlivan (1-0) for Cathal Deely (35 minutes), Declan Nee for Cian Smith (52 minutes), Liam Ryan for Padraic Looram (58 minutes).
Moyle Rovers: Ciaran Kenrick, Aidan Foley, Jack Harney (0-1), Cillian Crowe, Cathal McKeown (0-1), Morgan Irwin, Brian McKeown, Ben Owens, Stephen Quirke, Aidan McGrath, Liam Boland (0-6, 2 frees, 1 mark), Dara Ryan (0-1), Luke Delahunty (0-1), Shane Foley, Diarmuid Foley (0-2).
Substitutes: Rory Collins for Aidan McGrath (22 minutes), Sean Cotter for Cillian Crowe (51 minutes), Anthony Phelan for Diarmuid Foley (51 minutes).
Referee: Derek O'Mahoney (Ardfinnan).