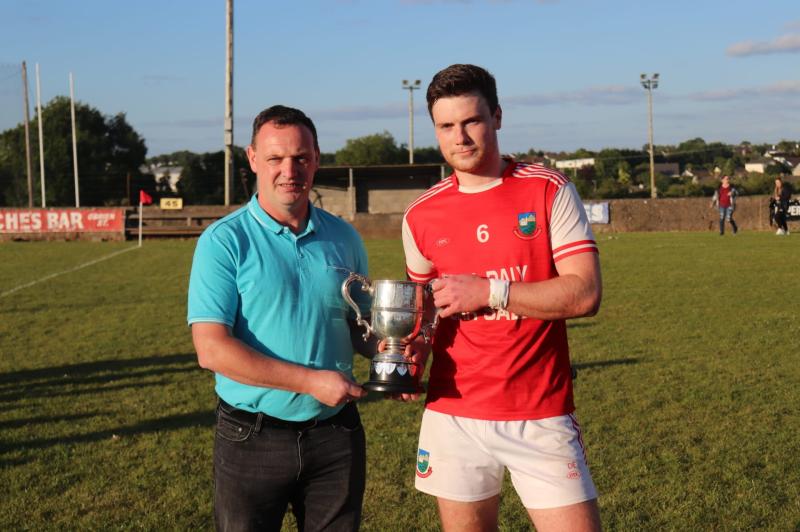 Ferghail McDonnell, vice-chairman of the county football committee, presents the Tipperaryman’s Cup to Galtee Rovers captain Daire Egan after they beat Golden Kilfeacle in the final

This was a game that either side could have won and Golden, in particular, will rue their wayward shooting in front of goal, both from open play and placed balls.
On two occasions in the closing minutes, as they chased an equaliser, they had two shots that came back off the upright.
This game ebbed and flowed, with both teams having periods of supremacy, firstly Galtee who raced into a 1-3 to no score lead by the seventh minute.
Golden then scored 1-3 without reply to draw level after 22 minutes. Galtee led by the minimum at the half- time break.
The second half played out much the same, with Galtee again kicking three points without reply in the third quarter.
Golden replied with three converted frees to cut the deficit to the minimum with ten minutes remaining.
However, this was as close as Golden would get, as both teams kicked a point each in the closing stages.
Golden had the last attack in search of an equaliser that would have brought the game to extra-time, but the shot drifted to the right and wide, much to the relief of the Bansha men.

Galtee got on the scoreboard in the opening minute when Tony Egan converted a free at the dressing room end. Eamon Quirke followed up a minute later to double their advantage.
With five minutes on the clock full forward, Jim Quirke, fielded a high ball before blasting to the Golden net to put them five in front.
This was followed up with an Eric Grogan long-range score in the seventh minute.
Golden settled and Seanie O’Halloran goaled at the far end following a sweeping move out of defence.
They took the game to the Bansha men and Ronan Hayes kicked a point from play before two converted frees by Seanie O’Halloran tied the game at 1-3 each with six minutes remaining before the break.
Shane Power had the final say on the scoreboard when he kicked over the bar from close range just before the interval, leaving Galtee in front by the minimum, 1-4 to 1-3.
As in the opening half, Galtee were quickly out of the blocks at the beginning of the second half and a point by Eamon Quirke from open play and two converted frees from Tony Egan put them into a commanding four-point lead by the three-quarter hour mark.
Golden were not about to surrender, however, and three converted frees by Seanie O’Halloran between the 18th and 21st minutes cut the deficit to the minimum.
However, this was as close as they would get, as Eamon Quirke kicked his third point from open play to put two between the sides with six minutes remaining.
Golden continued to attack but their only reward was a converted free from Seanie O’Halloran, his sixth of the evening, with two minutes remaining. Two minutes into injury time a last attack from Golden trailed off to the right and with it went any chance of an equaliser.
Scorers: Galtee Rovers: Tony Egan (0-3 frees), Eamon Quirke (0-3), Jim Quirke (1-0), Eric Grogan (0-1), Shane Power (0-1).
Golden Kilfeacle: Seanie O’Halloran (1-6, 0-6 frees), Ronan Hayes (0-1).
Galtee Rovers: Denis Peters, Peter Carroll, Conor O’Sullivan, Eoghan Brennan, Stephen Moloney, Daire Egan, Shane Power, Eric Grogan, Sean Daly, Eamon Quirke, Shane Egan, Cian O’Dwyer, Tony O’Brien, Jim Quirke, Tony Egan.
Sub: Eoin Halpin for Cian O’Dwyer (38 minutes).
Golden Kilfeacle: Jack Currivan, David Wade, Johnny Wade, Daithi Bargary, Eoghan Ryan, Eoin Marnane, Sean Hayes, Shane O’Connell, Ronan Hayes, Ben Currivan, Seanie O’Halloran, Niall Heffernan, John Colohan, Keith Landy, Shane Stapleton.
Subs: Tom Byrnes for Keith Landy (45 minutes), David Sinclair for John Colohan (45 minutes).
Referee: David Grogan (Aherlow).