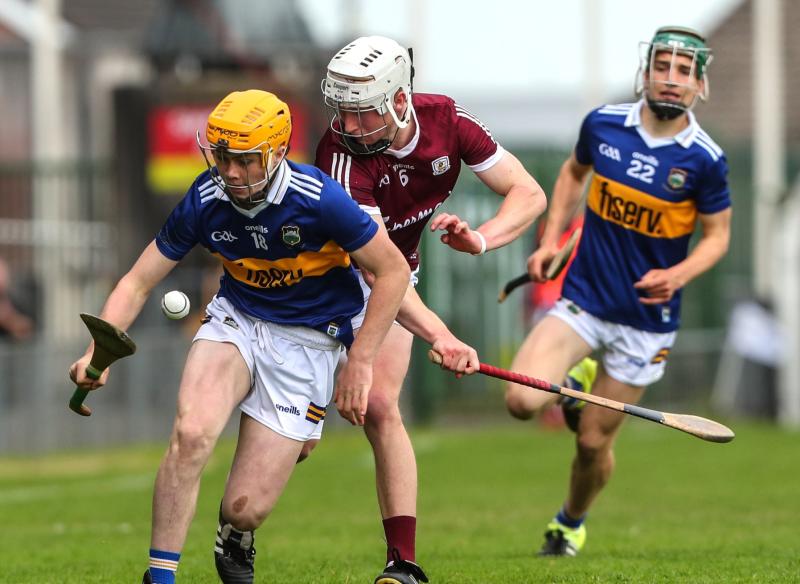 Given the depressed state of our senior hurling this year the performances of the minors have been like beacons in the night. When all else is dark and dreary they’ve set the scene alight with some stunning displays that have now brought them to an All-Ireland decider on Sunday week at Nowlan Park against Offaly.
Irrespective of the outcome in the decider they’ve been our saviours this year. The Munster final was spectacular, with its extra time and penalties, but they delivered more drama on Sunday last with a late, late flourish to see off a very strong Galway outfit. They certainly don’t do things the easy way.
This was a pendulum game swinging this way and that, testing the frayed nerves of the fans, before finally settling on Tipp’s side.
In successive games now these teenagers have shown amazing character to hit back when all looked lost. You might expect such resilience from seasoned seniors but coming from teenagers this was amazing.
Rory Burke’s lead point for Galway in injury time looked like a winner. We’d surrendered a five-point lead to a devastating burst from the Tribesmen, spearheaded by Aaron Niland’s goal.
The force was with Galway, but somehow these lads found the reserves to come again. An Adam Daly point tied it up before Joe Egan hit the lead score. And then came the cherry on the top with a clinching goal, match hero Tom Delaney setting up Senan Butler for an ice-cool finish.
It was a spectacular ending to a gripping game. The quality of the skill and score-getting was outstanding at times. The early exchanges were even but, ominously, Galway’s twin strike force in attack of Niland and Burke was threatening to derail our hopes. Our defence was under strain and eventually the Tribesmen profited with two rapid-fire goals, Niland and Dolphin the finishers.
It might have drifted away from us at that juncture but the defence reset, the workrate increased outfield and Tipp were rewarded with an Adam Daly goal, tapped home after initial saves by Galway goalie Fahy, who was outstanding all day.
We went in a point adrift, which was healthier than we feared just ten minutes earlier. Clearly there was considerable firepower in both attacks so getting the supply lines working from outfield was going to be crucial to the eventual outcome.
The third quarter saw Tipperary up their game considerably. The defence tightened, helped by outfield workrate, and our forwards began to make hay.
Tom Delaney was really making his mark now, Paddy McCormack hitting some great scores too and when all this was reinforced by the third goal, batted in by Joe Egan after the initial save, Tipp led by five heading into the home stretch.
Then came something of a wobble - or perhaps it was merely that a team of Galway’s calibre wasn’t going to remain subdued for a prolonged spell. A lack of composure perhaps set in, with a few poor decisions and a few fumbles and wides handing the initiative back to Galway.
The lead dwindled, Niland’s goal inside Eoin Horgan’s left post was a huge lodgement. The lead point seemed to endorse the game’s tilt and Tipperary looked in trouble. What followed was remarkable, as Tipp dominated the closing minutes of injury time to record a dramatic win.
The entire unit, players and management, take huge credit for such a heartwarming display. It was both brave and brilliant from players of such a young age.
The spread of Tipperary scorers underlined the overall quality of the performance. We had ten scorers in total against five for Galway, for whom Aaron Niland hit an amazing 2-11, 2-4 from play. All the starting forwards for Tipperary got on the scorecard as well as the midfield pair, Ciaran Foley and Adam Daly, and centre back Tadhg Sheehan. The substitutes have made telling impacts in previous games and again on this occasion Kilsheelan Kilcash’s Senan Butler came on late and showed great nerve to slot home the clincher.
The geographical spread of clubs represented on the team has been much remarked upon. Interestingly it has also been pointed out that on the starting team only two Dan Breen clubs were represented. At one level that’s very welcome and reflects favourably on the management’s expansive search for talent.
However, there is a downside and a challenge. Upcoming talents in junior clubs sometimes don’t get the opportunity to develop by playing top grade club hurling and, as a consequence, can stagnate. The work of the county development squads is crucial to counteracting that problem. Anyway, these lads have helped restore some faith and we applaud them for their efforts.

The All-Ireland quarter-finals at the Stadium on Saturday were disappointing. Perhaps it was the near proximity to the Munster final that drew unfair comparison but apart from the exciting finishes there wasn’t a lot to cheer.
It’s now official, Cork’s famine has matched that endured by Tipperary back in the seventies and eighties. Seventeen fruitless seasons since their last hold on Liam McCarthy and no great optimism that the sequence is about to end any time soon.
The Rebels in recent years offer the odd green shoot of optimism but just as often it wilts like a tender bud hit by a May frost. There’s neither the consistency nor cohesion in their game to string together any pattern of progress.
Look at their record this year. They beat Tipperary, the worst performing team in Munster, and Waterford, the second worst. Then there was Antrim, which you can discount, and that’s the sum total of their summer endeavours. Otherwise, when questions were asked, they flunked the test.
What’s worse is that Galway didn’t exactly present an honours paper for examination. You sensed that the Tribesmen were still hurting from the Leinster final and tripped over the line here simply by being slightly less inept than Cork.
If ever a team self-destructed it was Cork on Saturday. The early blunder by Patrick Collins for the opening Galway goal was an omen. Then they missed clear goal chances themselves, their radar went on the blink so the decision to leave Pat Horgan on the bench backfired.
Some on-field decisions went against them too, such as Daithi Burke’s heavy hit on Harnedy at a crucial juncture. It wasn’t exactly flush on shoulder to shoulder and on another day might have bought a free and an easy point.
One-point defeats leave you mulling over all these what ifs but the bottom line is that Cork in their present iteration are not good enough.
For Galway the story is slightly better – but only slightly. Midway through the second half a little sequence of well-executed points did enough to just about get them over the line. They’re still over-reliant on Conor Whelan in attack and Joe Canning is right – this display simply won’t do against Limerick.
Canning was wrong, though, on the denying of a penalty to Wexford. Lee Chin had slipped his man and it doesn’t matter that defenders are rushing back, if he escapes that tackle there’s a clear goal chance. This is what the cynical foul rule was introduced for and increasingly referees are blinking at applying the rule with its heavy penalty.
Mind you, this has to be balanced by the decisions to award the two Wexford goals despite square infringements. The second goal was quite clearly illegal, with Ciaran McDonald in the parallelogram in the lead-up to Lee Chin’s finish. The first one, though, was very marginal so you might excuse the official there.
Either way, we can argue the pros and cons of these decisions but ultimately the better side won and most neutrals are thankful for that because Clare represent the best possibility of another serious challenge to Limerick.
The hangover from the Munster final was clearly visible in much of Clare’s early efforts but they ground out a result while playing below par, which is always an encouraging sign.
They’ll need to get their free-taking sorted, though, because on a key day in Croke Park you can’t afford to squander opportunities like that. It’s the one major plus that Kilkenny have – Reid is the most lethal sniper in the game and if it comes down to a tight finish that can be crucial.
I like the shape of Clare, though. They’ve summered well and now head to Croke Park with a fair wind in their backs. They’re probably still too reliant on Kelly blowing out the lights but the return of Shanagher was encouraging and with players like Shane Meehan and Mark Rodgers available their depth has definitely improved. Their clash with Kilkenny should be instructive.
Finally, a parting comment on the suspensions’ saga. Many people were delighted when the cited players were free to play, which is an understandable reaction. However, it’s never a good day when foul play escapes justice.
From the GAA’s perspective this whole episode was a retreat back to the dark old days of technicalities. Some of us are of an age to remember the past when cases were won and lost on whether a signature was in Irish or whether the paper used was Irish watermarked. We thought things had moved on but clearly not.