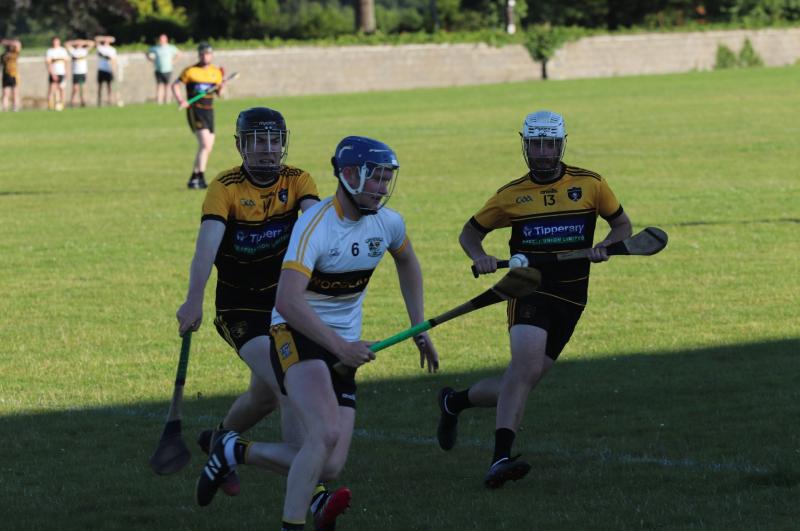 Knockavilla Donaskeigh Kickhams, 2020 West Intermediate Hurling champions, booked their place in the 2022 decider courtesy of a five-point win over Arravale Rovers in a sunny Bansha on Friday evening.
Kickhams were full value for their win despite playing three quarters of the game with 14 men following the dismissal of Jack Ryan early in the first half. They were far more clinical and sharper than their opponents and always able to respond to any Arravale attack. Twice during the course of the game, they responded well from the concession of goals. Their work rate was especially evident following the reduction to 14 men when they worked up an eight-point advantage by the 20th minute. Arravale to their credit fought back and the deficit was brought to just two points at the interval.
Arravale pushed hard in the second half and a second Cormac Maher goal in the 37th minute drew the sides level. While the game remained close for a long period it was as close as Arravale got and a strong finish from Kickhams saw them over the line with the luxury of hitting 16 wides.
The opening exchanges were fairly even with the sides level twice in the first four minutes. Ben Loughman pointed Kickhams in front only for it to be quickly cancelled out by a Mikey O’Dwyer free. Conor Horgan got his account open only for John Paul Lohan to level with Arravale’s first from play. Kickhams though found their rhythm quicker with points from David Butler, Dean Thompson and Stephen Browne (free). Johnny Ryan kept Arravale in touch including one superb score catching in his own half back line and immediately finding the target from long range.
By the 12th minute the Kickhams held a slender one point advantage and looked the more threatening to this point but Arravale had stuck with them. Kickhams were reduced to 14 men, though for the next ten minutes or so they looked to have the extra man. They also had to reshuffle their pack with Conor Horgan coming out the field having started full forward. Players like David Butler and Paudie Slattery came far more into it taking the fight to their opponents.
Arravale on the other hand struggled to make use of the numerical advantage with passes often going astray as they struggled to get their full forward line involved.
Stephen Browne continued his accuracy from placed balls while Ben Loughman hit a monster effort from centre back. Kickhams were moving the ball quicker and this resulted in Dean Thompson setting up Paudie Slattery for the opening goal. Kickhams now held a 1-11 to 0-6 advantage with ten to play in the half. 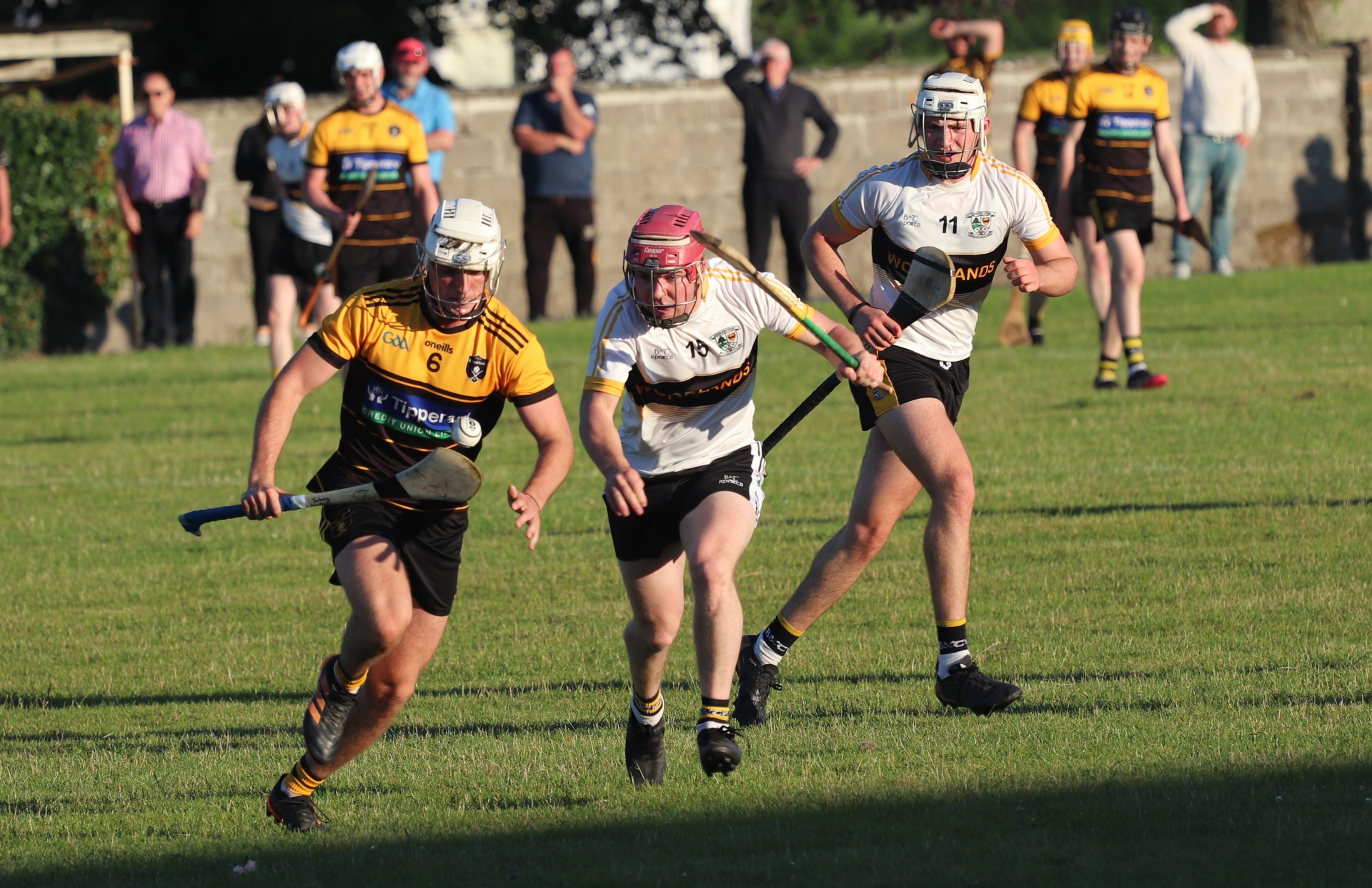 Up to now Kickhams had responded well to any Arravale attack, scoring if Arravale had pointed or missed a chance. It was Arravale’s turn to hit a purple patch with Mikey O’Dwyer adding to his account.
John Paul Lohan who started corner forward was brought to the half forward line with more effect while Matthew Moroney went to the full forward line. Arravale had the gap to five but needed a goal before the interval and it duly arrived following good work from Matthew Moroney and Eoghan Lonergan with the latter finding Cormac Maher for the green flag. Kickhams holding sway at half time 1-13 to 1-11.
Arravale Rovers changed their team around for the second half, with Johnny Ryan and Conal Donovan going to midfield while Niall Fitzgerald and Raymond Kelly went to defence.
As the half progressed these changes seemed to give the town side more balance. Kickhams hit the ground running and cancelled out the goal conceded just before the break. Ben Ryan, Daniel Lonergan and Stephen Browne all on target. Arravale now looked more settled especially with Johnny Ryan freer in the middle third and points from him and a goal from Cormac Maher tied up the game, the goal coming from good work by John Paul Lohan. This looked to be the spur Arravale needed but they failed to hit the front with handling errors and poor passing at times hindering them.
Kickhams just like the concession of the first goal responded with points from Conor Horgan (2) and David Butler. Horgan was now getting on a lot of ball around the middle of the field. The game continued to remain in the melting pot and in the early stages of the last ten minutes Mikey O’Dwyer twice brought the deficit to a single point. Arravale though struggled to find the levelling score but did force Jack Breen into two saves late on.
A sharper and more confident in possession Kickhams finished stronger with points from Jamie Duncan, Conor Horgan, Eoin McCormack and David Butler to book a second West Intermediate hurling final spot in three seasons.

* A minute’s silence was observed before the game for the memory of the late Mary (Mai) Kennedy mother of former West Board PRO JJ Kennedy.