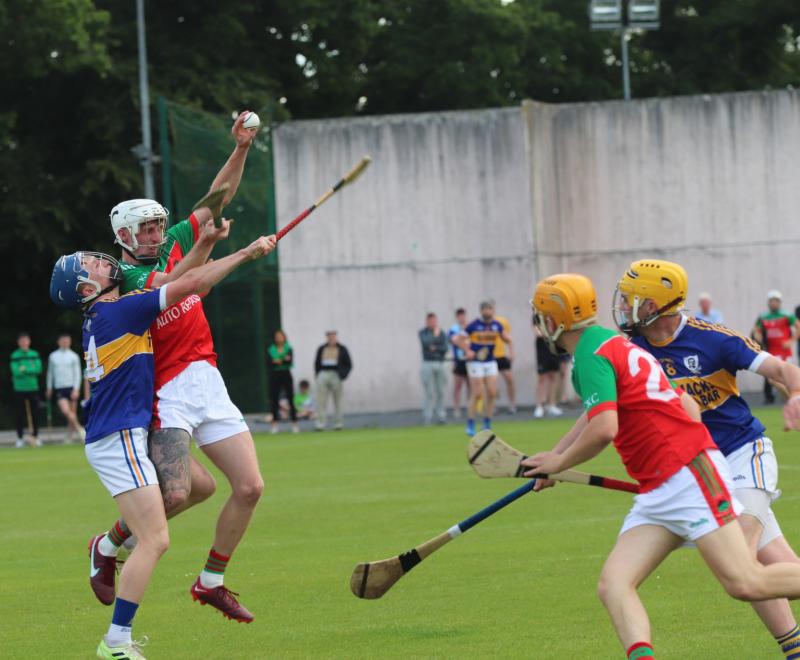 Cashel King Cormacs claimed the first ever Tipperary Co-Op West Premier Intermediate Hurling Championship title on Saturday evening when accounting for Sean Treacys in a balmy Dundrum. Sean Treacys had won when the sides met just recently in the Crosco Cup in what had been another close encounter.

In a two-horse race both sides eyed silverware but it was Cashel King Cormacs who just had that bit more on the day to claim the Leahy Cup for 2022. Cashel looked as if they would pull away in the early stages and Eoghan Connolly’s third minute goal from a penalty gave them a huge advantage. Sean Treacys got a huge boost midway through the opening half with Matt Feehan’s goal and the game remained close throughout with rarely more than three or four points between the sides until Cashel King Cormacs finished strongly to claim the honours.

Pat Deegan named at midfield but playing at half forward got Sean Treacys off the mark in the second minute but despite the closeness of the game it was the only time they would lead in the encounter. Ross Bonnar who had a huge presence throughout the sixty minutes tied the game for Cashel with a point from play.

Cashel looked sharper from the outset and set their stall out early with their half back line well in control and Eoghan Connolly the launch pad for their attacks. Cashel got a huge boost in the third minute when they were awarded a penalty following a foul on Conn Bonnar. Eoghan Connolly stepping up to drill the sliotar to the net. While Shane Stapleton replied with a pointed free for Sean Treacys it was Cashel who were dictating terms and looking far more in control in a lot of sectors on the field. Ross and Conn Bonnar both pointed from play before corner forward Ger Browne opened his account.

Browne’s presence in the air would prove a huge threat for Cashel as the game progressed. By the ninth minute Devon Ryan (free) and Ross Bonnar had extended Cashel’s advantage out to seven points. Patrick Carey and Mike Feehan both pointed for Sean Treacys but Cashel responded in kind.

Cashel looked in control but then it was Sean Treacys turn to hit a purple patch. Pat Deegan led the charge with two points while Darragh Kennedy got in for his first. Cashel looked as if they would cancel out the opposition reply when Ger Browne won a great ball and headed for goal only for his effort to graze the post and go wide. It got better for Sean Treacys when Matt Feehan finished to the net following good work by Pat Deegan.

Cashel continued to push the game out to three or four points helped by two long range frees from Eoghan Connolly. Treacys not be outdone responded with points from Patrick Carey and Shane Stapleton placed balls before Jody Ryan playing at full forward opened his account to see just two points between the sides at half time. The game finely balanced with Cashel leading 1-13 to 1-11 though Cashel for long stretches of the half had looked as if they could have been further ahead.

The majority of the second half was a close affair as the lead jumped between two and three points, Cashel always holding sway and looking in command but never fully pulling away. Patrick Carey kept Sean Treacys in touch from placed balls with Devon Ryan and Eoghan Connolly keeping Cashel’s noses in front. Carey’s free in the tenth minute cut the gap to the minimum but two in a row from Devon Ryan stretched the gap back out to three points by the three-quarter mark.

Cashel were again proving the greater threat with Ger Browne and Ross Bonnar to the fore in attack. Browne’s ability to win ball in the air and his vision were a huge asset to Cashel. Jody Ryan cut the gap with nine to play to the minimum once more but it was Cashel who finished stronger pulling the lead out to four and then five with Ross Bonnar, Eoghan Connolly, Adrian Cummins and Ger Browne all on target.

With the clock ticking down Sean Treacys had a number of chances to draw level but failed to find the target. As Cashel increased their advantage it forced Sean Treacys to try and lob the sliotar in around the square in the hope of getting the ball but each time the Cashel defence came out with possession.