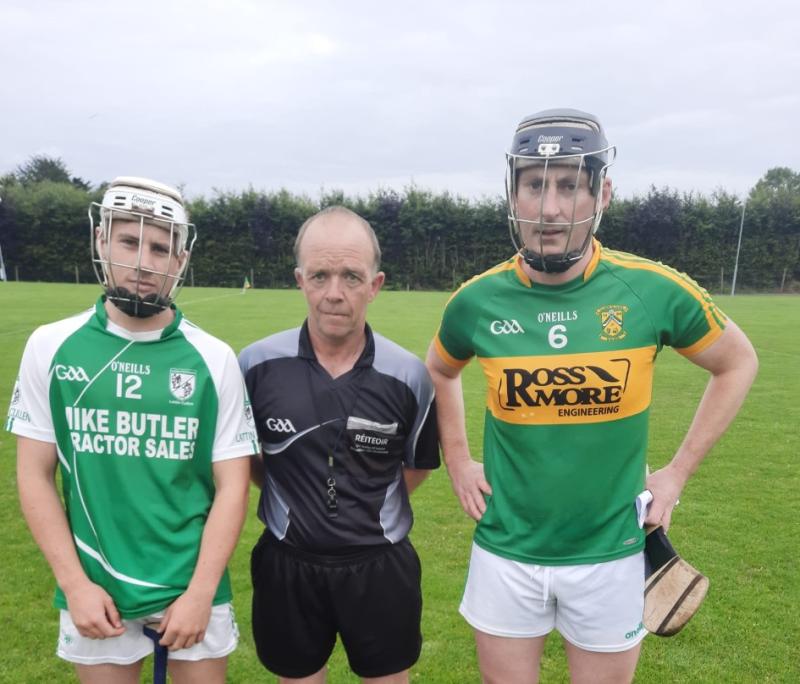 Clonoulty Rossmore made it three wins from as many outings in this year’s Gleeson Concrete West Junior A hurling championship when overcoming Lattin Cullen at Clonoulty on Thursday evening last.
Prior to this game, Clonoulty were guaranteed a semi-final place and this victory almost secures them top spot on the table. Lattin came into this game missing five regulars and the loss of so many established players had a significant effect on the outcome.
This victory was built around a solid defence with the Heffernan brothers, Padraig and James, manning central positions.
Jack Ryan (Casey) and Aidan Loughman put in big shifts around the middle third while the attack, as a unit, took their scores with ease, particularly in the opening period.
Lattin never gave up with Jack Whelton between the posts pulling off a number of saves. While their defence was under considerable pressure, Shane Russell at full back and Ed O’Meara were always to the fore.
The home side put in a big first half performance and with Paudie White and Nathan Slattery picking off some good scores, they led at the break , 0-15 to 0-3.
Lattin came more into the game after the break, Jack O’Halloran tacked on a few points from placed balls while Diarmuid Looby and Paddy O’Donoghue got in for two goals around the three-quarter mark. However, Clonoulty finished the stronger, hitting 1-5 without reply in the closing minutes.
Clonoulty hit the ground running and went into a 0-5 to 0-0 lead by the 12th minute, with Aidan White (2), Paudie White, Jack Ryan (Casey) and Nathan Slattery getting on the scoreboard.
Jack O’Halloran got Lattin off the mark with a free on the quarter hour mark, but it was the home side who hit the next seven scores from all distances and angles. Jack O’Halloran scored his second of the evening with six minutes of the half remaining.
However, Clonoulty finished the half with points from Nicky Kearns, Aidan and Paudie White, while Stephen Moloney closed out the scoring with the last point of the half.
The third quarter produced more of the same, with Paddy Ryan and Paudie White keeping the scoreboard ticking over for the home side.
Jack O’Halloran, Diarmuid Looby and Paddy O’Donoghue replied with points for Lattin, but they trailed by fifteen as the game entered the final quarter.
Diarmuid Looby intercepted a short puckout from Clonoulty and crashed to the net for the game’s opening goal.
Paddy O’Donoghue took advantage of indecision in the Clonoulty defence to tap home a second on 17 minutes. Further points from O’Donoghue, Looby and O’Halloran cut the deficit to eight with five minutes remaining, but Clonoulty rallied and Paudie White goaled with three
minutes lof normal time left. Four points followed, without reply, in the closing stages, as the home side consolidated their position at the top of the table.
Scorers and Teams
Clonoulty Rossmore: Paudie White (1-10, 5 frees), Aidan White (0-4), Nathan Slattery (0-4), Aidan Loughman (0-3), Paddy Ryan (0-2), Nicky Kearns (0-2), Jack Ryan (Casey) (0-1), Padraig Heffernan (0-1), Adam Fryday (0-1), Stevie Quinn (0-1).
Lattin Cullen: Jack O’Halloran (0-6, 5 frees), Diarmuid Looby (1-2), Paddy O’Donoghue (1-2), Stephen Moloney (0-1).
Clonoulty Rossmore: Jason O’Dwyer, James Ryan (Winnie), Padraig Heffernan, Niall Shanahan, Adam Fryday, James Heffernan (captain), Donnchada Quirke, Aidan Loughman, Jack Ryan (Casey), Paudie White, Aidan White, Paddy Ryan, Sean Ryan (Raymond), Stevie Quinn, Nathan Slattery.
Subs used: Nicky Kearns for Sean Ryan (Raymond) (10 mins, inj).
Lattin Cullen: Jack Whelton, Thomas O’Donoghue, Shane Russell, Lawrence Coskeran, Niall O’Shea, Ed O’Meara, Darragh O’Brien, Stephen Moloney, Ray Hennessy, Paddy O’Donoghue (Aherlow), Ben Carey, Jack O’Halloran (captain), Sean Mullins, Diarmuid Looby, Gary Quirke.