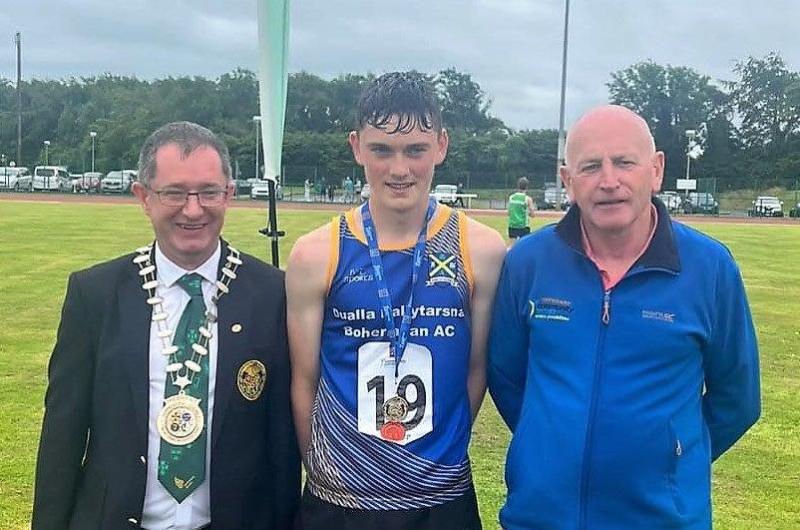 Daire O’Donnell, Boherlahan who ran a super race to win the coveted gold medal in the Under 16 Boys 1,500 metres. He is pictured with Gerry McGuinness, national president and Micheal Maher, chairman

The Munster regional finals of the Aldi/Bus Eireann Community Games took place in John O’Sullivan Park, Ennis on Saturday last.
Tipperary competitors did very well, bringing home a total of 13 medals overall from the following events. Congratulations to all the medal winners and very well done to all participants.

Pewter:- (5)
U12 Boys 100m Harry O’Donoghue, Roscrea.
U14 Girls 80m Hurdles Sarah Bartley, Kilsheelan- Kilcash.
U16 Boys 100m Killian O’Hora, Newport.
U16 Girls 100m Ava Palmer, Newport.
U16 Boys 200m Dillon Walsh, Newport.
Each of the Tipperary competitors gave a very good account of themselves. It is always an honour to represent one’s county. It was a first time competing at this level for some participants, who learned a lot from the experience while having fun and making new friends.

Each of the 13 medal winners has qualified for the National Finals which will take place in Carlow IT on Saturday, August 13. We wish them the very best of luck. Thank you to all volunteers who made themselves available to travel to Ennis to assist with the finals and to all parents for their support.

COUNTY FINALS OF GAA EVENTS ON SATURDAY
The County Finals of the five GAA Events - U10 Mixed football, U11 Hurling, U12 Girls football, U14 Girls Football and U14 Camogie will be held in Holycross on Saturday, August 6.
A timetable of events will be issued shortly.

SOCCER FINALS ON SUNDAY
The county Finals of boys and girls u12 and girls u15 Soccer are due to take place on Sunday, August 7.
Venue and times to be confirmed.