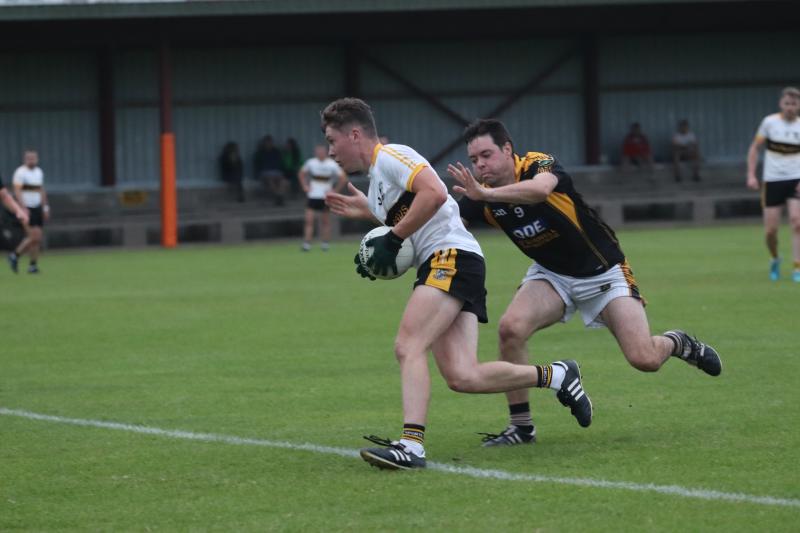 Played in ideal conditions Kickhams looked well in control at times during the opening thirty minutes but goals from Shane Carroll and Jason Ryan gave Emly a slight advantage at the break. Kickhams playing the majority of the second half with fourteen men flipped the deficit on its head when the sides resumed to go five points clear.

Emly continued to battle but struggled in front of the posts despite a period of dominance. Ten minutes from the end Joe Fitzgerald goaled which was a killer blow to the Emly men and ultimately secured the result for Kickhams.

Kickhams were well in charge in the first ten minutes opening a five point to two lead. Their shooting boots were clearly on with each shot on target finding the range. Jamie Duncan and Conor Horgan kicked early points for Kickhams with Conor Phibbs getting Emly off the mark. Emly did look dangerous in attack when they did get the ball into the final third early on but it was Kickhams who dictated terms.

Orrin Jones was a constant threat finding his range kicking two points from play while Elliot Thompson cut through the Emly defence before seeing his shot well saved by Kevin McGrath in the Emly goal. Kickhams kicking their first wide in the fourteenth minute. Minutes later Derek Breen was forced in a good save at the railway end of the ground.

Both teams were playing with a two-man full forward line with the third forward further out the field.  At the start of the second quarter Aidan O’Heney cut the deficit to two points before Shane Carroll sliced through the Kickhams defence to shoot past Derek Breen’s left and into the net. Carroll was a constant threat when running in possession.

Emly’s lead was short lived with points from Conor Horgan, David Butler and Orrin Jones. Kevin McGrath had to be alert again to deny Jamie Duncan a goal. The game turned again just before the break when Jason Ryan converted a penalty and Emly held a slight one-point advantage. David Butler replied with a pointed free but a superb point from the right boot of Joey Lonergan gave Emly the minimum of leads at the break, 2-4 to 0-9.

Dean Thompson tied the game in the fourth minute of the second half when his shot rattled the bar before going over. Thompson showing his pace going forward at numerous stages in the half. Kickhams advantage stretched to five by the quarter mark with points from Conor Horgan, Dean Thompson, Derek Breen and Orrin Jones.

By this stage they were playing with fourteen men following the dismissal of Conor Horgan (yellow + black). Emly enjoyed a sustained period of pressure but failed to make any major inroads on the deficit despite some good chances. David McGrath pointing in the twentieth minute from a placed ball their first score of the half.

The killer blow for Emly arrived a minute later when a well work Kickhams move through the hands resulted in Joe Fitzgerald eventually beating Kevin McGrath on his right side. Walter O’Carroll added a further point to stretch the lead to eight meaning all the six starting forwards were now on the board. O’Carroll had been showing well in the Kickhams attack throughout the sixty minutes. Emly battled hard for the remainder of the game.

Shane Carroll pointed from a free but they struggled to break the Kickhams rear-guard for another green flag. Michael O’Donnell had a late free going for goal but his effort rose over the bar. With that went David Grogan’s final whistle as Kickhams won by 1-16 to 2-7.

The result guarantees Kickhams a semi-final spot with a game to play along with Solohead. Emly’s fate is now not entirely in their own hands. They must defeat Sean Treacys in their final game and for Sean Treacys to lose against Kickhams. Should Arravale Rovers then defeat Solohead it would see Emly advance on the head-to-head with Sean Treacys.  Should Sean Treacys, Arravale Rovers and Emly finish level on two points the two remaining semi-finals spots will be decided by score difference.