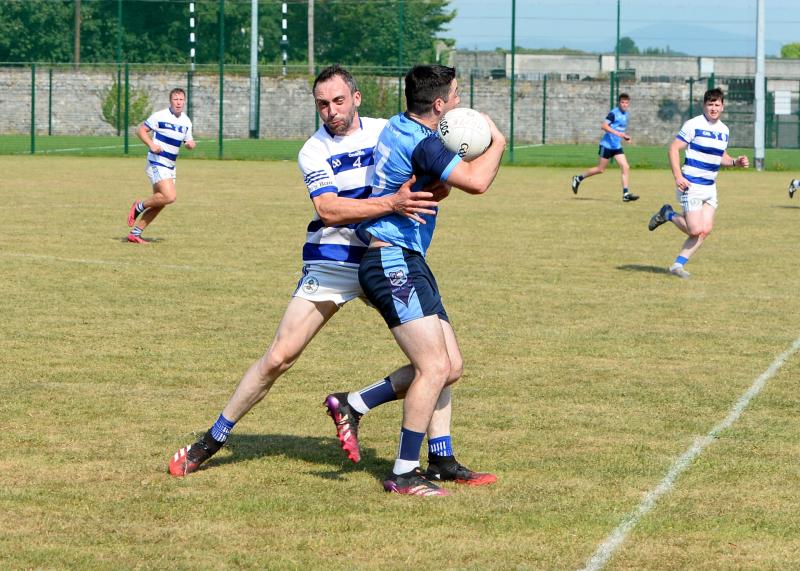 Moyle Rovers maintained their winning run in the FBD Insurance County Senior Football Championship at sun-drenched Cahir on Saturday, but not before surviving a huge challenge from Rockwell Rovers.
Moyle Rovers are now in pole position in the group after beating the only other unbeaten team coming into the game.
Both teams deserve tremendous credit for playing an absorbing encounter in such extreme conditions. Passes went astray, turnovers were common and players were suffering from cramp and fatigue in the dying stages but that was to be expected in temperatures touching 30 degrees
Yet players on both sides defied the intense heat. Four minutes from the end Moyle Rovers corner back Cathal McKeown was on the end of a flowing move that stretched the length of the pitch to kick a superb point.
Minutes later the outstanding Rockwell Rovers centre back Liam Fahey put in a lung-bursting run across the pitch to prevent a Moyle Rovers sideline ball and launched another attack for his side.
Fahey didn’t deserve to be on the losing team, superbly marshalling the defence and playing a pivotal role in many of the New Inn side’s best attacks.
Rockwell scored the game’s only goal, a brilliant strike from Tom Tobin just before the first water break, but they missed at least three more that eventually proved costly, as Moyle Rovers closed out the game without reaching their usual high level of performance.
A minute’s silence was observed before the game to honour the memory of Clonoulty/Rossmore and Tipperary hurler Dillon Quirke, and both teams stood down the number 11 jersey worn with such distinction by Dillon for his club.
Despite Alan Moloney pointing a Rockwell free for the opening score in the second minute, following a foul on Patrick Halley, Moyle Rovers responded in style to hit five without reply to lead by four after twelve minutes.
Shane Foley levelled within thirty seconds and the Powerstown/Lisronagh club went in front when Jack Harney brilliantly broke up a Rockwell attack and following a foul when play switched to the other end, team captain Liam Boland pointed the free.
Harney then set up Danny Owens for a point on nine minutes, Boland extended the lead in the next move and Boland again made it 0-5 to 0-1 from a free.
Rockwell were well in the game but some poor shooting was proving costly, especially when TJ Ryan played an inch-perfect pass to Patrick Halley through on goal but with only Ciaran Kenrick to beat, he hit it low and wide.
But just when it looked like the game might be slipping away from Rockwell Rovers, they responded in style just before the water break. Their best move of the game involved Joseph Lawrence, Tom Downey, Gavin Ryan, Tom Tobin and Luca Fitzgerald before it fell to Tobin for a second time to shoot past Kenrick for a crucial score.
They might have scored a second on the resumption but this time Kenrick saved well from Kevin Cleary. A great point from Liam Fahey tied the score at 0-5 to 1-2 in the 18th minute but Moyle Rovers hit four without reply from the boot of Liam Boland, three from frees, to take a 0-9 to 1-2 lead into the second half.

Rockwell were the better team in the third quarter, upping the pace considerably despite the draining conditions, and even though Danny Owens extended the Moyle lead one minute into the half, the New Inn side hit back with four without reply.
Another goal chance went a-begging when Joseph Lawrence fluffed his shot when a TJ Ryan shot came back off the post, but they didn’t let that deter them and three Moloney frees and a great score from play from Joseph Lawrence, with Tom Tobin and Kevin Cleary prominent in the build-up, left them just one in arrears, 0-10 to 1-6 at the water break.
However they failed to score again despite two more goal chances. Lawrence saw a shot blocked and then Liam Fahey saw a punched effort come back off the crossbar. Moyle Rovers cleared it for a 45 but Alan Moloney was then off-target with his kick.
Moyle Rovers profited from the let-offs and Boland from a free, sub Sean Cotter hitting the target and Cathal McKeown’s late effort saw the south side four clear at the break and now leading the group with two wins from two.
Moyle Rovers: Ciaran Kenrick, Cathal McKeown 0-1; Luke Boland, Aidan Foley, Luke Fogarty, Jack Harney, Brian McKeown, Rory Collins, Ben Owens, Diarmuid Foley, Danny Owens 0-2; Dara Ryan, Shane Foley 0-1; Liam Boland, 0-8, 6 frees; Luke Delahunty.
Subs: David McGrath for Fogarty; Sean Cotter 0-1 for Delahunty.
Rockwell Rovers: Eoghan Doyle, Paul Halley, Robert O’Donnell, Liam Lonergan, Kevin Cleary, Liam Fahey 0-1; Gavin Ryan, Tom Downey, Tom Tobin 1-0; Luca Fitzgerald, Alan Moloney 0-4 frees; Aidan Barron, TJ Ryan, Patrick Halley, Joseph Lawrence 0-1.
Subs: Eoin Shine for Paul Halley, Mickey Barron for Aidan Barron, Patrick Keating for Tobin.
Referee: Derek O’Mahoney (Ardfinnan).