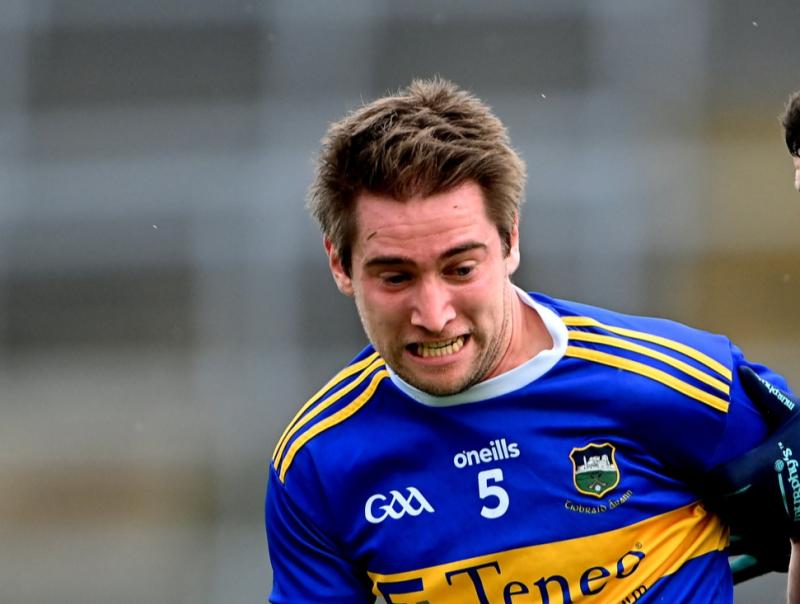 Kilsheelan/Kilcash signalled their intentions from the throw-in in this entertaining and fast moving County Senior Football Championship game played in Cashel on Saturday evening last.
The severe heat of the day had abated somewhat as both teams took to the field.
From the moment that referee Sean Lonergan threw in the ball, Kilsheelan/Kilcash were fast out of the blocks and Barry Kehoe, who was fouled pointed the resultant free.
Kilsheelan/Kilcash won the kickout and the ball was moved swiftly into Mark Stokes in front of goal and he made no mistake to rattle the net for his side’s first goal.
It was then Drom’s turn to win the kickout and deliver to David Butler and he opened their account with a fine point. Almost immediately Kilsheelan’s Billy O’Connor took the ball out of defence and moved it swiftly to Jamie Roche, who spotted Barry Kehoe out on the wing and hit a long ball directly into his grasp. Barry moved the ball fast into the path of Paul Maher who made no mistake with Kilsheelan/Kilcash’s second green flag by the seventh minute.
Drom/Inch were rattled at this stage and Kilsheelan/ Kilcash continued their onslaught as their defence, led by Daire Brennan, contained everything that the Drom attack could muster.
A great point by Jamie Roche from a tight angled free and two more from Barry Kehoe’s free and Mark Stokes put further distance between the sides. Evan Comerford came from his goalmouth to point a 45 and Barry Kehoe, who was causing havoc in the Drom defence, had a point from play.
Drom were trying hard to break through the tight Kilsheelan defence and after a period of lateral play Jamie Malone slotted over their second in the 20th minute. The reply from Kilsheelan/ Kilcash was swift, however, and Cathal Kelly was on hand to deliver their seventh point. Mark Kehoe gathered from the kickout and after quick delivery into the forward area, Bill Maher took advantage of some indecision in the Drom defence to kick a ground ball to the net.
Drom finished the scoring on the stroke of half-time with a David Butler point to leave the half-time score Kilsheelan/Kilcash 3-7 Drom /Inch 0-3.

Drom were a different proposition in the second half and particularly in the third quarter, as they sought to redress the balance between the sides. Robbie Long had a good point for his side but this was countered by a fine point by Paul Maher after a great run and delivery by Mark Kehoe.
Drom replied with a point by David Butler, who was easily their best player, and only for he was held in check by a player of the calibre of Daire Brennan he could easily have run riot in the Kilsheelan/Kilcash defence.
Drom continued to attack strongly and a crossfield ball by Thomas Nolan gave Evan Comerford some problems in the Kilsheelan/Kilcash goal and he was relieved to tip the ball over the bar.
On several occasions the woodwork deprived Drom of vital scores, as Kilsheelan/ Kilcash faltered somewhat.
Barry Kehoe kept the scoreboard ticking over for them while at the other end David Butler kicked over two points, one from a free, after being fouled.
Kilsheelan/ Kilcash emptied the bench as the game moved into the last quarter and the fresh legs gave them a new lease of life and they finished the stronger side. Mark Kehoe showed his speed with a great run and a point and he later followed with two on the trot.
His brother Barry kicked over two points as well to widen the gap. Sub Conor Neville kicked a great point from an acute angle to close his side’s scoring, while Drom finished with two points by David Butler and a fine score from John Ryan.
Kilsheelan/Kilcash fielded their strongest side to date, with a number of key players returning from injury. Their style of quick, direct play, particularly in the first half, had their opponents in big trouble from an early stage.
Drom/Inch had a very bad start but never gave up and in the third quarter were quite a handful for Kilsheelan/ Kilcash. If the margin had been closer at that stage, it could have been a tight finish.
The Kilsheelan/Kilcash defence was outstanding all through and never let Drom in for a goal. Captain Daire Brennan led by example and was well supported by his fellow defenders. Cathal Kelly and Jamie Roche kept the ball moving from around midfield while Barry Kehoe was outstanding upfront and had great support from his brother Mark, as well as from Paul and Bill Maher and Mark Stokes.
Drom’s outstanding player was David Butler ,who was a constant threat when he got possession in the forward line. Others to perform well were Emmet Moloney, John Ryan, Robbie Long and Tommy Nolan.
Kilsheelan/Kilcash: Evan Comerford (0-1 ‘45), Jason Madigan, Daire Brennan, David Corcoran, Billy O’Connor, Martin Gibbs, Eoin Kehoe, Jamie Roche (0-1), Cathal Kelly (0-1), Mark Stokes (1-1), Mark Kehoe (0-3), Bill Maher (1-0), Barry Kehoe (0-6), Paul Maher (1-1), Billy Murphy.
Subs: Conor Neville (0-1), Aidan Keane for Paul Maher, Sean Freaney for Billy Murphy, Conor Neville for Jamie Roche, Sean Ryan for David Corcoran.
Drom/Inch: Shane Hassett, Michael Purcell, Fintan Purcell, Michael Connors, Kevin Hassett, Emmet Moloney, Robbie Long (0-1), John Ryan (0-1), James Moloney (0-1), Jack Lillis, Michael Campion, Thomas Nolan (0-1), Paul Bergin, David Butler (0-7), Steve Nolan.
Referee: Sean Lonergan (Moyle Rovers).