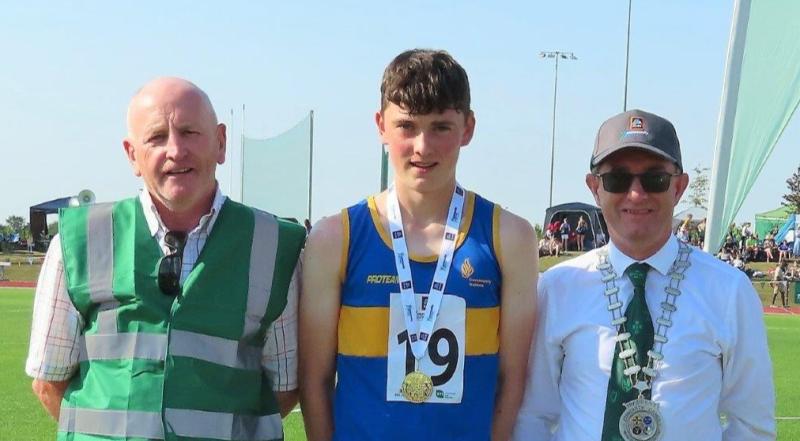 Sixty competitors from Tipperary were among the cream of the crop competing in beaming sunshine at the SETU Sports Campus in Carlow at the Aldi Community Games National Track and Field finals.
Each and every one of the competitors gave an excellent account of themselves, with many reaching the coveted semi-finals and finals, with the overall medal haul amounting to two gold, three silver, one bronze and one pewter.
Daire O’Donnell, Boherlahan followed up his Munster victory with a spectacular run to win gold in the boys Under 16 1,500 metres This was a super performance by this talented young man and we are sure to hear a lot more of him in the future.
Never out of the first three in the race, Daire cruised into the lead with two laps to go and the other competitors would had to have been super human to pass him.
Clodagh Donoghue, Newport was also amazing, winning gold in the girls Under 16 high jump, a very difficult event to master.
Silver medals were won by Killian Croke, Mullinahone in boys Under 12 200 metres, Lily Anne O’Meara, Roscrea in girls Under 14 80 metre hurdles and the Newport Under 16 mixed relay team of Killian O’Hora, Ave Palmer, Sophie Walker and Dillon Walsh.
Abbie Horgan, Boherlahan, won a bronze medal in girls Under 14 long puck.

A pewter medal was won by Sarah McGinley, Thurles in the girls Under 14 shot putt. Sarah’s cousin, Jamie Connor, competed in the boys Under 14 javelin while another cousin, Dylan Cotter, was a member of the Thurles Under 16 boys relay team and her dad Adrian won the pole vault and was second in the 400 metres hurdles at the National Masters Championships in Tullamore that morning, before travelling to Carlow to support his family
2,000 children, along with their families and supporters, totalling over 4,000, travelled from all over Ireland to Carlow to represent their county with pride.
The event was livestreamed to an audience of over 30,000 on Facebook and YouTube.
Volunteers ensured the day ran smoothly, handing out sun screen and over 7,000 bottles of Aldi water, so that everyone was hydrated
Throughout the day, 28 different track events took place, from mixed relays to 100 metre race events and 14 field events from ball throw to long puck. 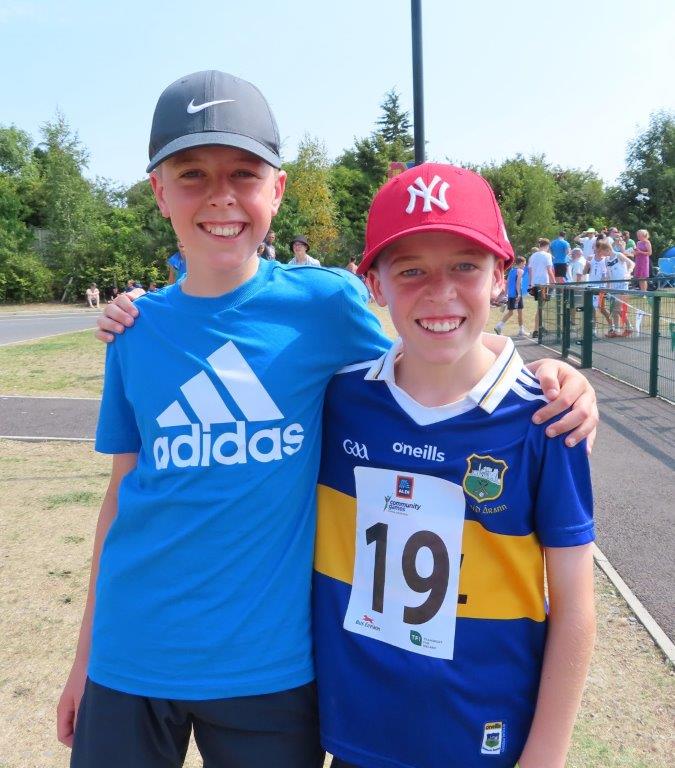 Above: Brothers Padraig and Killian Croke from Mullinahone at the Aldi Community Games track and field national finals, when Killian (right) won silver in the boys Under 12 200 metres

The children who competed, aged from 6 to 16, already have a lot to be proud of, having qualified in their area final, then the county final and finally the regional final (for track events) to make it to the National Finals.
Community Games ambassadors and past participants Jesse Osas, Sarah Quinn, Adeyemi Talabi and Conor Cusack were present to celebrate and encourage the children taking part.
The President of Aldi Community Games, Gerry McGuinness said “This was a marvellous event showcasing the talent from every county in Ireland for track and field.
“Every child was a credit to themselves and their locality. Congratulations to one and all.
I thank SETU Carlow for the use of their amazing facilities and their support in the organising of this event.
“I also thank our outstanding volunteers, who as always make these events possible, and our sponsors Aldi Ireland, Bus Éireann and Transport for Ireland.”