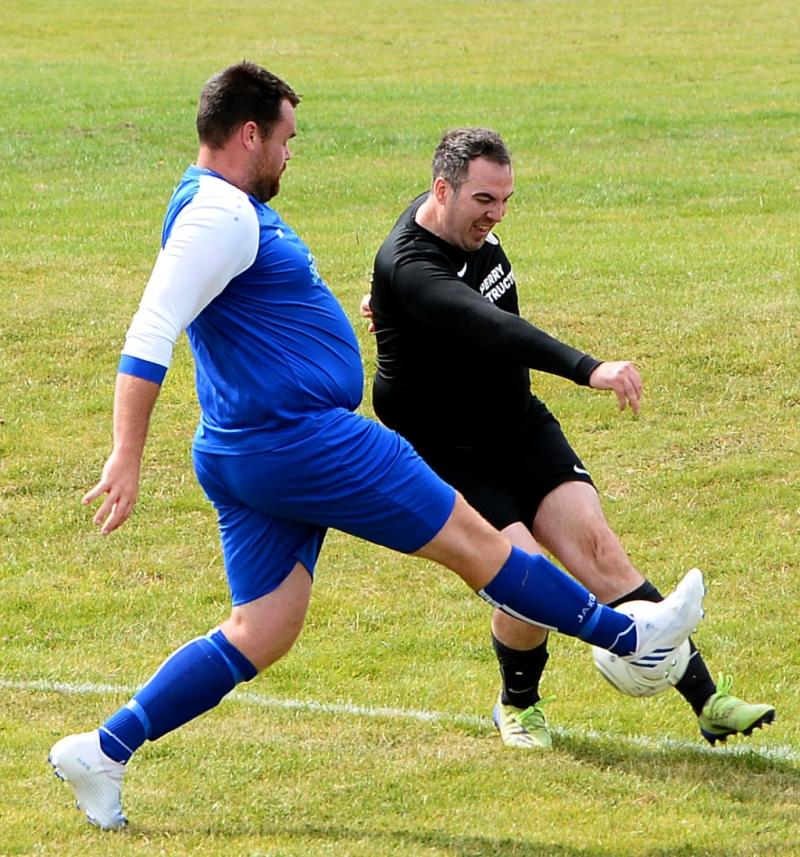 St Michael’s 1 – 2 Tipperary Town
Tipp Town took first blood in the local derby against rivals St Michael’s by virtue of a stronger second half, to maintain their 100% start to the new First Division season. The first half was largely even with both sides having their moments but neither managed to make their chances pay.
At the beginning of the second period, the away side got a grip on midfield and pushed Saints back consistently. Maher missed a glorious chance ten minutes in when he was released by Marky Roche’s pass but his shot went agonisingly over the bar. A goal was coming though, and Roche finally put Tipp Town ahead on 68 minutes when he headed home a Dean Cummins cross. The same player made it 2-0 minutes from the end, when he finished off a Michael Ryan free kick, and although the hosts got a goal back in stoppage time when Josh Flannery turned in a Danny O’Brien cross, but it turned out to be too little too late.

Old Bridge 0 – 1 Clonmel Town
For a game that was played in sweltering heat, this turned out to be a dour struggle between neighbours Old Bridge and long time rivals Clonmel Town. The visitors were on the front foot from the start but despite their territorial and possession advantage they didn’t create any good chances and were limited to a few speculative shots from distance. However eight minutes before the break, they finally put together a move of quality and the ball broke to Kyle Delaney who slotted to the bottom right hand corner of net, putting the visitors in front.
The second half continued in the same vein as the first, with the away looking comfortable throughout but the home side put together a few efforts mostly from set pieces, before one very good effort 15 minutes from time when a Paul Denn shot was parried by the Town keeper only for it to break kindly for the visitors and be cleared away to safety.

Peake Villa FC 4 – 5 Cahir Park
A nine goal thriller was played out at the Tower Grounds on Sunday afternoon as Peake Villa’s seconds and Cahir Park got their respective league campaigns up and running. It only took five minutes for the visitors to break the deadlock when Willie Dunne got in behind the home defence to shoot from close in, but within four minutes Villa were level thanks to a Kevin Patan effort when he flicked home a corner kick at the near post.
It was end to end stuff and in the twenty eight minute Patan scored the goal of the game hitting home an unstoppable shot to put his side in front. Villa then made it 3-1, ten minutes before the break when a defensive error allowed Alex Moloney to cheekily dink a ball over the stranded Park keeper. But the visitors pulled a goal back from the penalty spot six minutes before the break when Willie Dunne scored his second.
The visitors were back on level terms 11 minutes into the second half when Dunne completed his hat trick and they took the lead just after the hour mark when Tom Keating broke through and fired home. But the goals kept coming and Villa had it back at 4-4 late in the game when Conor Murphy set up Alex Moloney and he made no mistake for ten yards out.
A draw would have been a fair result and this young Villa side deserved something but alas a ball over the top was not dealt with in the final minutes, and they were punished again by Keating, who got the ninth and final goal to take the points for the away side.