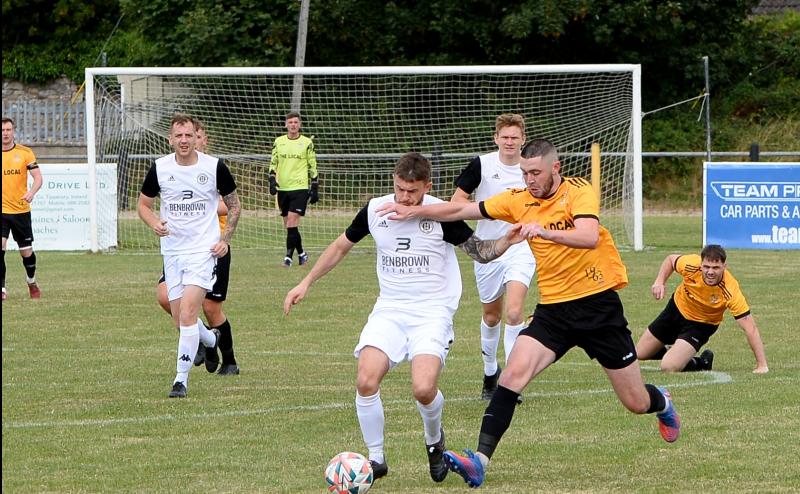 Clonmel Town 4 – 1 Wilderness Rovers
Four second half goals gave Clonmel Town a rather flattering 4-1 victory over neighbours Wilderness Rovers at The Complex last Sunday morning. In fact the perennial Premier League side had to come from a goal down before they managed to subdue last year’s First Division champions and take the points here.
The Wilderness had led at the break thanks to a stunning 22nd minute strike from Sean Browne. He controlled the ball brilliantly before unleashing an unstoppable shot past Evan Comerford to give his side the lead. They deservedly held that lead to half-time as Town struggled to break down a resolute Wildies defence. But Town have ambitions of winning the league this year, and came out fighting in the second period, finally levelling the game in the 53rd minute when Rhys O’Regan, who had been introduced as a first half substitute, got on the end of a great cross from Lee Costello to head home.
Sixteen minutes later the home side’s pressure paid off, when Ashley Lassett scored his first goal for his new club. He smashed home a rebound after Oisin Lavin did well to save a David Morrissey shot, and put the hosts into the lead.
With quarter of an hour left on the clock, Kyle Cuddy cut in from the left hand side to curl a beautiful shot past Lavin, and give Town the breathing space they needed, before Alan O’Donnell was upended in the box in the final minute and he fired home the resulting penalty to add a shine to the final score.

Peake Villa 4 – 1 Cashel Town
Peake Villa started out their season in flying form as they handed down another heavy defeat to a young Cashel Town team at the Tower Grounds in Thurles on Sunday morning. But they didn’t get it all their own way in the first half of a cagey affair where the visiting team were resolute in their defending as well as showing brief glimpses of danger on the counter attack.
The best chance fell to the visitors 10 minutes before the break, when Villa keeper Willie Tierney saved excellently down to his left, to keep the teams level at the break.
The home side continued to find it hard to break down a stern Cashel defence while been well on top early in the second half. But the deadlock was finally broken in the 60th minute when Dale Loughnane made a great run down the left and crossed to Robbie Stapleton who made no mistake from close in to open the scoring.
The hosts really went for it after this and added a second four minutes later when Stapleton was on hand again to make it two. Keith Cahill added a third with ten minutes left and Dylan Coady added a fourth with a good free kick in the final minute. The visitors did get a consolation goal in time added on, but it was no more than that.

All the weekend soccer results from the Tipperary Leagues

St Michael’s laid the groundwork here for this victory with three first half goals but credit to Vee Rovers they pulled a goal back early in the second half and battled resolutely to keep the Saints at bay in the second half.
The home side started quickly and had close efforts just off target from Rhys Byron and Joey Mulcahy before Byron opened the scoring just after the half hour mark when he took advantage of a poor clearance and found the corner of the net with a snap shot.
They got the second four minutes later when David Slattery was on hand at the far post to head to the net following a Colin Bargary cross, and Byron got his second just on half-time when he latched on to a rebound from Cormac Flynn following a Russell Quirke shot.
The visitors pulled a goal back five minutes into the second period when a Shane McGrath free kick took a strong bounce and evaded Tommy Holland in the Saints goal. But after that, they never really looked like they were going to trouble the champions and the home side ran out comfortable winners in the end.

Bansha Celtic 2 – 5 Two Mile Borris
Two Mile Borris picked up their first points of the season, when they hit five on the road against Bansha Celtic on Sunday afternoon last. The visitors started well creating a number of half chances, but it was the home side that opened the scoring when they were awarded a penalty kick and Daire Egan despatched the ball from the spot with aplomb.
The lead was short lived however, and Borris replied within five minutes when when Jamie Carey struck back after slipping the home side’s offside line.
Ten minutes later they took the lead when Carey again found space in the area and ruthlessly punished the home side with an excellent finish. And they made it three just before the interval when Micheal Foley finished well from the edge of the area.
Buoyed by this excellent first half performance the visitors continued to attack and made it 4-1 a quarter of an hour in when Darren Ivors fired home from the edge of the area.
The home side pulled a goal back thanks to a defensive mix-up which allowed Darren McGrath to cheekily lob the visiting keeper, but they seemed to visibly tire near the end, and the visitors completed the scoring with a goal by Jack Hackett to end the game 5-2 winners.