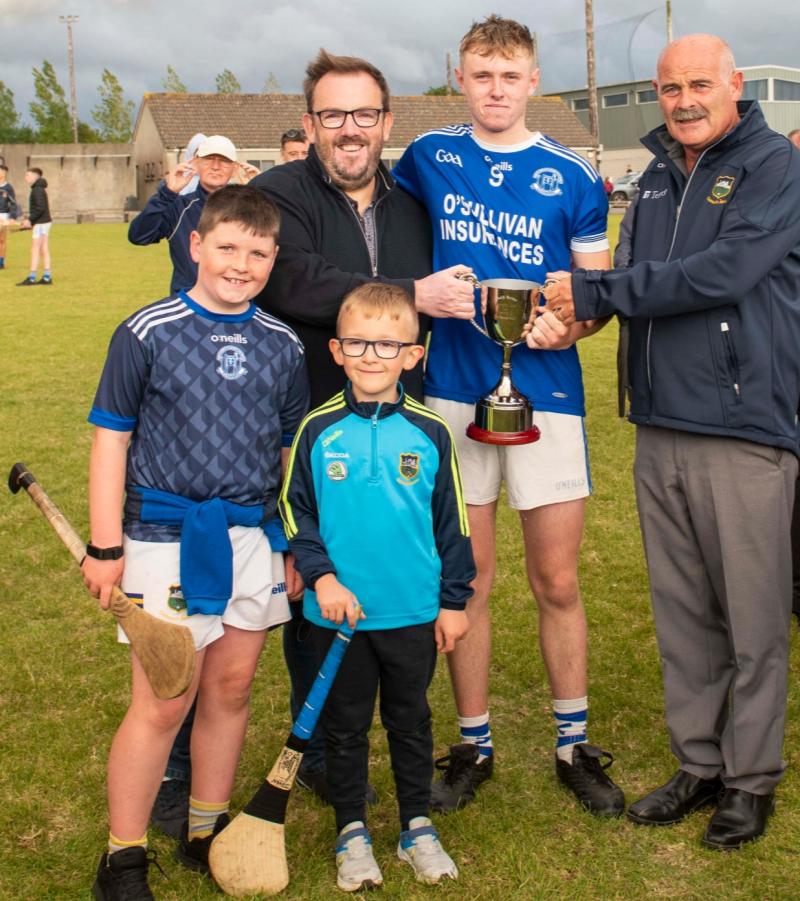 In Monroe on Sunday evening the O’Sullivan Insurance South Tipperary U 19A Hurling Final proved to be a close contest for most of the hour with the decider turning out to be a two-player game between Sam Rowan 0-9 of Mullinahone and Peter McGarry 0-7 of St Mary’s. Both performances were top class with both standing out heads above all others.
It was a game in which the wind played havoc on hand passes not assisting either side who had its advantage with wides, Mullinahone hitting 14 and St Mary’s eight, over the hour.
The Clonmel side also missed four goal chances while Mullinahone missed two they would regret by full-time.
Both teams started as per programme with Luke Foran referee observing a minute’s silence before the game for the Donal O’Keeffe, a former Clonmel Commercials county senior championship winning captain.
The final was slow to yield scores with only four in total in the first 15 minutes, two each for both sides all coming from frees by both no 11s, Sam Rowan and Peter McGarry. Spectators had to wait until the 18th minute before the game burst into life when Rian O’Halloran found Sam Rowan loose who in turn picked out Eoin O’Dwyer who with a great run passed all to blast home a fine goal to put Mullinahone in front 1-2 to 0-2.
This advantage for the CJK was short lived with St Mary’s lifting their game in all sections to score 1-4 without a reply. Ruairi Leahy had a point from play followed by a great passing movement with a fine goal from the in-rushing Oisin Forristal, and further points from Peter McGarry and a long range effort from Anthony Keeley.

The St Mary's Under 19A Hurling panel celebrate with the O'Sullivan Insurance Cup following their win over CJK Mullinahone in the final played at Monroe on Sunday evening. Pic: Michael Boland.

Mullinahone having wind advantage in that opening 30 minutes having amassed five of their eight wides in the first quarter at which stage St Mary’s led 1-5 to 1-2.
We then had an exchange of points from Sam Rowan free and from play by Dean Cagney as Michael Kennedy blew for half-time with the town side leading 1-6 to 1-3.
The third quarter produced four scores from C J Kickhams to St Mary’s two.
For Mullinahone, Eoin O’Dwyer, having been moved to centre-forward, pointed from play with Sam Rowan adding three more (one free). For St Mary’s Peter McGarry and Shane Ryan responded with with flags to leave the score at the 45th minute reading St Mary’s 1-8 CJ Kichams Mullinahone 1-7.
Having been level on four occasions up to the final quarter, we then had better hurling with both sides giving it their all from end to end. Over the closing 15 minutes St Mary’s adding on five further points, three from Peter McGarry (one free) and great score from an acute angle from Anthony Keeley and a free, the final score of the game from Ruaraí Leahy. In that spell C J Kichams raised four white flags, three from Sam Rowan (two frees) with their last point from play from Josh Rowan.