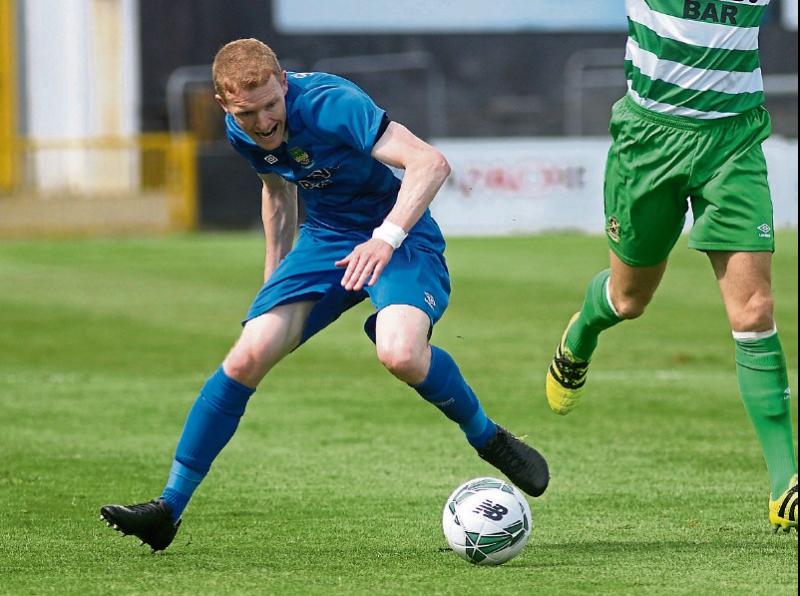 David Slattery came up with another valuable goal for St Michael's on Sunday last in their Munster Junior Cup first round game in Clonmel against Celtic.

When the draw was made for the first round of this year’s Munster Junior Cup South Tipperary section, this was always going to be seen as the glamour tie, with a rejuvenated Clonmel Celtic side going toe to toe with their perennial rivals from Tipperary Town.

And the game lived up to its billing, even if the underdogs were unable to dump the Saints out of the competition at the first time of asking.

A very wet surface contributed to the lively encounter, and the hosts had the first effort on goal with Tom Holland batting away a powerful effort from Seanie Hawkins after just two minutes. The away side settled into the game having lots of possession without really threatening the Celtic goal, but they did come close in the 28th minute with Fabian Kerton in the home goal getting down well to deny David Slattery.

The home side had the best chance to open the scoring minutes before the break when Darren Sweeney was taken down in the penalty box, but Tom Holland dived to his left to push away Seanie Hawkins spot kick effort.

Celtic were left to rue this miss, as just four minutes later they conceded a penalty themselves which David Slattery made no mistake with, and send his side to the break with that 1-0 lead.

The visitors started the second half on the front foot and doubled their lead when Celtic failed to clear and Russell Quirke fired though a number of players to find the net five minutes after the restart.
But they were given a lifeline minutes after the hour mark, when Sweeney was pulled down in the box for a second time, and this time Ayo Williams converted to make it 2-1.

Celtic pushed hard for an equaliser and Sweeney came closest 20 minutes from the end with an effort that just cleared the bar.

The Saints always remained a threat going forward and Slattery came close with a header that was just over 15 minutes from time. But there were to be no more goals, and in the end, it was the record cup winners that continued on in the competition.