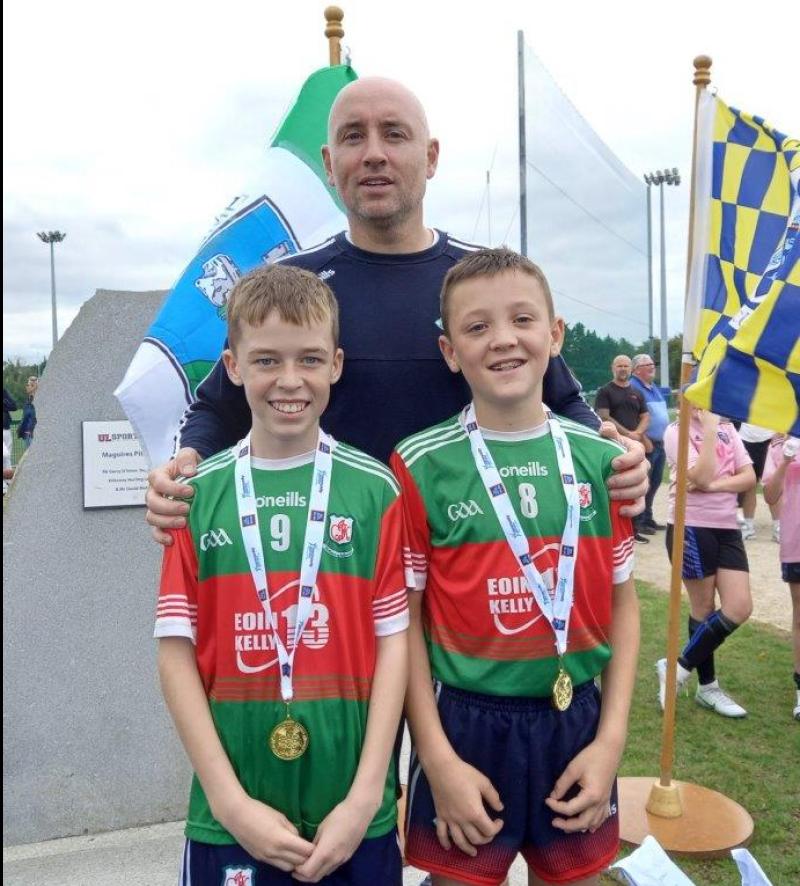 On a beautiful day in the superb facilities of University of Limerick Tipperary enjoyed great success winning gold in six events, silver in two with the remaining three teams runners up in the semi finals.
Congratulations to our six Munster champions:

Boherlahan Dualla u14 Camogie team defeated Ahane - Castleconnell of Limerick by a wide margin the the semi-final and went on to beat Doora Barefield, Clare 2-12 to 0-4 in the final.
These girls will be strong contenders in the National Finals in two weeks time.

Mullinahone u11 hurling team continued their great run of success beating Ballincollig, Cork in the semi-final and Sixmilebridge, Clare in the final.

Eoin Kelly, former Tipperary hurling great and Michael Cahill were both members of the Mullinahone team that won gold at the National Finals in Mosney in 1995. Eoin is now one of this team mentors his son Conal is joint captain and players David O’Mahoney and Tom Cahill are both nephews of Michael Cahill.

Ss Peter & Paul’s u14 Skittles team were very impressive defeating Limerick in the semi-final and Kerry in the final.

Roscrea U12 Girls 7-a-side Soccer team beat Kerry in the semi-final and Limerick in the Final.

Roscrea U15 Girls Soccer team won the Munster Final for the fourth successive year beating Regional, Limerick in the semi-final and Abbeydorney, Kerry in the final.

Cloughjordan u11 Tag Rugby team beat Kerry in their semi final and Limerick in the final. Fethard Killusty were runners up to this team in the County Final.

Silver medals won by:- Newport U11 GAA team. Following a good win v Limerick in the semi final they failed to contain the challenge of Ballincollig, Cork in the final.

Silver also won by Roscrea u13 boys Rounders team beaten by Monaleen, Limerick in the final.

There was excellent feedback from the day, everyone enjoyed themselves and are still “on a high” The very best of luck to the six Tipperary teams representing Munster in the National finals on September 24 and to all our competitors due to compete in the National Swimming finals which also take place on the same day in UL.

The county hope to run the Cross Country Finals within the next week.
Date to be confirmed.