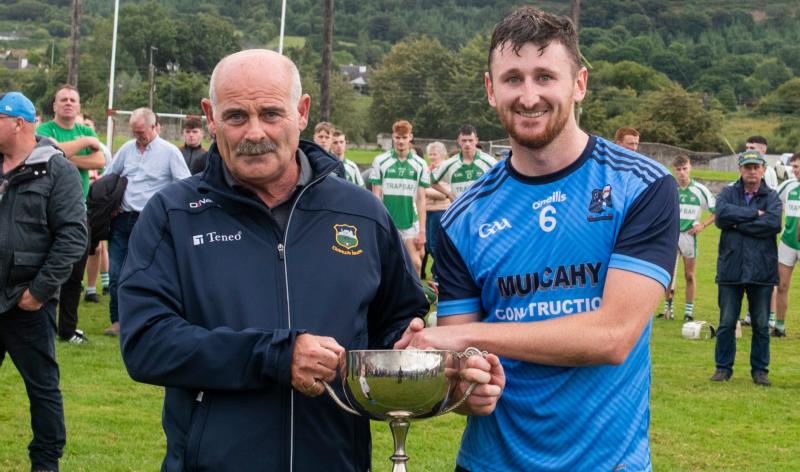 The Quirke Jewellers South Tipperary Junior A Hurling Championship final at Davin Park in Carrick-on-Suir was a dramatic, incident-packed and evenly-contested game that held the spectators interested right up to the final whistle.
The passion and many twists and turns that unfolded throughout also saw two red cards issued to each side.
The standout player over the hour was Dara Ryan of Moyle Rovers, who was closely followed by Darragh Shelley of Grangemockler/ Ballyneale. Both players shot some excellent scores over the hour and they were closely followed in terms of the quality of their performances by Stephen Quirke of Moyle Rovers and Ben Comerford of Grangemockler/Ballyneale.
A final of end to end excitement opened with a pointed free in the first minute from Dara Ryan from 70 metres. With a light wind blowing across the field, mostly in favour of Moyle Rovers, a shot that came back off the upright in the third minute was sent over the bar by Anthony Phelan to put Moyle Rovers ahead by two points.
On their first attack, Grangemockler were awarded a free that Darragh Shelly made no mistake in pointing. In the eighth minute Moyle Rovers got another long-range free from which Dara Ryan made no mistake to make it 0-3 to 0-1. Immediately Grangemockler Ballyneale’s Darragh Shelly scored a point from a free to narrow the gap and within a minute the scores were level when Jamie Walsh finished a move from a free taken by John Lyons.
That was followed by an exchange of points between Moyle Rovers’ Stephen Quirke (0-2) and a free from Grangemockler/Ballyneale’s Darragh Shelly.
A defensive error allowed Grangemockler’s Mikie Lyons in for a goal after a free came off the upright.
However Moyle Rovers regained the lead with four points in a row from Stephen Quirke (0-2, one free), Dara Ryan with his first from play and Morgan Irwin, the captain striking a magnificent point from a free from over 80 metres, leaving Rovers ahead by 0-9 to 1-4.
Grangemockler/Ballyneale were kept in the game when Moyle Rovers’ defence failed to clear a ball that was pounced on by Mark O’Meara, who struck a goal past Luke Delahunty to put them in front by a point.
However, the lead was again short-lived. Dara Ryan converted four frees to leave Rovers in front at the short whistle by 0-13 to 2-4.

The game really came to life after the resumption. Grangemockler struck first with a point from play from John Lyons.
Dara Ryan replied for Rovers and then a free from Darragh Shelly was cancelled out by Anthony Phelan.
Darragh Shelly scored another point from a free that was cancelled out by Darragh Luttrell before Shelly struck two more points, one from a free, to leave just a point between them.
In the last quarter the game became more intense, with tempers getting out of hand.
Darragh Shelly brought the sides level with a great point from a long-range free in the 48th minute, Dara Ryan pointed a free within a minute and then John Lyons had the sides level for the fifth time.
Then Moyle Rovers were awarded a penalty that Stephen Quirke struck at full force and when it came off the upright and back into play there was a fracas, resulting in Anthony Phelan of Moyle Rovers and a Grangemockler/ Ballyneale mentor receiving red cards.
When play resumed an accurate Darragh Shelly free put Grangemockler/Ballyneale ahead for the first time.
As the game entered the final 10 minutes Dara Ryan levelled with the next free and Stephen Quirke restored Moyle Rovers’ lead with a point from play.
The scores were level again in the 52nd minute with a John Lyons point from play.
Soon, two more red cards were issued when Grangemockler/Ballyneale’s Leon Kennedy and Rovers’ Danny Lyne received their marching orders.
Then Dara Ryan pointed a free before Sean O’Meara got his first point of the day for Grangemockler/Ballyneale.
Dara Ryan and Darragh Shelly exchanged further points from play before Rovers edged ahead with points from play from Dara Ryan and sub Dean English to give them a vital edge.
Darragh Shelly hit back with a point from a free but Rovers sealed the victory with a point by Luke Fogarty and another from a free by Dara Ryan in time added on.
Dara Ryan was outstanding for Rovers and was closely followed by Stephen Quirke, Luke Fogarty and Morgan Irwin.
Darragh Shelly stood out for Grangermockler/Ballyneale, who also had fine performances from Ben Comerford, John Lyons and Mikie Lyons.
Moyle Rovers captain Morgan Irwin received the South Cup from chairman Seamus Mullins while the man of the match award was presented to Dara Ryan by John Quirke of John Quirke Jewellers.
Moyle Rovers: Luke Delahunty, Shane Luttrell, Paddy Morrissey, Danny Lyne, Cillian Crowe, Morgan Irwin 0-1 free, Luke Fogarty 0-1, Kevin Grace, Barry McKeown, Luke Boland, Cathal McKeown, Anthony Phelan 0-2, Dara Ryan 0-13 (11 frees), Craig Condon 0-1, Stephen Quirke 0-5 (1 free).
Subs: Nathan Croke for Kevin Grace, Shane Ryan for Cathal McKeown, Daire Luttrell for Barry McKeown, Dean English for Craig Condon.
Grangemockler/Ballyneale: David Power, James Daly, Michael Meaney, Darragh Lambe, Sean Daly, Enda Fogarty, Leon Kennedy, Darragh Shelly 0-11 (10 frees), Conor Hahessy, Ben Comerford, John Lyons 0-3, Mark O’Meara 1-0, Sean O’Meara 0-1, Mikie Lyons 1-0, Jamie Walsh 0-1.
Sub: Luke Maguire for Conor Hahessy.
Referee: Noel Cosgrave (Marlfield).