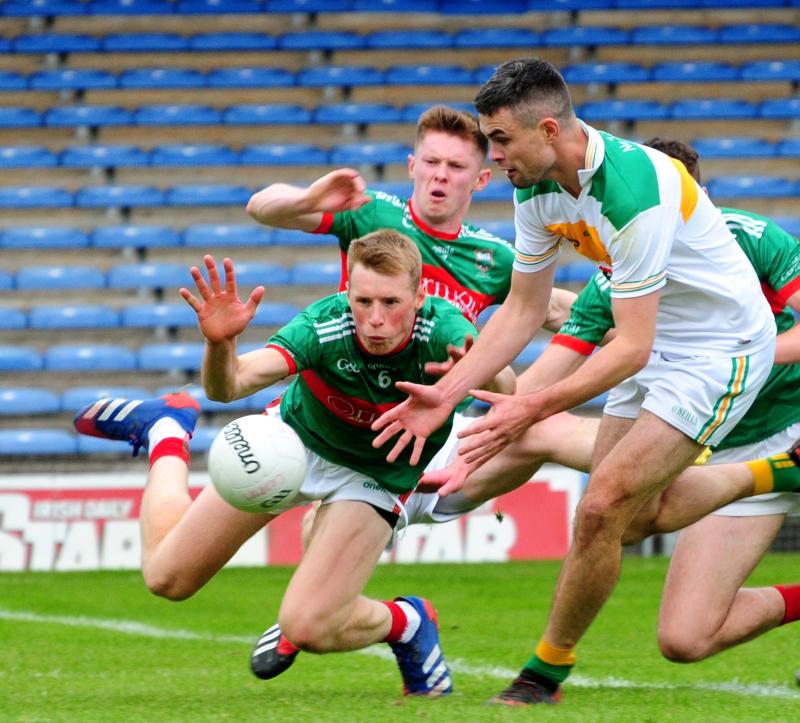 Loughmore's Brian McGrath and Clonmel Commercials' Michael Quinlivan in action. Both teams are expected to come through their respective quarter-finals at Leahy Park in Cashel on Saturday afternoon.

With the group stages of the County Senior Football championship all long decided, the action now turns to the business end of the championship this weekend with all four quarter-finals down for decision, three going ahead on Saturday and the fourth on Sunday afternoon.

The Tom Cusack Cup, introduced for the first time last year is also down to the quarter-final stages, while the last eight in the Intermediate championship are also in action vying for semi-final spots and the hope of gaining senior status at the end of the season.

CLONMEL COMMERCIALS V ARRAVALE ROVERS
Whenever football followers in the county stop to discuss this year’s championship the question most ask “Is there anyone capable of beating Commercials this year?” For the most part the answer is a simple and straight-forward “No.”

Denied a three-in-a-row of titles last November by an injury time goal by Loughmore’s John McGrath, Clonmel Commercials are in a hurry it seems to get back to a final and erase that bitter memory. Moments away from their first three-on-the-trot since the 1960s, the Clonmel side were cruelly denied their place in club history and now have a point to prove once again.

Under new management this year, Kerryman Robbie O’Dwyer has taken the reins and they breezed through their three Group 1 games against Killenaule, Upperchurch and Cahir. Their opponents in the first of a Leahy Park double bill on Saturday next are Arravale Rovers who came through Group 4 as runners-up to JK Brackens. Anything other than a win for the 19-times champions would be a huge upset. Throw-in is at 3 pm.

LOUGHMORE/CASTLEINEY V KILSHEELAN/KILCASH
The second game in the Cashel double bill pits reigning champions Loughmore/Castleiney against Kilsheelan at 5 pm. Comfortably the Mid men went through their group stages with a 100% record while Kilsheelan were anything but impressive, well beaten in their opener by Moyle Rovers and fortunate enough to overcome Rockwell Rovers in a do-or-die game in the third round of matches.

The Suirsiders can be a very capable unit when they hit top form and if they could get to that level on Saturday there is plenty of talent in their ranks to bother the champions. The early stages of this encounter will be crucial. Should Kilsheelan find that intensity early to match the vastly experienced Loughmore, who seemingly have it in their DNA to come good at this time of year, perennially, one never knows.

Loughmore should be good enough to progress to the last four.

JK BRACKENS V UPPERCHURCH/DROMBANE
The hardest of the weekend senior games to call is the all Mid meeting in Holycross between JK Brackens and Upperchurch/Drombane, two teams who by chance are also drawn to meet at the same stage the following weekend in the Dan Breen Cup. Brackens emerged from Group 4 as table toppers, labouring wins against Arravale Rovers and Ballyporeen followed by a concession by Eire Og in the final round.

Their neighbours over the road, Upperchurch, lost out to Commercials but recorded wins over Cahir and a do-or-die final day triumph over Killenaule, which eliminated The Robins. Hard to know but certainly JK Brackens would be the more disappointed to lose.

MOYLE ROVERS V ARDFINNAN
Sunday’s only quarter-final brings Moyle Rovers and Ardfinnan in to Clonmel. John McGrath has taken over as manager from John Owens this year and the Monroe side have done all that was asked of them, not a whole lot really, in progressing to this stage, with two wins and a walk-over from Drom.

Ardfinnan, under Tom McGlinchey, stuttered through their group, losing to Loughmore, drawing with an out-of-sorts Aherlow and with just one win under their belts against Moycarkey/Borris. Again it would be a major shock if Rovers are not in the hat for the semi-finals.