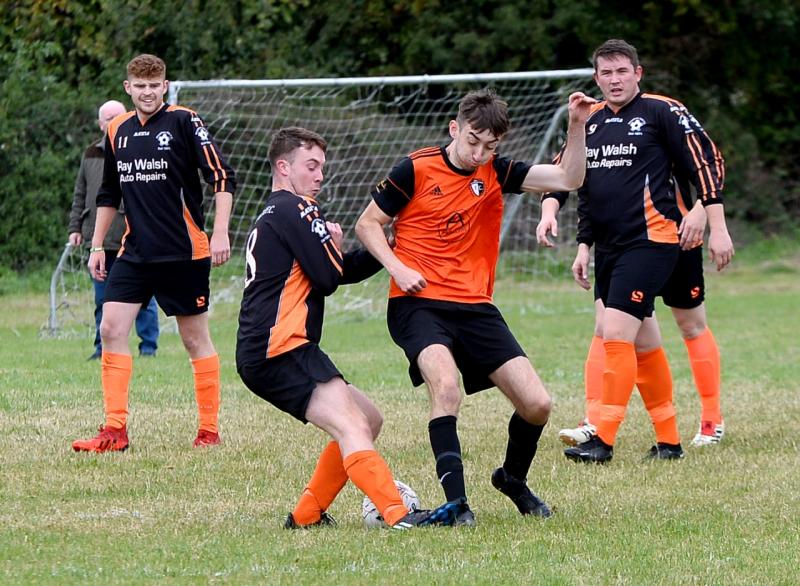 These two sides played out a very entertaining draw in Newhill Park on Sunday when the home side rescued a deserved draw against a Clonmel Celtic side who are enjoying some good results on their return to the Premier League this season.

The visitors were coming off a big win in their last league game (5-0 away to Wilderness Rovers), and started off again on the front foot, catching the home defence cold after only five minutes and setting up Mark Heffernan to fire to the net from close range.

However, the home side took control of the game afterwards and forced the Clonmel side back on numerous occasions, but were unable to press the possession home, with no more goals scored in the first half.

The second half started in a similar fashion with Borris coming out all guns blazing, and they finally brought the game level in the 65th minute when Dylan Lee headed home from close range to the delight of the home fans.

But ten minutes later, as they went looking for the lead goal they got caught on the break, and after a catastrophic defensive mix up, Rory O’Dowd was left all alone to tap in from less than five yards and restore Celtic’s lead.

Celtic then fell back and invited the home side to try to break them down, and it looked like this tactic would yield the points, but in the final minute of the game, a Martin Darmody free kick landed on the head of Urban Nolan and he found the net with an excellent equaliser that ensured Borris would get at least a point from the game.

Peake Villa, who contested the top end of the Premier League table for much of last season, look like they will be a similar proposition this year, with a very clinical and controlled performance in taking all three points at Bansha on Sunday.

The visitors here started well having the majority of possession without creating anything of note in the early stages, before from nowhere, a piece of individual brilliance by Pippy Carroll put his side ahead, after he volleyed home from all of 30 yards out.

Bansha had a decent chance to level things up shortly afterwards, but were wasteful in delaying their effort, allowing the Peake defence to get back and clear. And that proved crucial when ten minutes from the break, Villa doubled their lead through a second by Carroll, this time a tap-in when the home keeper was unable to hold onto an earlier shot.

The second half was a more even affair with both sides battling hard, and again the home side were desperately unlucky not to pull a goal back when they saw a Tony Egan effort come back off the crossbar from an excellently hit free kick.

But Peake Villa made absolutely sure there would be no revival inside when they tacked on a third goal after Ronan McGuire finished well from a cut back ball inside the last five minutes.

Wilderness Rovers finally picked up a win at the fifth time of asking on their Premier League return with a good win in Clogheen at Vee Rovers, who are facing a long season battling relegation, as they struggle with a weakened side this campaign.

The game itself was a good one with both teams having chances before the visitors opened the scoring just after the half hour mark after good work through the middle found Killian Hogan in space, and he made no mistake firing past the stranded Vee keeper.

The Clonmel side added a second five minutes before the break when Dean McLoughlin scored sending his side to half-time 2-0 to the good.

The hosts pulled a goal back five minutes into the second period thanks to an excellent header by Thomas Quirke from a corner kick, but in their pressure to try to get an equaliser, they were caught on the break and Jack Landy restored the visitors two goal lead, just after the hour mark.

Twenty minutes from the end the home side were awarded a penalty and Quirke added his second from the spot.

But the Wildies were not going to be denied the points and Sean Brown made sure of that elusive first win of the season when he scored in time added-on to add the fourth and insurance goal for his side.

St Michael’s took a long time to wear down a resolute Cashel Town rearguard action but finished the game strongly to take the points at Cooke Park, on Sunday afternoon and maintain their 100% start to the season.

They were unlucky not to score early when Paul Breen fired an effort over the bar from close in, but this was a harbinger of things to come as they saw themselves frustrated time and again in the half.
They reshuffled their pack in the second period and again laid siege to the visitors goal, but it took them until the 71st minute to finally break the Cashel defence down, when Rhys Byron got a flick on a Kenny Cunningham cross, and saw the ball fly to the back of the net.

That said, they still had to wait until the final moments to finally kill off the Cashel challenge when Paul Breen made up for his early miss, with a late goal, as he too took advantage of a Cunningham cross to find the net.

Two goals, three points, but the Saints will have to be a lot more clinical as the season progresses.