Nenagh peacemaker Fr Alec Reid is recalled as a priest, a Christian and a Tipperary man 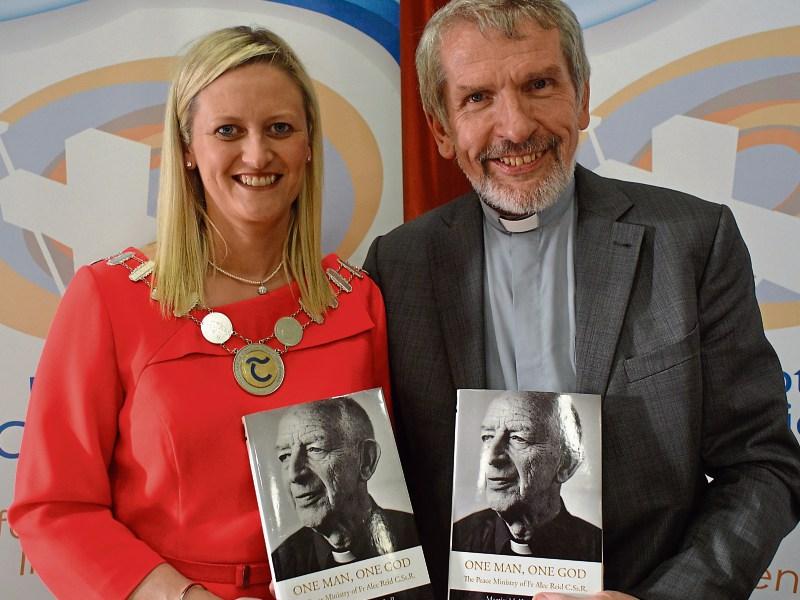 Tributes were paid to renowned Nenagh man and peacemaker Fr Alec Reid at the launch in the town of a new book dealing with his life and times.

Fr Reid, who died in 2013, was one of the main negotiators in the IRA ceasefire, ending decades of conflict in Northern Ireland.

However, the Redemptorist priest, who spent most of his ministry in Clonard in Belfast, was remembered as a Christian and a priest, but, above all, a Tipperary man, at the launch in Nenagh Arts Centre.

The book, One Man, One God, The Peace Ministry of Fr Alec Reid, by Martin McKeever, CSsR, was launched by Rev Harold Good, the Methodist minister who oversaw the decommissioning of IRA arms with Fr Alec.

It was launched in the presence of members of his family, including his sister Maire, cousin Mary and extended family.

“He spoke so often of his Nenagh family,” said Rev Good, who recalled that his own relationship with Fr Alec came from a different direction.

“We came from two different traditions but he took delight in what we had in common,” he said.

“We shared the same humour, banter, our faith, our understanding of the Gospel that, sadly, many in our churches don't. We also shared our travels, and he said his best loved journey was the journey of decommissioning,” said Rev Good.

He said the most important thing about Fr McKeever's book was that it was a remembrance of a prophetic ministry and a practical record of somebody central to the story of peace. It was also a template for those places where conflict still existed.

Author Fr McKeever described One Man, One God as “not a biography and not a history of the Troubles, though both are in there”.

He said if we wanted to understand Fr Alec, we must look at him as a priest, a Christian and a Redemptorist.

He described Fr Alec as a man to whom God had given a tremendous gift.

Former Fianna Fail Tipperay South TD Martin Mansergh, who was also involved in the peace negotiations, said that the history and traditions of Tipperary, especially the republican ones, had had a strong influence on Fr Alec.

“He had a strong moral sense that the Church should do something and he had the satisfaction of seeing real results,” he said.

“I think we should be proud of him and celebrate his contribution,” he said.

Earlier, Cllr Siobhan Ambrose, Cathaoirleach of Tipperary County Council, said it was a tribute to Fr Alec that the book was being launched in Nenagh. It also had a launch in Belfast.

“He was a Nenagh man and a man of many accolades who was very unassuming and didn't shout about the wonderful work he carried out,” she said.

Cllr Ambrose said Fr Alec would have been very proud last January when Tipperary and Antrim GAA came together to play a match.

One Man, One God, The Peace Ministry of Fr Alec Reid CSsR, by Martin McKeever, is published by Redemptorist Communications and costs €14.95.