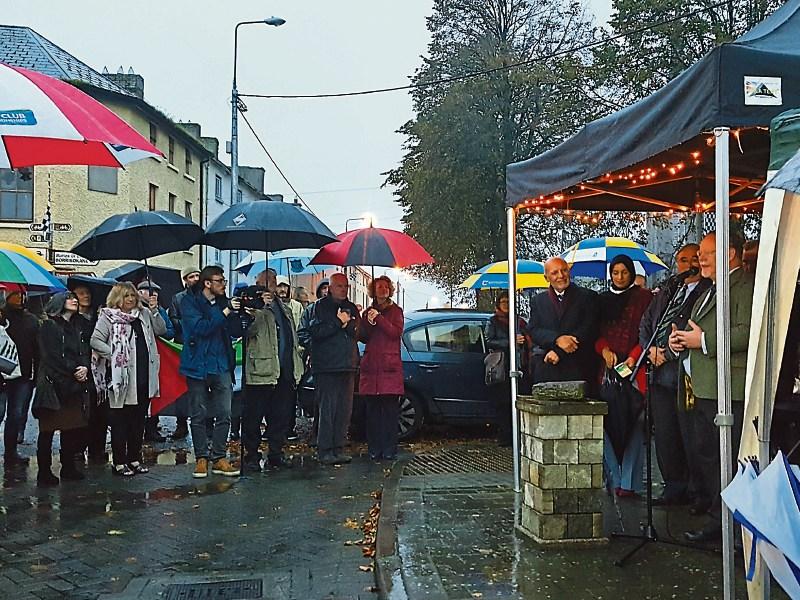 Some of the participants in the ceremony in Cloughjordan

Despite the weather, there a great turnout for a very special community gathering on Cloughjordan's Main Street last Thursday which celebrated the historical links between the village and the Kingdom of Jordan.

To mark this connection, a stone was sourced from the Jordan River at the baptismal place of Christ, Al-Maghtas, more commonly known as Bethany Beyond The Jordan and the focus of the celebrations was the presenting of The Stone of Jordan to the community as a gift of friendship from the Jordanian government and people.

“The idea of re-establishing the 800-year-old connection between Cloughjordan and Jordan was fascinating and irresistible when I first heard about it from Gearoid O’Foighil in the Cloughjordan Community Development Committee,” said honary consul Joe Geoghan.

“The opportunity to play a small role in making this happen was an honour and one of the most rewarding things I have been involved in while representing Jordan in Ireland for the past 16 years,” he said.

Mr Geoghegan said that he saw the event as the first step in a journey with many possibilities to be developed one by one in the future.

There were already some great suggestions being considered and he had no doubt that the enthusiastic spirit of the people of Cloughjordan shown so far will ensure that they will become a reality as we go along.

“It will be my pleasure to continue to give support in every way I can,” he said.

Honorary consul Ramsey Khoury, representing the Jordan Government, spoke of the similarities between the Irish and Jordanian people, their natural warmth and welcoming attitudes.

He spoke of the excitment in Jordanian circles about the Cloughjordan connection and the positive message it sent out about the creating of new and positive connections between far away peoples and cultures.

Following the event he was presented with a hurley and sliothar by John Casey on behalf of Kilruane MacDonaghs GAA Club.

On behalf of the community, Rev Shannon DeLaureal, Fr Pat Greed and Rev Terry Mitchel accepted the presentation of the stone by Mr Khoury and offered a blessing for the future.

Earlier in the afternoon, the visiting dignitaries attended a meal in the Middle Country Cafe with representatives of local community groups, including Tidy Towns and Cloughjordan Heritage Group and afterwards received a tour of the exhibits at the Thomas MacDonagh Museum with Paddy Williams and May and Jim Casey.

Following the presentation, Cloughjordan House hosted an event at which there was a further presentation on the history of Irish-Jordanain connections.

Cloughjordan Development Committee thanked all those who played a part in making the evening a special truly event.