Tipp for Choice has strong presence at march 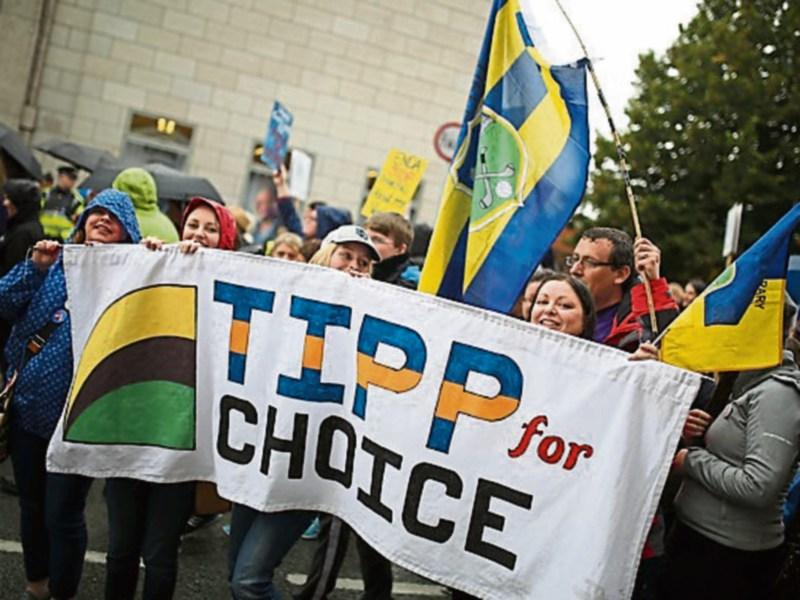 Despite the heavy rain, Tipp for Choice had a far higher turnout than was expected at the 5th Annual ARC March For Choice.

Tipperary people of all ages and backgrounds travelled to Dublin from Nenagh, Cashel, Clonmel, Thurles, Templetouhy, Two-Mile-Borris, Birdhill and other towns and villages around the county to show solidarity with the national campaign for abortion rights.

Turnout at the march itself was estimated at well over 20,000 and we were delighted to meet up with other Tipperary people who were there marching with other groups. Our group featured in national and international media coverage and had the opportunity to network with similar organisations from across the country.

The theme of this year’s march was ‘Rise and Repeal’. The 1916 Proclamation of Independence held central the promise of equality. The leaders of the Rising sought sovereignty over our own country. Now, 100 years later, prochoice groups are rising in the same spirit to challenge the suffering that women face under the Eighth Amendment and claim sovereignty over our own bodies. Tipp for Choice is rising in solidarity with the 70 Tipperary girls and women who were forced to travel last year alone to access abortion care in the UK.

Tipp for Choice committee member Anita Byrne explained why she was marching: “I remember the referendum in 1983 and even then as a young teenager I was aware of the implications for me as a woman in Ireland. More than 30 years on and things haven’t changed”.

“I’m marching to raise awareness that the 8th Amendment not only makes abortion illegal in Ireland, it also takes away a woman’s right to medical consent during the entirety of her pregnancy”.

“I’m also marching to show my solidarity for the 10 women a day who are forced to access basic maternity healthcare in a different country due to our archaic laws. These laws equate the rights of me, a fully sentient adult, with those of a zygote”.

Tipp for Choice will continue its work in the months ahead. Anyone who would like to get involved can email us at tippforchoice@gmail.com, or find us on twitter or Facebook.