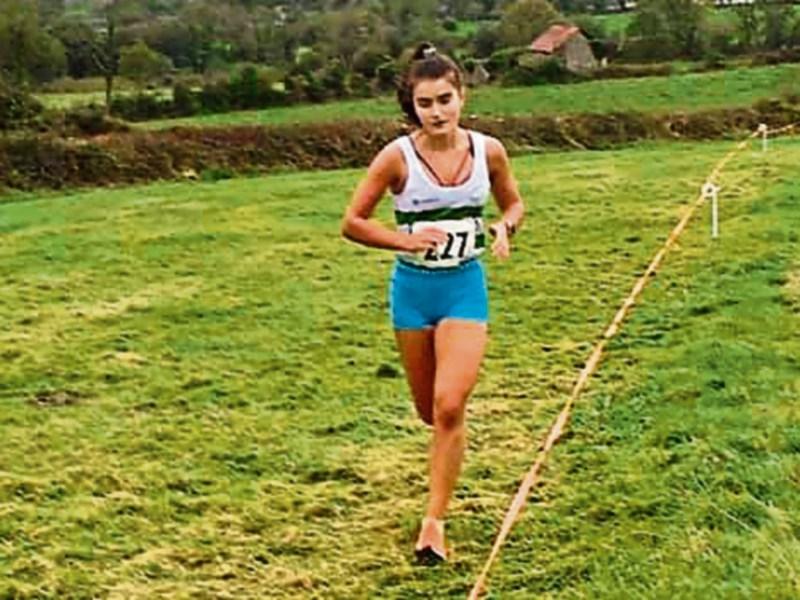 Ciara O'Neill, Clonmel AC, on her way to victory in the County Novice Cross Country on Sunday last.

The County Tipperary Cross Country Championships took place last Sunday in Newport. Great credit to Newport AC for having everything spot on, in these unusual times, for the promotion of these Championships, a much-needed boost for the sport in the county. We were treated to two very good competitive races.

Athletes had to contend with strong winds at times accompanied with light rain while the terrain was relatively firm.

In the women’s race over 4k, Ciara O Neill of Clonmel set a strong pace right from the start that soon saw her go into a commanding lead after 1K. She maintained that strong tempo all the way to come home a very worthy and convincing Champion, brilliant piece of front running. Then we had a battle early in the race with three athletes in contention for the minor placings and they were Sharon Cantwell of Moyne, Courtney McGuire of Clonmel and Evelyn Maher of Templemore. Midway through the race Courtney and Evelyn went clear and these two athletes matched stride to stride for the next 3k.

Then going out on the final lap Courtney increased the pace that soon saw her draw clear and she held that strong pace all the way to win the Silver medal. Then we had Evelyn Maher of Templemore running well when finishing 3rd to win the Bronze medal. For the record Suzanne Shine of Clonmel was 4th, Sharon Cantwell of Moyne was 5th with Sinead Tynan of Moyne 6th.

In the team event with three athletes in the top 4, Clonmel were convincing winners on7 points with their team of Ciara, Courtney and Suzanne. The Inter Club Silver medals were won by the Moyne team of Sharon, Cantwell 5th, Sinead Tynan 6th and Aisling Maher 8th on 19 points. The Inter Club Bronze medals were won by the Clonmel B team of Sareen Walsh 7th, Anne Marie Halpin 9th and Stephanie Byrne 12th on 28 points with Mooreabbey Milers 4th and Dundrum 5th.

In the Men’s race we had athletes from 7 clubs competing and it was great to see some new faces tackling Cross Country for the first time. The race started and after the initial charge, Paul Minogue of Clonmel took up the pace and set a strong one that had the whole field spreadeagled approaching the 500m mark. Hot on his heels was Shane Kenny of Moyne and Eamon Morrissey of Dundrum leading the chasing pack that also included Barry Hartnett of Mooreabbey Milers and Colm Bradshaw of Dundrum. Eamon Morrissey gradually reeled in Shane and set his sights on Paul as they went out on the 1st big lap of 5. Going out on the 2nd big lap both these athletes shared the lead.

Then midway though that lap, Eamon took up the running and going clear as they went out with 3 laps to go. Eamon held that lead all the way to the line to come home a very worthy Champion, pacing himself well throughout the race. Then we had Paul Minogue of Clonmel winning the Silver medal with Barry Hartnett of Mooreabbey Milers winning the Bronze medal. For the record Kieran Lees of Mooreabbey Milers was 4th, Dermot Hayes of Dundrum was 5th with Colm Bradshaw of Dundrum 6th.

In the team event Dundrum were victorious in defending their title won in Newport last year. Their scoring four were Eamon Morrissey 1st, Dermot Hayes 5th, Colm Bradshaw 6th and Michael J Ryan 13th on 25 points. The Silver team medals were won by the Mooreabbey Milers team of Barry Hartnett 3rd, Kieran Lees 4th, Ewan Cunningham and Willie O[Donoghue 18th on 35 points. The Bronze team medals were won by the Clonmel quartet of Paul Minogue 2nd, Nigel O'Flaherty 11th, Conor Fleming 14th and Jamie Byrne 22nd on 49 points. For the record Moyne were 4th on 69 points, Templemore were 5th on 76 points, Mooreabbey Milers B were 6th on 90 points with Dundrum B 7th on 107 points.