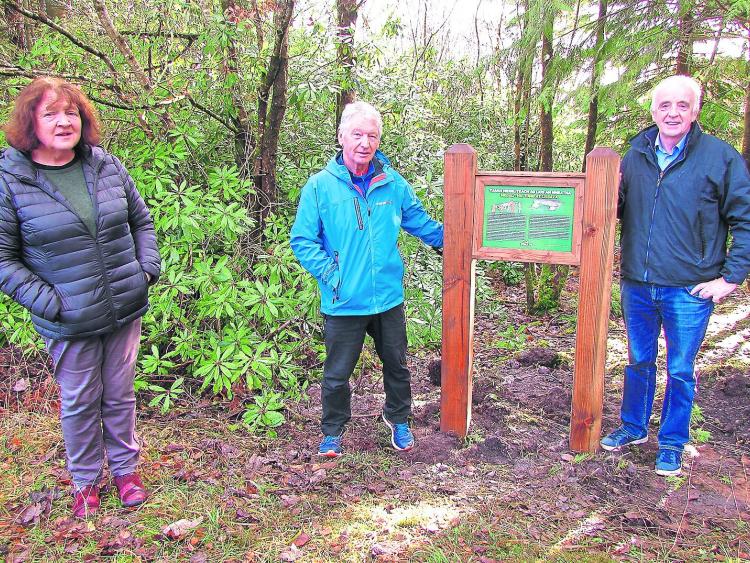 On a magnificent Sunday morning, Anthony O’Brien and John O’Reilly of Cahir Looped Walks jointly launched an Information Board for Lissava Megalithic Tomb in Scaragh Wood. This structure is almost 6,000-years-old and is so worth a visit.
Cahir Looped Walks would like to thank Coillte and Cahir Social and Historical Society for their ongoing support for this project and also Dr Rose Cleary who was responsible for the Board’s text and illustration (with the assistance of Sue Bickley).
Finally, this project would not have been possible without grant-aid from Tipperary County Council’s Community Enhancement Programme.
The text from the information sign at the Megalithic Tomb at Lissava reads as follows:
The tomb is located on the south-facing slope at the east end of the Galty Mountains. The massive capstone (almost 3 metres in extend) resting on an upright stone at an entrance facing towards the south-west and sitting on a hillslope all suggest that the megalith can be identified as a portal tomb.
The Neolithic people who built these tombs were the first farmers in Ireland and cultivated the landscape to manage their food supply. These first farmers came from Britain and perhaps mainland Europe and accessed inland areas like Cahir via the river network, such as the River Suir. There is a cluster of portal tombs in Waterford, Kilkenny and Carlow and this one at Lissava is an outlier. While the site is called a “tomb”, it is likely these places were focal points within communities of Neolithic people where rituals, including burial, took place and perhaps the megalith also defined the territory of a community. The tombs were built around 3,900 BC and most continued to be used for several hundred years as places linking communities to their ancestral past and to the spirit world. Stones scattered around the tomb may be the remains of a cairn which defined the perimeter.