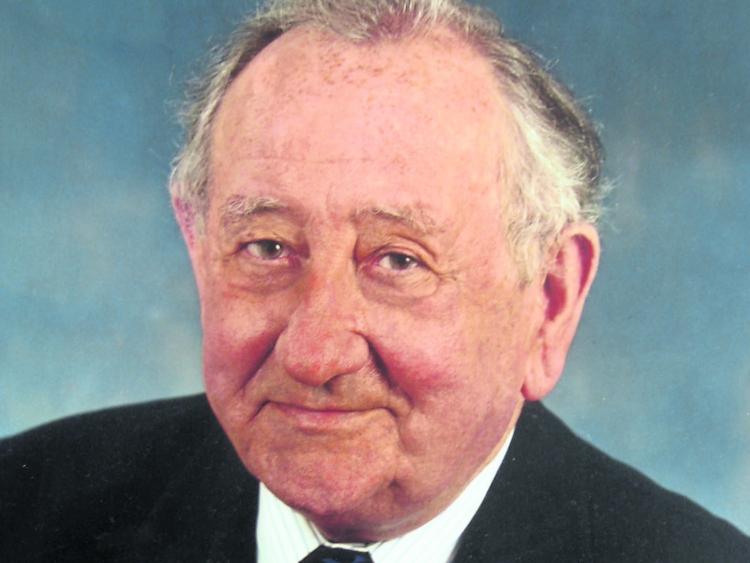 He was born in 1925 and his early years were permeated by the aftermath of the Civil War when a new Ireland was being shaped.

Eamonn was a born raconteur and had a store of revealing anecdotes which enliven the narrative of Memoirs.

For example, he remembered as a child seeing Lord and Lady Dunalley of Kilboy House at a hurling match in Silvermines perched on shooting sticks. The presence of the gentry, much reduced in acreage after the Land Acts, more than the match, remained a talking point for months after.

Eamonn’s adult life began when he was enrolled in St. Flannan’s College, Ennis, as a boarder for £40 fee ‘all found’, for his secondary education in 1937. The fact that much of North Tipperary was in the diocese of Killaloe had a major influence on Eamonn’s subsequent life, turning him towards Co. Clare rather than Tipperary. Flannan’s was a tough academy during the war years characterised by meagre rations and strict discipline.

But the hurling was a great distraction.

It could be dangerous though mixing the Clare and Tipperary styles and in his first weeks Eamonn was knocked unconscious by a blow of a hurley. He received the last rites but rallied to hurl again with both St Flannan’s and Silvermines.

A bright scholar, Eamon secured scholarships on the basis of his Intermediate and Leaving Certificate results. As secondary school days came to a close, Eamonn had to think about his future. Priests like hurlers and revolutionaries were recruited from particular families of social standing.

The fact that he was much influenced by Fr. Pat Gaynor his step-uncle, obviously played a key role in his decision.

He entered Maynooth to train as a prospective priest for the diocese of Killaloe. Eamonn survived Maynooth but found it a rather dull place which valued conformity above an enquiring mind.

Eamon was ordained to the priesthood on June 19, 1949 by John Charles McQuaid, Archbishop of Dublin, and one of the most controversial and influential clerics of the twentieth century.

Because Killaloe diocese had a surplus of priests, Eamonn was posted to the diocese of Brentwood in the East End of London from 1949 to 1953. His parish at Ilford embraced the middle-class, the Ford plant at Dagenham, which had many Cork immigrants, and the dockland of Canning Town.

These diverse populations and places were to shape Eamonn’s ministry. His book has great descriptions of bomb-damaged London and it was only then he realised the enormous carnage visited by the Second World War on England.

Eamonn bought a bicycle and got to know London. He regularly attended Shakespearean plays, visited the British Museum and the National Gallery. He seeped in the local culture wherever he found himself and London had it all.

Canon Hamilton had heard that Fr. Pat had left some historical works and told Eamonn that the bishop wished to see them. But Eamonn was obliged by Fr. Pat’s will not to release the documents to anyone until thirty years had passed. The canon was not impressed and rebuffing the canon was to have serious long-term repercussions.

Shortly after the funeral he received notification that he had been appointed to the staff of St. Flannan’s College, which pleased Eamonn, and his parents even more so.

But shortly after the appointment was made it was as quickly rescinded and he was ordered to remain in London. It was not until 1953 that he was recalled to Killaloe and posted to Cranny in south Clare.

Cranny, according to Eamonn, was a rural backwater reserved for recalcitrant priests. One can see him in the Austin A40 bequeathed to him by Fr. Pat making his way to his new parish. There was no electricity, his house was lit by a paraffin lamp but he was amply supplied with turf for his firing. As soon as his parishioners got to know him he had copious supplies of meat and vegetables.

This was de Valera’s frugal Ireland, but Eamonn, as he was to do throughout his life, met the challenge positively.

He set up a committee to campaign for improvements to the road system and organised a drama group. When Bishop Rodgers succeeded Michael Fogarty as Bishop of Killaloe, Eamonn was asked to serve on what was known as the Emigrant’s Mission.

This was an initiative by the Irish bishops to allocate clergy to the ever increasing Irish populations of post-war England.
Eamon was posted to a place called High Marnham on the borders of Nottinghamshire and Lincolnshire on the banks of the River Trent.

Here the largest power station in Europe was under construction and some two thousand Irish, mainly single young men, were employed there. Eamon was tasked with organising a parish for this footloose population who lived in specially constructed worker’s camps.

This section of his memoir, covering the years 1955 to 1958, should be required reading for students of Irish history as it reveals the failure of the Irish state not only to provide employment, but also to educate its people for emigration. Despite the poor working conditions, the extraordinary thing Eamonn discovered was that the Irish workers on the site were totally opposed to forming trade unions which might help negotiate for better conditions.

Trade unions to them were associated with Dublin and restrictive practices. Many of the mostly rural Irish workforce had jobs as carpenters and electricians, which under trade union rules would be reserved for individuals who had served an apprenticeship.

In 1958 he was appointed to a curacy in the parish of Kilmaley under Mount Callan in West Clare. He spent some five years here and organised the refurbishment of the church in Connolly as well as developing his communication skills.

He became a regular contributor to Recollections a late-night programme on RTE devoted to spiritual matters and published a pamphlet the Shamrock Express, which gave practical advice to prospective emigrants.

He also wrote for the Furrow, a journal published by Maynooth College since 1950, and was one of its trustees.

Then began the most satisfying and controversial period of his priestly ministry. In 1963 he was appointed as priest in charge of Shannon New Town which was in the process of development. Eamonn responded to his new challenge with characteristic gusto.

He established a parish council, organised joint-prayer meetings with the small Protestant community, introduced the vernacular liturgy, and did everything possible to put the teachings of Vatican Two Council, into practise. In a new town where most of the population were young married couples, Eamonn had a tolerant attitude towards contraception.

But despite the winds of change blowing through the Catholic Church, there were conservative clerical elements, reinforced by Opus Dei, the Knights of Columbanus, the Knights of Malta (not as Eamonn explains the benign paramedics of that name), who deplored the new order.

Two taboo-issues were ecumenism and the availability of contraception.

The conservative element was bolstered by the encyclical Humanae Vitae issued by Pope Pius in 1967 which forbade artificial contraception.

In the same year, Michael Harty, Eamonn’s fellow-countyman and classmate at Maynooth, was appointed bishop of Killaloe. No doubt to rein in Eamonn’s alleged liberalism, a senior priest was soon appointed to Shannon. Inadvertently, the letter from the Knights of Columbanus welcoming Eamonn’s new superior was addressed to Eamonn himself!

In 1969, Eamonn was appointed to Quin parish in East Clare and was to spend seven years there. While in Quin, he devoted himself to building a new church at Clooney (mentioned in the ballad Spancil Hill) which was dedicated to Pope John 23rd, whom Eamonn greatly admired. The old church dated to 1820 and Eamonn was very pleased that in its wall was found a chalice presented to a yet older church by Eleanor Gaynor in 1725.

In 2018 the church was rededicated to St. John 23rd on his canonisation. Writing to invite Eamonn to the rededication, Fr. Tom O’Gorman told him that: ‘The people in the area still speak highly of you and remember you fondly and how much you did’. Eamonn was unable to travel and asked his cousin Len Gaynor to represent him.

The late Brendan Ó Cathaoir remarked in his review of Eamonn’s book in the Irish Times (February 23, 2004) that, after Eamonn’s request to act as chaplain to the Traveller Community was turned down, ‘he went, literally, to the dogs’ and began rearing greyhounds. Once mature the pups were transferred to famed Tipperary trainer Ger McKenna. Eamonn’s dogs enjoyed some success, which as a priest he couldn’t be associated publicly with.

Eamonn Gaynor resigned from the active ministry in 1977 and began a new phase of his life. Unable to find a teaching position in Ireland he took the emigrant route again and spent three happy years as a teacher of religious and social studies at Rede Secondary School near Rochester in Kent.

In 1980 he married Tessa Neville, a native of Clonakilty, who was working as a psychiatrist in England. They decided to return to Ireland for family reasons, and following three years based in Enniscorthy, spent the next twenty years in Clonmel, where Tessa was employed as a Consultant Psychiatrist.

Eamonn initially worked as supervisor of the Census in Wexford and subsequently did voluntary work with Meals on Wheels in Clonmel, having become a member of the Probus organisation. His book was published in 2003.

Throughout this period, he helped to care for Tessa’s elderly parents.

Eamonn and Tessa retired to West Cork in 2003, spending many happy years together until Eamonn’s illness and death on September 23, 2019.