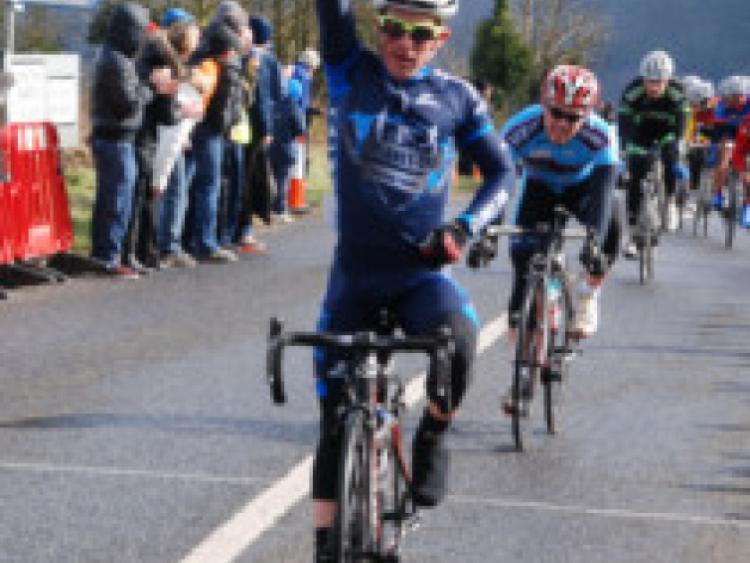 The event which dates back to 1955, was kindly sponsored by Thompson Funeral Directors Waterford for a fourth successive year and involved three races for the various categories.

The first victory of the day went to Clonmel man Barry Meehan. Meehan, who is the owner of Clonmel’s popular cycling store Worldwide Cycles, used his strength to power his way up the hill, demolishing the opposition and crossing the line with both arms raised to celebrate in style and win the ‘C Race’.

There were also some locals among the prizes of this first event, with the Carrickbeg duo of Conor Hennebry and Paul Bourke rounding up the prizes in 7th and 8th respectively.

The next race to finish was the main event and the prize of the Carrick Wheelers Cup had once again attracted some of the top riders in the country to compete. This race was very much a tactical affair, with several groups and splits forming throughout the race.

However, on the last lap it was still largely together and as they approached the town for the final time it was still all to play for. First man up Sir John’s Hill was Paudi O’Brien or ‘The Banteer Bullet’ as he was once christened locally by the former Carrick Wheelers Chairman, the late Bobby Power.

The Corkman was a very popular winner of the event and it seems fitting that a rider of his calibre should have his name added to the impressive fifty-eight year winner’s list.

There was again some success for the promoting club in the main event as Michael Lucy claimed the final podium spot, finishing in 3rd place, with Martin Mizgajski also of Iverk Produce Carrick Wheelers claiming the final prize on offer coming home in 8th position.

The final winner of the day came from a new team set up for 2013, as Dylan Foley of the Nicholas Roche Performance Team soloed to a great victory in the ‘B Race’. The team which Nicholas Roche founded, has been set up to help develop Irish junior (U18) cyclists and continue Ireland’s rich tradition of producing world class cyclists.

Foley totally dominated this event and soloed to an excellent win, coming home almost a minute clear of the rest of the field.

Iverk Produce Carrick Wheelers were again among the prizes in this event as Eoin Green rode an excellent race to make the podium, finishing in 3rd place.

So a great day’s racing for all involved, and Iverk Produce Carrick Wheelers would like to thank everyone who helped to make the day a success, especially Carrick United Soccer Club for the use of their premises, the local councils, the Gardaí and Civil Defence for their help in keeping the race safe for the cyclists. A special thank you to race sponsors Thomson Funeral Directors, who enabled the club to give prizes to the top eight in each race, and a final word of thanks to Paul Lonergan for leading the day’s events and continuing the great tradition of cycle racing in Carrick-on-Suir on St. Patrick’s Day.