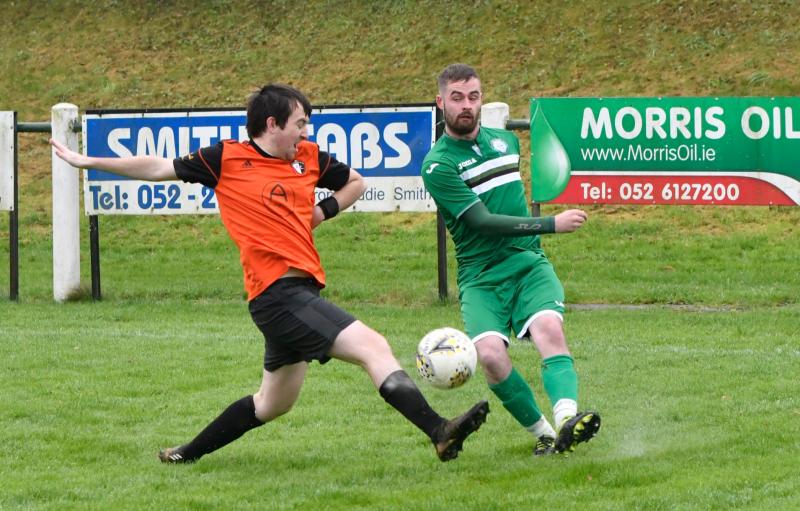 Tipperary Town 8 – 3 Mullinahone
It rained goals early last Sunday morning at the Arra Road in Tipperary Town, where a home side that has been having some very up and down results in recent times finally clicked into gear and blew away a Mullinahone team that has been having a very good season, albeit in a division below.
The home side got off to a flier with two early goals from Anthony Harding and Tony Byrnes, but the second tier side were a danger themselves and hit back from a corner through Johnny Lawlor.
That aside though, the rest of the half was one-way traffic, with a penalty goal from Marky Roche, a superb shot from Jordan Cummins and a second scored by Tony Byrnes giving the home side a 5-1 lead. A late effort by Wayne Lazlett reduced the deficit right on the stroke of half-time, but the home side must have been happy with their performance up to that.
They carried it on into the second period and by the midway point, a long-distance strike from Roche reinstated their four-goal lead, before a tap-in rounded off his hat-trick and extended it to five.
Wayne Lazlett then hit a stunning strike to beat Eric Higgins from all of 30 yards, to keep the tie interesting. But the hosts’ Aidan Duggan then showed an impressive turn of pace, getting in around the back of the visiting defence to set up Roche for his fourth and his side’s eighth goal to complete the win on the back of a strong performance.

Cullen Lattin 5 - 2 Clonmel Town
Cullen Lattin joined their west Tipperary neighbours in the second round of this year’s Paddy Purtill Cup with a good win over a strong, young Clonmel Town second side, who gave them plenty to think about before succumbing in the end.
The visitors started well and were unlucky not to go ahead in the fifth minute when they had a Johnny Dowley effort rattle the crossbar.
But once the home side settled they starting creating some clear cut chances, the first of which was converted in the 21 minute when Micheál Elligott played Timmy Heffernan in to finish well from a tight angle.
On the half-hour mark they almost doubled the lead but Danny O’Dwyer headed over from close range.
The visitors had chances of their own and nearly got back level five minutes before the break when the hosts failed to clear their lines and the ball fell kindly for Keenan Kerton, who was denied by an excellent double save from Josh Moloney.
Just a goal to the good at the break, the hosts upped the tempo and extended the lead eight minutes into the second period when a Mikey Stokes corner fell to Danny O’Dwyer on the edge of the box, and his shot curled into the top corner to make it 2-0.
The visitors didn’t throw in the towel, though, and on sixty five minutes Keenan Kerton crossed excellently from the right for Gino Lonergan to head home to bring the deficit back to a single goal.
But the home side got their two-goal cushion back seven minutes later when Darragh O’Brien did well to find Elligott, and he played in Russell Bowes to score.
The same player made it four 11 minutes from time when was the beneficiary of a setpiece movement that left him with just a tap-in.
But Town again fought back and a mistake in the Cullen defence allowed Kerton to capitalise and he finished well to set up a grandstand finish.
The hosts finished the stronger, however, and Elligott once again was the provider for Mikey Stokes to score near the end of the game to wrap up the victory.