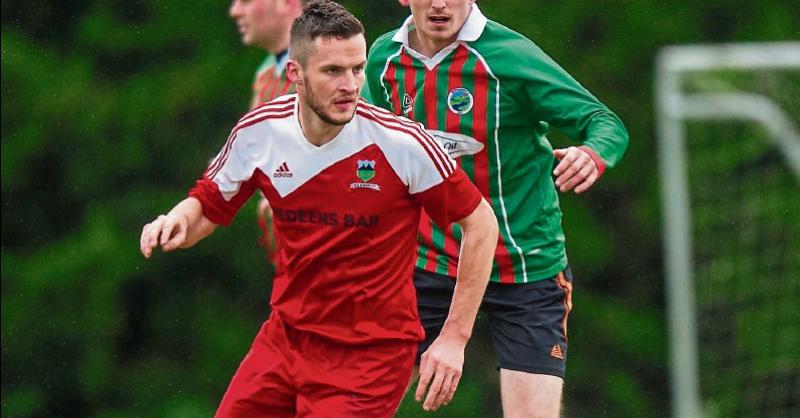 Alan Condon was on the mark for Clogheen side Vee Rovers at home to Two-Mile-Borris in the Premier League on Sunday last,

Vee Rovers 2 - 2 Two Mile Borris
Both sides were desperate to take the three points on offer here, and the home side will be disappointed that they gave up a two-goal lead in what turned out to be a feisty affair on a chilly afternoon in Clogheen.
The visitors started better, playing some good free flowing football, without really making any chances. The hosts eventually got to grips with the pace of the game however, and took the lead in the 21st minute when some excellent work through the middle saw the ball land at the feet of Jake Kiely and he made no mistake with his effort.
This seemed to knock back the visitors, as Rovers now took control and they were good value for their second goal just after the half- hour mark when Alan Condon headed home superbly to put his side in control.
Some astute tactical changes after that, though, saw the visitors wrest the initiative back and they delivered a telling blow in the final minute of the half when they pulled a goal back with a well-taken Martin Darmody strike.
The second period started as the first ended, with the visitors on the front foot and doing most of the pressing, but they were getting very little change from a very stubborn Vee defensive line. The home side were living on scraps for most of the half but it looked like they might have survived the onslaught, only for their resistance to break inside the final ten minutes when Micheál Foley managed to find some space in the Vee area and he made no mistake to level matters.
Both teams tried for the winner inside the last few minutes of the game, with the visitors coming closest to those elusive three points, only to be denied by a brilliant save from Rovers goalie Cormac Flynn.