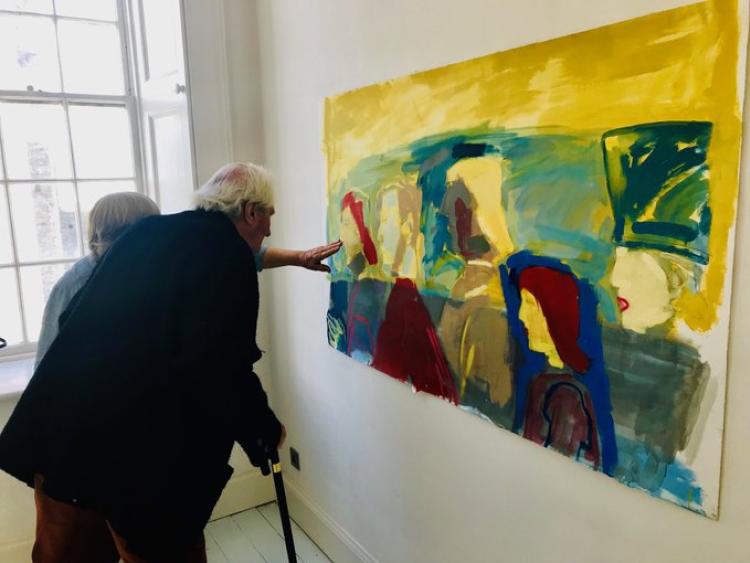 The current exhibition in Damer House Gallery, Roscrea is the work of two master printmakers; Alice Hanratty and Michael Kane, these two titans of Irish art have represented Ireland on the international stage since the 1970’s, writes Kate Walsh, of Nenagh.

As famous for their gloriously coloured paintings as well as their prints, the Gallery is showing a variety of their most recent works, which include some 3D pieces by Michael Kane. Their output is as prolific and vibrant as ever. The pieces on display are energetic, and expressive, at times poignant and occasionally mischievous. Each piece shows the mastery of their mediums.

Entering the gallery, three small Hanratty etchings ‘The Drowning Child’ are delicate, moving and tragic. Beside these etching is a woodcut by Kane and together they give a taste of what is to come. In the alcove hang three of Kane’s woodcuts – one entitled The Sculptor in front of which is one of Kane’s sculptures of a head. This playful juxtaposition of print and sculpture work very well together and shows an artist completely in control of his chosen mediums.

Kane’s woodcuts are all older plates which he has reworked. He has said that he realised, “that the practice of any art was a perpetual apprenticeship to the masters who had gone before and an acknowledgment of the richness of the movements, “spiritual”, artistic, political and philosophical”. He started these pieces, originally using old pieces of furniture from his garage. His exploration of line and colour in the works on display shows Kane’s technical brilliance as a printmaker and his widely acknowledged ability as a painter.

Alice Hanratty has both paintings and etchings on display. Gallery 2 is dedicated to her paintings based on Italian Renaissance artist Gentile Bellini's Procession in St. Mark's Square (1496) which she saw in the Gallerie dell'Accademia in Venice. While the piece is evidently a procession, the pieces are hung individually (rather than as a connecting frieze) and this forces the viewer to confront the work in a different way – who are these people and what are they doing? These arresting paintings display Hanratty’s masterly ability with paint – at once delicate and vigorous.

Gallery 1 & 3 exhibits both artists work together. Hanratty’s monotone etchings and Kane’s colourful woodcuts work very well together, to create a joyful and uplifting exhibit. It is interesting to see that the despite Hanratty’s restrained palette, they are lively and energetic (due in some part to the choice of subject), while Kane’s colourful palette, are nevertheless at once restrained (in the carefully chosen lines) yet animated by the brilliant use of colour, a difficult thing to achieve.

Alice and Michael have been friends since their student days in the National College of Art in the 60’s and were among the leaders of the now legendary student revolt which catapulted Ireland’s once elitist art world into the 20th Century.

On leaving college they joined the Graphic Print Studios, set up by the artist Patrick Hickey and Liam Miller, of Dolmen Press , along with other well-known figures such as Anne Yeats, John Kelly and Pauline Bewick to name a few. A common thread amongst the members was that they were all primarily painters, which is fairly uncommon in today’s modular system of art education.

The exhibition was opened by the architect Shane de Blacam, who asked in his opening address, why there was no space dedicated to the display together of the work of great modern Irish painters “where we can understand fully and most importantly understand the country because of their work”. He commended Therry Rudin and Patricia Hurl, on bringing this wonderful and important exhibition to Roscrea. It continues in Damer House Gallery until May 29, and takes place as part of the Bealtaine Festival.