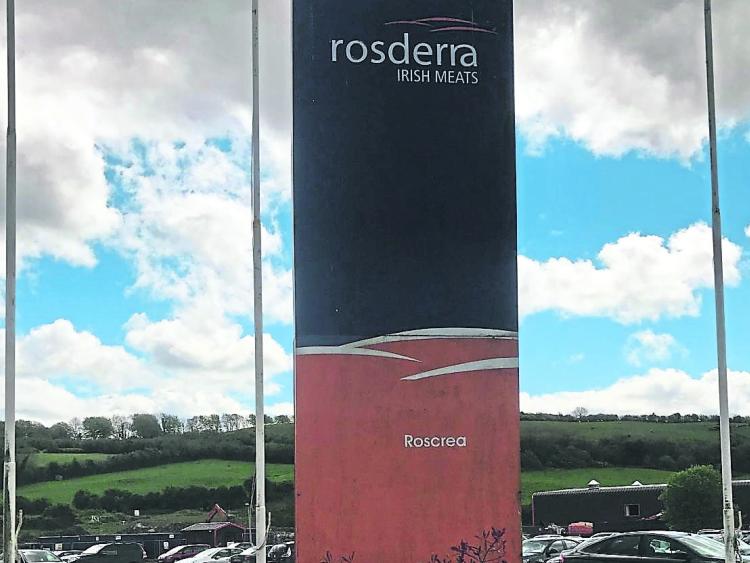 Food and public health authorities in China have suspended imports into their country's markets from the Rosderra bacon factory plant in Roscrea due to Covid-19 concerns.

The Roscrea factory, which accounts for over one third of Ireland's weekly national pig slaughter, is not expected to suffer any job losses and will recover from the ban which is hoped will be a temporary measure, local workers said this week.

In early May during the peak of the Covid-19 pandemic in Ireland, a Covid-19 cluster was detected among the staff of the bacon factory in Roscrea and raised in the Dáil.

Laois/Offaly TD and Sinn Féin spokesperson on Agriculture, Brian Stanley told the Dáil that approximately 120 cases of Covid-19 have been reported among the staff of Rosderra Meats in Roscrea and he called on the Minister for Agriculture to urgently put in place plans for meat factory inspections as further outbreaks in similar factories around the country began emerging.

The Roscrea factory employs 400 people, the majority of whom are foreign nationals and is one of the longest surviving industries in the town, which has been synonymous with bacon processing since it's construction in the 1980's.

At the time Rosderra Meats said all staff in Roscrea were tested by the HSE after concerns about the virus at the facility and issued a statement confirming a number of its staff tested positive for Covid-19.

Subsequently, a retest program was enacted a number of weeks after the initial cluster detection, where all production floor staff were tested by the HSE at a test centre in Roscrea over a week in June.

Following the news that imports to China have been suspended, a statement to AgriLand from Rosderra Meats said all their plants are fully regulated by the Department of Agriculture and that "stringent" control measures to protect workers are in place.

The company stressed they have implemented “stringent and detailed control measures and protocols” to ensure staff safety throughout the Covid-19 pandemic.

“Our sites are fully regulated by the Department of Agriculture, Food and the Marine which, as is normal practice in the sector, has its own representatives on site at all times,” a Rosderra spokesperson said.

“From the outset of the Covid-19 crisis, in conjunction with guidelines from the relevant authorities and in consultation with union officials, Rosderra Irish Meats has implemented stringent and detailed control measures and protocols to ensure employee and Department of Agriculture staff safety”, the company said.

The suspension of the Roscrea plant’s licence for exporting to China is “likely to be temporary” and is “unlikely to have a major impact” they said.

The plant in Roscrea is the smaller of Rosderra’s two plants and the larger facility is located in Edenderry. While some pigs may be redirected towards Edenderry, Roscrea is continuing to operate and supply the domestic market here and other export markets in the EU and rest of the world.